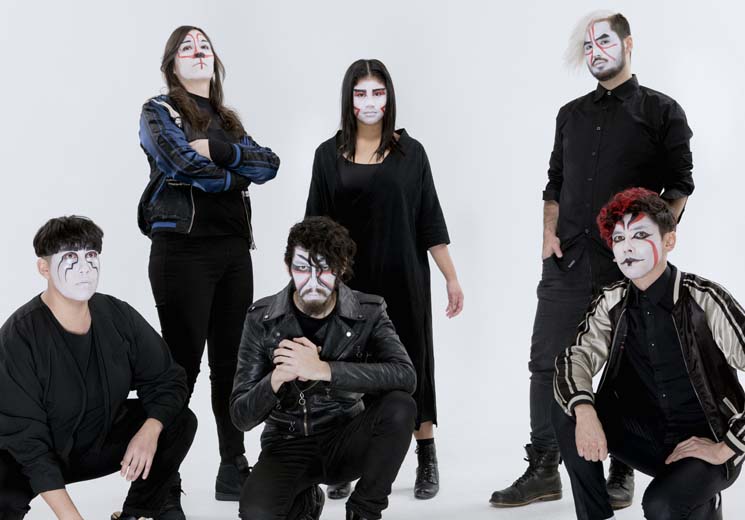 Alaska B, percussionist, songwriter and sole original member Yamantaka // Sonic Titan, can’t help but see their second album, 2013’s UZU, as a record made out obligation, removed from the communal creative drive and energy that the band captured in Montreal back in 2007.

“UZU had a grant. It had a label. It had to be made no matter the time,” she says. “There are tons things on it that I’m proud about, but while the first record had no expectations, UZU had all the pressure.” It’s a stark contrast from their self-titled debut, which Alaska describes as “a love letter to my friends and collaborators.” They went into that initial process with one goal: “Let’s make the best album we can out these snippets and songs we’d played from our various one-f shows.”

For their new album, Dirt — a conceptual lost soundtrack to a 1987 anime film — Yamantaka // Sonic Titan feel like part a community again, this time in Toronto. As a result, the record finds them at their most musically complex, conceptually dense and heaviest yet.

Success arrived unexpectedly for the band in 2011, following the release their debut, just as Alaska relocated from Montreal to Toronto. Caught between two cities, when it came time to record followup UZU, the band became more insular in an effort to make up for that distance. It’s that insularity to which Alaska attributes friction that led to the departure vocalist (and co-founder) Ruby Kato Attwood and guitarist John Ancheta in 2015.

Though much was made about their departure three years ago, looking back, Alaska sees a quest for stability as the enemy their creativity. “People see us as a band, but there’s also the collective element, and that’s the part that doesn’t really get seen by the media,” she says.

It’s unclear whether Yamantaka would have continued following Attwood and Ancheta’s departure had Alaska not committed to making the score for videogame Severed; doing so is what prolonged YT//ST long enough to set members on the path toward Dirt. Alaska and remaining members Brendan Swanson and Ange Lt finished the score alongside Pantayo, the Filipina-Canadian all-women kulintang ensemble, who gelled so well while writing and recording Severed that Pantayo member Joanna Delos Reyes joined on as Yamantaka’s new vocalist.

As an exclusively Toronto-based group, Yamantaka were also establishing connections within the city’s arts community, as they had in Montreal. Hooded Fang’s April Aliermo recommended bassist Brandon Lim ( noise rockers HSY), who immediately hit it f with Alaska and the band. Joining in on guitar was shredder Hiroki Tanaka, who had been in the running to be Yamantaka’s guitarist back when he lived in Montreal and serendipitously moved to Toronto at the right time.

Alaska says that having all the members the band in the same city again “really galvanized us in this new way. We had been kind lost after being disconnected from being a Montreal scene band.“

Beyond just strengthening their ranks, writing the Severed score influenced what the band would do next. “We were just so exhausted from doing a long-form score where there are no hooks,” recalls Alaska. “We just wanted to do something like Sheer Heart Attack by Queen: a straightforward third record that’s just boom, boom, boom, boom.”

They started work on Dirt with that lean Queen framework in mind, giving them an anchor for a weighty album concept that they’d developed long before even writing a note. “The concept comes first and the music bends to the will the concept,” explains Alaska, who drew on her background in animation to create character designs, timelines and 3D models cities for the imagined anime the album accompanies.

Dirt is strongly linked to the albums that came before it, existing in the same fictional space as the previous two: Pureland. “We imagine Pureland as a place to investigate issues around race, because we can’t have a straight conversation in the world we have,” Alaska explains. Pureland has become a place for the band to interrogate and celebrate their own identities outside any colonial space.

Taking place 10,000 years after UZU‘s floods and drawing on Lt’s Haudenosaunee heritage and Alaska’s Buddhist background, the album traces the discovery an exodus ship, called the A’nó:wara, making reference to Space Battleship Yamato, Event Horizon, Judas Priest and early 2000s pop like Jordan Knight in the process. On paper, it sounds like a scattered mess, but this constellation influences makes perfect sense to them, as if their music feeds f the conflicts and tensions these varying styles, traditions and sounds make when juxtaposed.

“Nothing we do is authentic,” muses Alaska, who believes it’s important to place what the band is doing outside tradition. “We’re not actually engaging with our traditional histories. We embody them, but we’re not trying to perform traditional things. Our intent is always to be somewhere else, somewhere different. We’re our own thing that can only exist through the sharing these ideas.”