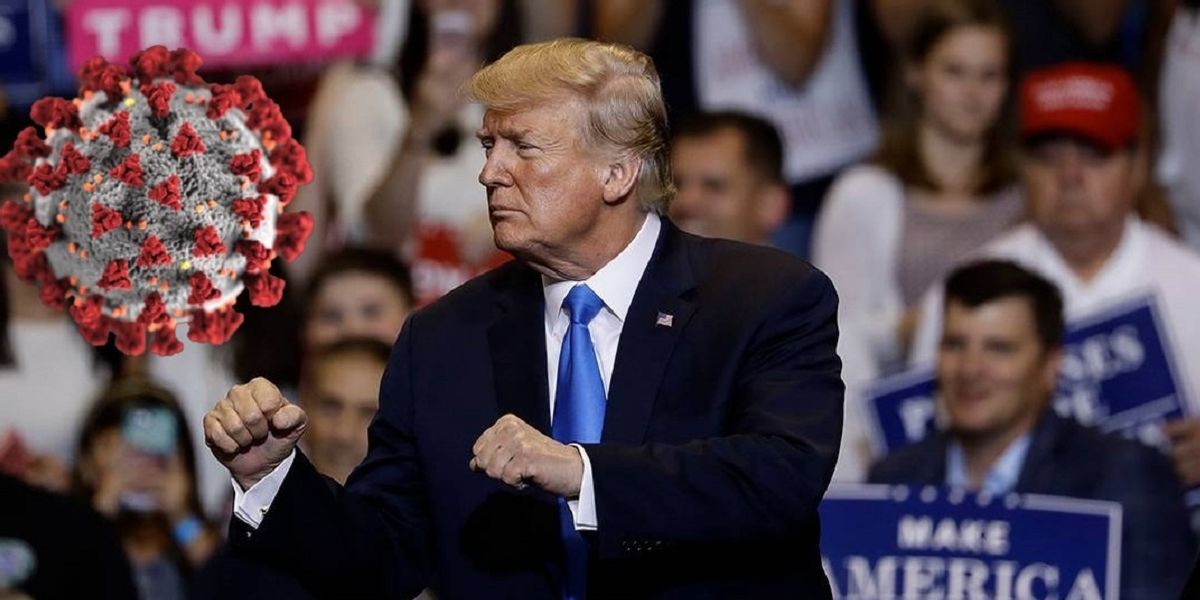 In the early hours of Friday morning, the White House announced that President Donald Trump and first lady Melania Trump had both tested positive for COVID-19.

The news came shortly after it was confirmed that top aide Hope Hicks had tested positive after weeks of travellng with the president to campaign events. As a result, Trump’s reelection campaign has canceled a number of upcoming campaign events in battleground states.

The idea of a sitting president contracting a life-threatening virus around a month before the 2020 election seems like the definition of a so-called “October surprise.” But honestly, Donald Trump’s reckless behavior in recent weeks—holding public rallies around the country, including a crowded indoor event in Henderson Nevada—makes his diagnosis substantially less surprising.

Of course, during Tuesday night’s debate, Joe Biden expressed concern about that exact issue, noting that the president has “been totally irresponsible in the way in which he has handled the social distancing … basically encouraging people not to [wear face masks]” at these events.

Trump, of course, responded by mocking Joe Biden for wearing “the biggest mask I’ve ever seen” and insisted that—in terms of his rallies and the risk of spreading COVID—”so far we have had no problem whatsoever.” Less than 24 hours later, Donald Trump was at yet another rally in Duluth, Minnesota, where unmasked people were standing shoulder to shoulder.

Leaving aside the fact that Trump’s “great friend” Herman Cain tested positive for COVID-19 just nine days after attending Donald Trump’s Tulsa rally without wearing a face mask—dying soon after—and the fact that the state of Oklahoma saw a massive spike of COVID cases in the weeks following the event, it should finally be impossible for Trump to claim they’ve had “no problem.”

That said, with an incubation period of up to 14 days, it would be unlikely—if Hope Hicks and the president had contracted COVID-19 in Duluth on Wednesday—for a test to come back positive so quickly. But that was the fourth rally the campaign has held in the past two weeks. Either of them might have been exposed in Pennsylvania, Virginia, or Florida.

But all of this ignores one confounding possibility—that this whole story might be just another Trump lie.

The Case Against COVID

Donald Trump has made it a regular practice to introduce some major disruptive news any time a negative story about him is dominating the cycle. Often that includes outright lies.

For the last few days, the story of “the worst debate ever”—mainly the result of Donald Trump constantly interrupting and talking over both his opponent and the debate moderator—has been all cable news wants to talk about. Even Brian Kilmeade—among Tump’s biggest fans at Fox News—has expressed some criticism of the president’s performance.

With the election so near, Donald Trump and his team have made it clear that no tactic is too deceptive or underhanded for them to employ if they think it will help him win. So if Trump wanted to disrupt the continued analysis of that awful debate, what are the potential advantages of faking a COVID diagnosis?

For a start, now that he is reportedly ill and faces potentially dire health consequences, any criticism of how he has mishandled the pandemic (including this article) will be easy for his defenders to characterize as cruel politicization of the president’s health.

It delivers a more or less guaranteed opportunity to demonize the media—one of Donald Trump’s favorite methods for energizing his base—while also ensuring more neutral/positive coverage than he has gotten in recent days. If it works well enough, it might even provide enough media cover for the senate to push through Amy Coney Barrett’s controversial nomination to the Supreme Court.

It could also rewrite the debate schedule. The second debate was originally planned for October 15th and will almost certainly be postponed or canceled. Maybe president Trump only wants to have one more debate. If he has a plan to come back from the disastrous first performance with some surprising tactics in one final debate—currently scheduled for October 22nd—Joe Biden will have no third round in which to adjust and counter.

Maybe he’s planning to pivot—yet again—to a more disciplined and presidential poise, so that if Biden comes looking for a similar fight, he will instead come across as the combative one. If President Trump returns to the debate stage with a subdued performance, as though he’s been humbled by a brush with his own mortality, perhaps he can win back some polite suburban voters who may have been turned off by his bullying debate style—though somehow not by every other aspect of his presidency.

Another advantage of faking a COVID diagnosis would be the opportunity to promote a supposed cure. If Trump claims that he took Chloroquine—or some other unproven treatment—after his diagnosis, and thus experienced only mild symptoms, he gets another chance to tout a “cure” that will soon have this global pandemic under control and the economy back on track. Even better, he can “brag” about how mild his illness was for him—painting himself as tough and healthy and affording another opening to attack Biden’s fitness.

This is roughly the approach that fascist Brazilian president Jair Bolsonaro—one of Trump’s closest international allies—took when he (possibly) contracted the coronavirus back in July. He was out shaking his supporters’ hands and promoting hydroxychloroquine amid conflicting reports about his diagnosis. Was it all a ruse? Is Trump following the same game plan?

On the Other Hand…

Of course, none of this is to say that President Trump definitely doesn’t have COVID. It’s a highly contagious virus, and his reckless behavior has put him at significant risk.

While there may be tactical benefits to faking a COVID diagnosis, there’s a lot of room for downsides as well—potentially inspiring his base to reconsider the threat of the virus and the value of the kind of strict lockdown procedures that could have prevented much of the pandemic’s impact in the US. If they start having those thoughts, maybe it won’t make so much sense to demonize liberal politicians for shutting things down while hundreds of thousands of Americans are dying…

That scenario may seem like a stretch—Trump’s base is far more likely to attribute this kind of news to a Chinese conspiracy to infect their hero than to any GOP incompetence—but the point remains that news of this magnitude shifts the political narrative in unpredictable ways. Would Trump and his campaign really take the risk of faking something like this, even with the chance that it could turn against them?

Who knows? Whatever the arguments on one side or the other, the biggest reasons to question this story—and invest in all this conspiracy theory-logic—are the same reasons we should have learned by now to doubt nearly everything: We can’t trust Trump, and we can’t trust 2020.