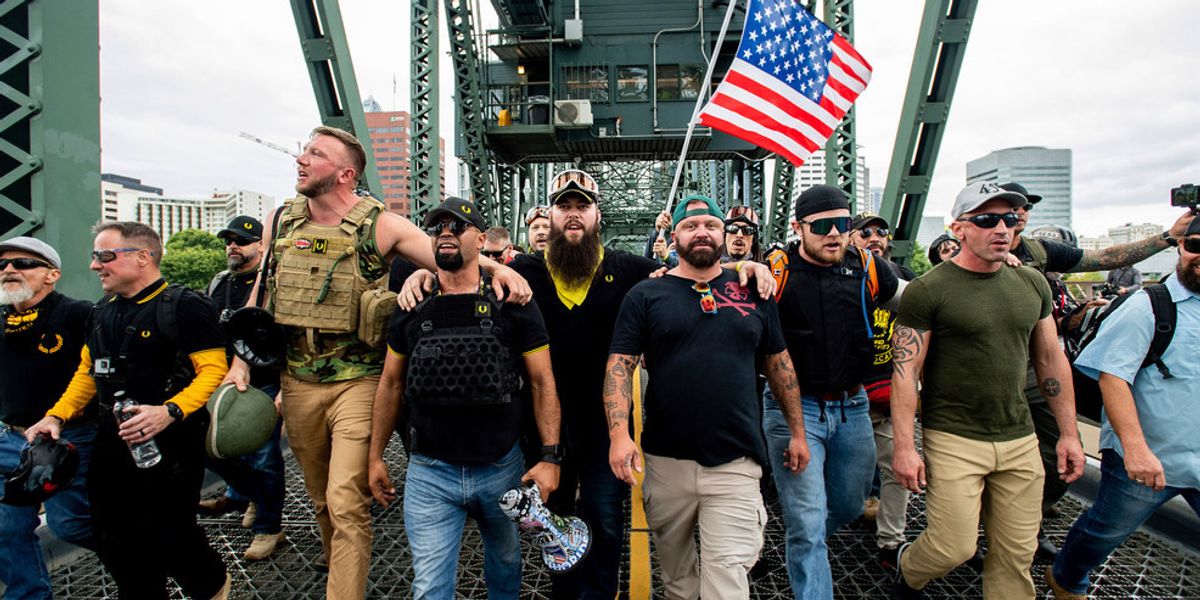 In what has been called “maybe the worst presidential debate in American history,” Trump’s constant interruptions of both Biden and moderator Chris Wallace did very little to expand his appeal beyond his existing fervent fan base. The president also repeatedly tried to associate Biden with the radical left—a statement that is simply not true. And while Biden kept a relatively calm composure, he missed a few key talking points, his most memorable quote being “Will you shut up, man?”

But the most disconcerting moment in the debate was when President Trump blatantly failed to denounce white supremacy.

“You have repeatedly criticized the vice president for not specifically calling out Antifa and other left wing extremist groups,” Wallace said to Trump. “But are you willing tonight to condemn white supremacists and militia groups and to say that they need to stand down and not add to the violence in a number of these cities, as we saw in Kenosha and as we’ve seen in Portland?”

After a few moments of fumbling and putting the blame on left-wing groups, Trump’s response was: “Proud Boys, stand back and stand by.”

Social media was immediately flooded with people voicing their concerns. While Trump has clearly displayed white supremacist behavior throughout his presidency, this is perhaps the most blatant example of all. The aforementioned Proud Boys have reportedly been celebrating Trump’s apparent endorsement—but who are they, anyway?

The Proud Boys are a far-right, all-male extremist group that was formed in 2016 by Gavin McInnes, who describes the organization as a “pro-Western fraternal organization.” Though they firmly denounce any accusations of racism (even filing a defamation lawsuit after being categorized as a hate group), they have been described as violent, nationalistic, Islamophobic, transphobic, and misogynistic. Though they deny any connotation with the alt-right, some of their core values include “anti-political correctness,” “anti-racial guilt,” and “reinstating a spirit of Western Chauvinism.”

In its early months, the Proud Boys veered away from begin just a men’s club and began growing into a flat-out, far-right extremist group that lived up to McInnes’s longtime racist ideals. “I love being white and I think it’s something to be very proud of,” McInnes told the New York Times in 2003. “I don’t want our culture diluted. We need to close the borders now and let everyone assimilate to a Western, white, English-speaking way of life.”

In his detailed plan for the Proud Boys, McInnes stated that members would be sorted into nationwide chapters, and that each member can be sorted into one of three ranks. To achieve the first rank, you must publicly declare your pride in being a Proud Boy. The second is to receive a brutal beating while reciting five breakfast cereal names, and the third is to get a Proud Boy tattoo. “It’s very freeing to finally admit the West is the best,” McInness wrote. “That’s because it’s the truth.”

No matter what accusations you might hear about violent protests supposedly escalated by Antifa, violence has been a major aspect of the Proud Boys’ M.O. since their inception. A notable ex-Proud Boy is Jason Kessler, the founder of the infamous Unite the Right Rally in Charlottesville, Virginia in 2017. Many Proud Boys attended the event, which resulted in the death of a counter-protester named Heather Heyer.

More recently, the Proud Boys have had a significant presence in the current protests and rallies in Portland, Oregon. Their involvement in Black Lives Matter protests has revealed that they feel a duty to assist law enforcement officers.

And now, with fairly explicit approval from Trump, the Proud Boys feel a renewed sense of responsibility to further uphold their xenophobic beliefs.

“To say Proud Boys are energized by [Trump’s statement at the debate] is an understatement,” Megan Squire, a computer science professor who tracks online extremism, told NBC News. “They were pro-Trump before this shoutout, and they are absolutely over the moon now. Their fantasy is to fight antifa in his defense, and he apparently just asked them to do just that.”

Screenshots of the Proud Boys’ Telegram, a private messenger app, evidence their glee following the debate.

The Proud Boys are ecstatic tonight about getting mentioned in the debate tonight.

“Trump basically said go f*ck them up,” member Joe Biggs wrote. “This makes me so happy.”

If you were somehow unsure of Trump’s white supremacy before, hopefully this alarming situation helps clear it up.