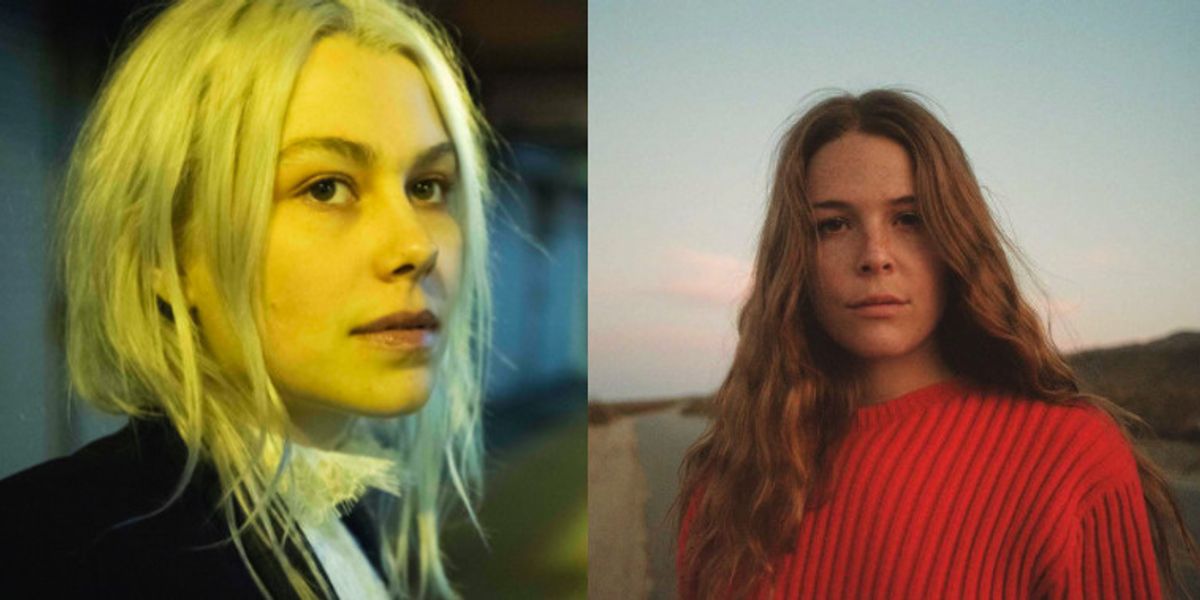 “And I don’t want the world to see me, cause I don’t think that they’d understand,” sing Phoebe Bridgers and Maggie Rogers in perfect harmony.

The musicians, who have both settled into a sweet spot between pop stardom and indie credibility, recently released the cover that none of us knew we needed.

Like a lot of what Phoebe Bridgers releases, it’s heartbreakingly beautiful, a little bit tongue-in-cheek, and made even edgier thanks to political overtones.

All Bandcamp proceeds from the song will go to Stacey Abrams’ Fair Fight organization, which is fighting voter suppression in Georgia. “Fair Fight promotes fair elections in Georgia and around the country, encourages voter participation in elections, and educates voters about elections and their voting rights,” reads a summary on the artists’ Bandcamp page.

“Fair Fight brings awareness to the public on election reform, advocates for election reform at all levels, and engages in other voter education programs and communications.” Fair Fight’s work is vitally important this month, as the state prepares for the all-important Georgia runoffs, which will decide the fate of the Senate.

As if all this wasn’t enough, the song’s cover art is an overtly political riff on a popular meme. In the image, a blonde woman (labeled Phoebe & Maggie) pours milk (Iris by the Goo Goo Dolls) into the mouth of a brown-haired girl (The Revolution). Phoebe and Maggie, it seems, are down for the cause.

Rogers’ presence on the cover is a welcome surprise. Her voice—warmer and twangier than Bridgers’—is the perfect complement to the latter’s light, breathy tones, and altogether, the cover is a folk-pop gem.

This writer has only one complaint: It would’ve been excellent to hear Bridgers belt out the lyric “Yeah, you bleed just to know you’re alive,” which took on a more subdued country twang with Rogers on the verse, but we’ll take what we can get.

The whole thing started, as most things do with Phoebe Bridgers, with a tweet. On November 3rd, as the world held its breath waiting for the results of the 2020 U.S. election, Bridgers tweeted, “if trump loses I will cover iris by the goo goo dolls.”

Now, with Biden having achieved 290 electoral votes, it’s clear that he is the winner. Still, despite Biden’s win having been officially projected on November 7th, it took Bridgers until November 12th to release the cover. It’s well worth the wait.

Among those waiting for the song’s release were the Goo Goo Dolls themselves. On November 10th, the band tweeted a gif of Judge Judy with the message “we’re waiting…”

The Goo Goo Dolls’ “Iris” was released in 1998. It was originally written for the soundtrack for the film City of Angels, but was featured on the band’s album Dizzy Up the Girl. Over 20 years later, it remains an iconic indie rock staple, an undeniably cathartic tribute to unrequited love. When the lyric “I just want you to know who I am” hits, it’s impossible not to start crying or screaming along, if only in your head.

Today, “Iris” remains the Goo Goo Dolls’ biggest hits (and one of the genre’s biggest hits of all time), but the band has continued to release music. Most recently, they spoke to Popdust about their newly released Christmas album, and even discussed “Iris” and its enduring legacy.

Bridgers’ and Rogers’ version is sadder than the original, but it contains the same sense of extreme desperation, making it a worthy cover. It’s certainly not the first time the song has been covered, though. In 2012, Popdust wrote an article called “Today’s Pop Stars Really Love Covering ‘Iris’ by the Goo Goo Dolls,” featuring versions by The Wanted, Beyonce, Taylor Swift, and Kelly Clarkson.

For Bridgers, the song marks yet another venture into the realm of vintage rock covers and star-studded collaborations. The songwriter has previously covered songs by The Killers, Neutral Milk Hotel, and numerous others, and has collaborated with the likes of Conor Oberst, Julien Baker, Lucy Dacus, The National, The 1975, and many more. This fall, she announced the debut of her record label, Saddest Factory.

In addition, the ever-prolific Bridgers recently announced that she’ll be releasing an orchestral version of her brilliant latest album, Punisher, and dropped a heady, synth-laden version of “Kyoto.”

But thankfully for us, Bridgers has taken some time away from her busy schedule to feed the revolution, and for that we can only be grateful.

Interview: The Goo Goo Dolls Know Holiday Albums Are Sappy—They Made One Anyway

Joe Biden Won the Presidency—How Do We Get Rid of Trump?