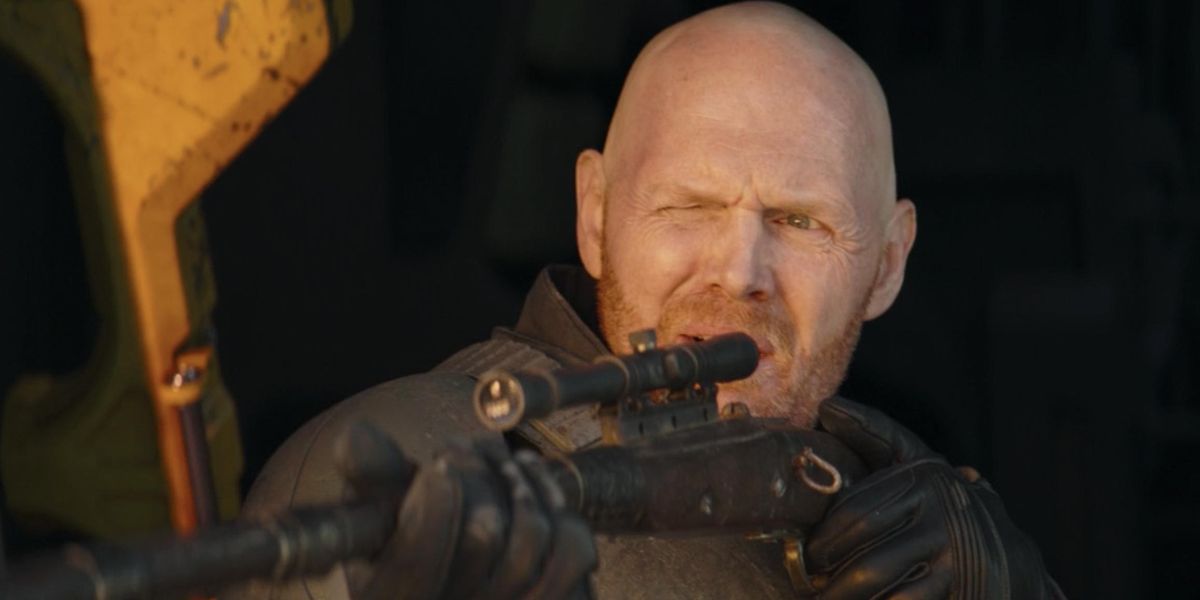 The Mandalorian, “Chapter 15: The Believer” (written and directed by Rick Famuyiwa) premiered Friday, December 11th on Disney Plus.

With only one more episode remaining in Season 2, fans will likely be disappointed that Chapter 15 barely hits 32 minutes, excluding credits. And let’s be honest, not a lot happened. “The Believer” did however unexpectedly treat us to what is probably the best dramatic performance of the series: Bill Burr (returning) as Migs Mayfeld.

Let’s talk Mayfeld and breakdown the best and worst moments of The Mandalorian, Season 2, Episode 7.

Given how exciting it was to watch peak level Ahsoka and Boba Fett in live action in the previous two entries, it’s no surprise that Chapter 15 is being called “filler” by some, and a “return to formula” by others. But it sure was damn good to look at, and I’m not just talking about Pedro Pescal’s adorable mug.

Grogu remains in Imperial custody and Din Djarin (“Mando”), accompanied by Cara Dune, Boba Fett, and Fennec Shand need help from someone that infiltrate an “internal Imperial terminal” to access Grogu’s coordinates. Enter Migs Mayfeld (Bill Burr), the ex-Imperial officer last seen in “Chapter 6: The Prisoner.” This time around, Mayfeld is the one in a New Republic prison, serving time for the events of Chapter 6.

Hey, what if the showrunners had this all planned out since Season 1, and Mayfeld was the character “The Prisoner” was actually referring to? I highly doubt it, but bravo! In that case, maybe we’ll figure out who from this episode “The Believer” was referring to in Season 3, because I have no idea.

Anyway, Din and gang arrive on Slave I – with Boba Fett sporting a fresh new coat of paint – to spring Mayfeld. The team then heads out to infiltrate a refinery in a secret Imperial mining hub on Morak. Most of our heroes have to stay back because the Empire could identify them as affiliates of the New Republic, providing Boba Fett the opportunity to drop the best line of the episode: “Let’s just say they’ll recognize my face.” (The script turns and winks to fans.)

There they use the old ‘uniform switcheroo’ to hijack a shipment of rhydonium – a highly combustable starship fuel that the empire is harvesting.

Did anyone else find it odd that Din’s voice sounded exactly the same in the trooper helmet as it does in his own? I always assumed the subtle distortion on his voice came from the Mando lid, but Mayfeld sounds normal in his Imperial getup.

Once they’re on the road, the show starts a discussion of the morality of war and ethics of allegiances. I initially prepared to give this a Liz Lemon-style, epic eye-roll, but Rick Famuyiwa handles the themes a lot more competently than Rian Johnson in The Last Jedi.

Where the episode succeeds is in its ability to make the “both sides are bad” argument personal and grounded in the human experience. This is where Bill Burr really shines. He transitions seamlessly from joke-cracking one moment to sincere and serious reflection the next.

When Burr’s being funny, it’s believable and fitting for the character. Whether it’s excitement to be around humans and out of prison or escapism from memories of warfare, Mayfeld feels a constant need to break the silence.

Burr’s performance is particularly magnetic in a later scene, when Mayfeld is forced to sit face to face with his former commander in the Empire, Valin Hess. Confronting Hess triggers horrifying memories of “Operation Cinder,” which fans of the video game Star Wars: Battlefront II will recognize as the bloody event in which Imperial leaders murdered their own as punishment for the death of Emperor Palpatine.

Mayfeld, haunted by memories of the Empire

“All heroes of the Empire,” Hess retorts, claiming it was all a sacrifice for the “greater good.”

The tension in this scene is insane. We don’t often get any of the real human drama of war in Star Wars, and here, it was handled extremely well. You could read Mayfeld’s pain in Burr’s face. Din is looking back and forth nervously at the men as the conversation builds dangerously to a breaking point.

Where the episode fails, and its themes fall on their face is the end-escape, when Mayfeld goes out of his way to make sure every last Imperial at the base is dead.

He spent half of the episode arguing that human life is valuable, regardless what side you’re on or what creed you keep. Then the second they take fire from Imperials, it’s “oh, never mind, kill every last one of them.”

Sure, you can argue that killing Valin Hess was justified retribution for murdering innocent people in Operation Cinder. But blowing up the entire base, full of low level officers?

There was actually an amazing moment in this episode where TIE fighters fly in and rescue Din and Mayfeld. It’s the only time in Star Wars where the audience is meant to cheer for Imperials. You want to kill those pilots too? The ones that saved you?

It ain’t Star Wars if everything doesn’t explode…

This isn’t the first time Star Wars under Disney has attempted to humanize the “bad guys,” just to forget it in the next scene. *COUGH* FIN *COUGH*

Star Wars is capable of exploring these topics, and arguably achieved it with The Clone Wars animated series. Seems they need to try harder in live action to follow through with the themes they set up.

In the end, Mayfeld is granted his freedom and departs to build a new life and identity separate from the Empire or New Republic. While a happy ending for the character, it’s kind of a bummer that this was likely a series wrap on Bill Burr. “Chapter 15” was short, and had some flaws, but it was tremendously effective in making us love Mayfeld.

Since Disney is apparently giving every other character in Star Wars their own show I’d like to personally petition for Bill Burr to get one as well. “Mayfeld, streaming on Disney Plus, November 2023.”

7/10 episode – amazing it was above a 4/10, given that it’s the first and only episode of The Mandalorian with not a single appearance from Grogu.

We’re already on to the season finale. With two super short episodes now behind us, and OVER A YEAR until Season 3 premieres, we better get a long Season 2 finale. I’m talking nearly 90 minutes. Come on, Disney.

We know Din, Cara, Fennec, and Boba have Moff Gideon’s coordinates and are in a hurry to rescue Grogu. I swear, if half of the finale is them going to Frog Lady or Amy Sedaris to recruit help, I’m going to rip my hair out. Actually, I like Frog Lady.

There’s basically three main questions the next episode will answer:

That last one is a bit dark, but everything points to this season ending with tragedy and a MAJOR cliffhanger, Empire Strikes Back style. My money is on Boba Fett dying in an awesome sacrifice (leaving Slave I to Din), our heroes failing to rescue Grogu, but then in the final moments, a young Luke Skywalker arrives and promises to help. Cut to black.

Tell me that wouldn’t rule!