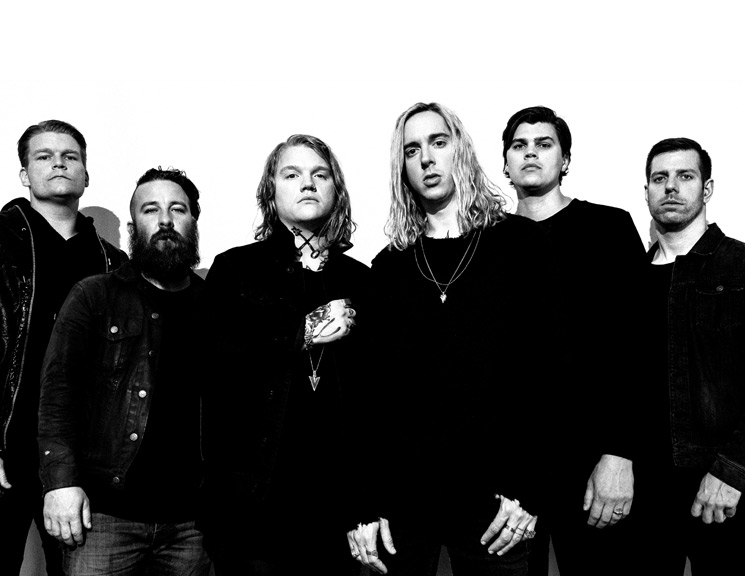 When Underoath were writing new album, Erase Me, there was one rule — and it was the polar opposite the one they built their career on. After spending years vetoing parts or songs with the phrase “that’s not Underoath enough,” the band members’ lone rule was that they couldn’t say that.

Perhaps that’s because what Underoath are isn’t as cut-and-dry as it once was; these one-time leaders Christian metalcore are hardly either those things anymore. Their shift away from the Christian label isn’t exactly news — the band have moved from a faith-fuelled band to one simply comprised Christian members earlier — but this is the most brazen they’ve ever been, referencing some the players’ abandonment and disenchantment in press releases and interviews.

“The worst years my life — the most miserable years my life, the years I got treated the worst and was the most alone and made the most mistakes my life — was when I was a quote-unquote Christian,” vocalist Spencer Chamberlain tells Exclaim! “It was the hardest, most difficult time my life, and that’s the opposite what it’s supposed to be.”

In his decade with the band, from joining in 2003 to their breakup in 2012, they went from homogeny to being torn apart. “When we started f, we weren’t allowed to have different personalities. We all ate the same food, we all dressed the same, we listened to the same bands, and that’s just super unrealistic. I feel like different people at different times have experienced different ups-and-downs in life and took different paths. and we all let the whole thing fuck us up in different ways, and then we recovered from them in different ways, and everyone stands in a different spot, and we don’t speak for each other as far as religious beliefs go.”

The disparity that exists within the band allows electronics expert Chris Dudley to have “Christ follower” in his Instagram prile, while Chamberlain occasionally swears in lyrics. The Christian community reacted negatively to that, perhaps predictably, which the vocalist calls “one the million problems” he has with the faith.

“We could be arguing about so much fucking cooler stuff than whether some guy says a word or not — like, grow up,” asserts Chamberlain. Despite strong feelings on the matter, he says he’s not angry at Christianity, and reminds us that the band only ever wrote one song about “the guy who loves everyone and treats everyone as equals”: 2004’s “Some Will Seek Forgiveness, Others Escape,” which name-checks Jesus.

With that considered, the lyrics on Erase Me aren’t far f from the personal poetics upon which they built their career. Take the track “ihateit,” from which they titled the album, for example.

“At that point, I’m singing about how I was really confused for a long time if I was a drug addict or I just liked using drugs,” notes the singer, while revealing he’s been f them over a year now, the longest since he started touring. “I was like, ‘Dude, this sucks. I’m terrible, just erase me.'”

The song also serves as a solid case study for the band’s musical evolution, with its focus more on calmer crescendos than chaotic calamity. Penned during one two early writing sessions between Chamberlain and original drummer/vocalist Aaron Gillespie, who exited the band in 2010 and didn’t play on their last LP, Ø (Disambiguation), though he returned for their 2015 reunion. These writing sessions happened in secret after that “Rebirth Tour,” with Chamberlain flying to Salt Lake City to write with his long-time best friend, unsure whether Underoath would even want to do a new album.

“The demo, it’s funny — maybe I’ll release it at some point so kids can hear it and how far it went — it was a lot slower and less electronic, obviously, because Chris hadn’t touched it. It was just me on guitar and bass and Aaron on drums and me singing and Aaron singing the pre-chorus like he does on the record. The vocals were pretty much the same as they ended up being, but however long ago we wrote that song, it was slow and kind sludgier, and it almost sounded like Soundgarden. It was interesting. We sped it up and Chris got on it and Tim put his guitar noodling stuff on it, and it really came alive.”

Clashing between the band’s two writing teams (Chamberlain and Gillespie, who have historically pulled for more melody versus wielders weird Chris Dudley and guitarist Tim McTague) helped shape their sound in the past, but this time around it was working together that did it. Chamberlain even notes, “It’s the first time in Underoath history where we ever worked together, not fought through the whole process, and made a record where we’re proud every song.”

That includes “Wake Me,” the perfect illustration for the collaborative nature this album. Originally something Chamberlain was working on alone, not even for Underoath, he says he can’t believe it made the record.

“It’s obviously the poppiest song on the record. I was just surprised to hear that Tim, who hates that kind shit the most, that was one the songs he picked when we are all sharing demos. He was like, ‘Dude, we should work on that song. That’s such a good song. I don’t know if it’s us, but it’s such a good song.’ I was really surprised that that song made the record, because it shows a lot maturity from some the other bandmates to even want to work on it to get it to where it was and sounds more like an Underoath song.

“We didn’t want to abandon heavy, but we wanted to do heavy, new, like we did in 2006 with Define the Great Line. This is just not what people are going to expect and they didn’t expect what we did in the past, and they’ll never expect what we’re going to do, and I think we just stayed true to ourselves. We made stuff that stoked us out and if it doesn’t stoke you out, so what? You can still listen to our old shit. We’ll still play all those songs at shows. This is our new record in this direction we’re going, and we’re really happy with it and the most proud we’ve ever been. I think it’s heavy in a different way. It’s Underoath in 2018.”

Erase Me comes out April 6 on Fearless Records.