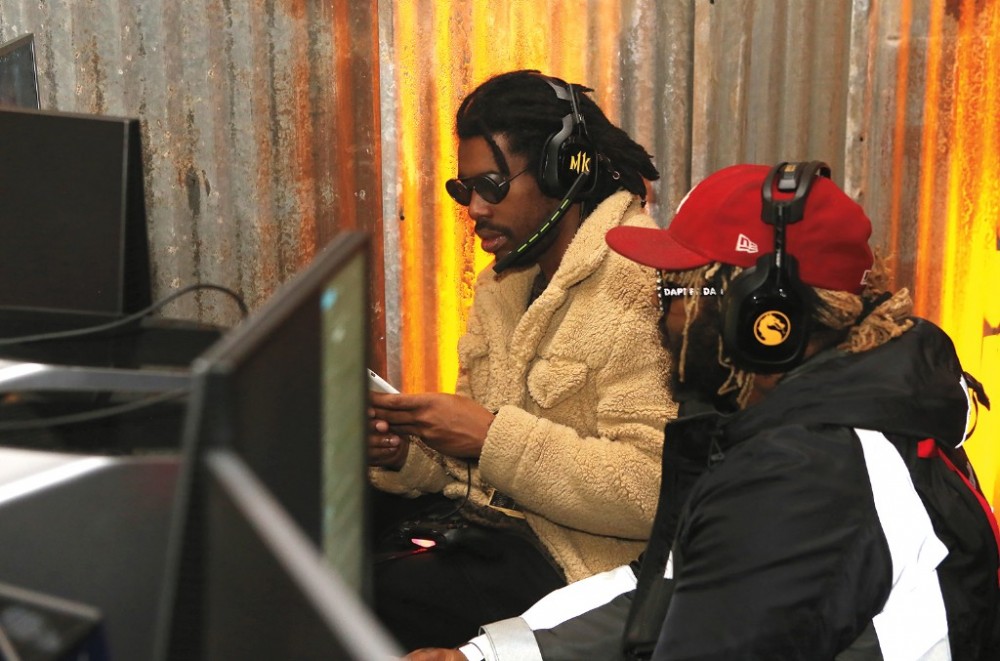 When producer and Brainfeeder label boss Flying Lotus first worked with renowned bassist Thundercat in 2011 on his debut album, The Golden Age of Apocalypse, the duo was tempted to lean on Auto-Tune. Nearly a decade later, Thundercat’s falsetto is stronger than ever on his upcoming album’s second single, “Dragonball Durag.” Says Flying Lotus: “He wasn’t excited about singing when we first met. Now he has turned into that motherfucker.”

The pair had met at South by Southwest around the time the producer released his own debut album — and quickly formed a deep connection. In 2008, Flying Lotus (born Steven Ellison) founded his label Brainfeeder and signed Thundercat to its roster, which has gone on to include acts like Teebs and Kamasi Washington.

Come April 3, Thundercat (born Steven Bruner) will release his fourth album, It Is What It Is, entirely produced by Flying Lotus. It’s a tight, reflective project, influenced by heartache and loss, specifically the 2018 death of close friend and collaborator Mac Miller. But Thundercat says that even though the album came together “under unfortunate circumstances, it’s still beautiful.”

What are you proud of with this album?

Thundercat: I’m proud that there is an album, period. Kamasi [Washington] used to say it to me: “Any day you get to play your instrument is a good day.”

Flying Lotus: It’s such a somber record in a lot of ways. There are a lot of possibilities with bangers and dance songs — music he can make that’s more accessible and easily enjoyable. But with this record, he had to be honest. He took the darker path, and it’s beautiful. His songs are deceptively complex. It can seem like not a lot is happening but the changes are really difficult, on some music theory stuff. Like “Dragonball Durag,” that’s a hard song to sing.

Lil B is featured on the album; Thundercat, did you two bond over cats?

Thundercat: He’s an animal person in general. One of my favorite Lil B songs is “I Love You”— it’s him in the pet shop, tripping out. The first time I met Lil B, he pulls up to my apartment in a f–king Fiat, this small Steve Urkel car, with Chinese food. My door’s hanging open, two feral cats, the windows are all shot out because I was shooting Airsoft guns, DVDs all over the floor.

He sits down and we had a talk about life — something intense had just happened to him and he was kind of tripping out. From then, we’d always say, “We gotta figure out making some music.” I wanna do a whole album with Lil B singing and me playing and singing his backgrounds. No rapping. That’s a dream, to create music to Lil B’s voice.

Ty Dolla Sign is also featured on this album, how did he get involved?

Thundercat: Me and Ty have been friends for years. We started out together in the group Sa-Ra Creative Partners. Before Ty was Ty Dolla Sign, we would write music together. He played bass too and we would sit and play bass together. At different points in life, we’ve looked up from the trenches of the industry and it’s like, “Hey, I can still see you.”

Ty’s been one of my biggest supporters. He expects better of me all the time and it pushes me a lot. He’s always wondering what my mind is about things — it’s like I’m the Bizarro Ty.

What complications arise when you mix friendship and business?

Thundercat: The reality is, you want that. You want somebody who cares. Closeness can breed contempt, and it can feel like somebody’s overstepping boundaries, but these are productive problems. My mom would say, “It’s going to hurt falling downhill or climbing uphill, but which way would you rather be going?”

Flying Lotus: I do believe that those relationships make the work better and deeper. It can get a little slippery. Running Brainfeeder has complicated my friendships. Me and Cat have been through shit that no one knows about, but I can always see past any kind of weirdness between us, because the work is the most important. I’ll fight for the work always.

How would you describe Brainfeeder?

Thundercat: It’s like-minded individuals who want to explore different places, who want something else. Lotus has always been a fine purveyor of other.

Flying Lotus: It’s a place for the misfits. A lot of people are doing things that are very same-y. And it’s great — let those people do that. I’m curious about the outsiders.

What advice would you have for someone starting a label in 2020?

Flying Lotus: Don’t! Don’t do it. Just run. I’m in a unique situation, and I have good people around me that I can trust 100% — but I don’t recommend it. A few years ago, I wasn’t as inspired and was thinking about stopping. But because of all our amazing new artists, we’re entering a second phase of the label.

A version of this story originally appeared in the March 28, 2020 issue of Billboard.