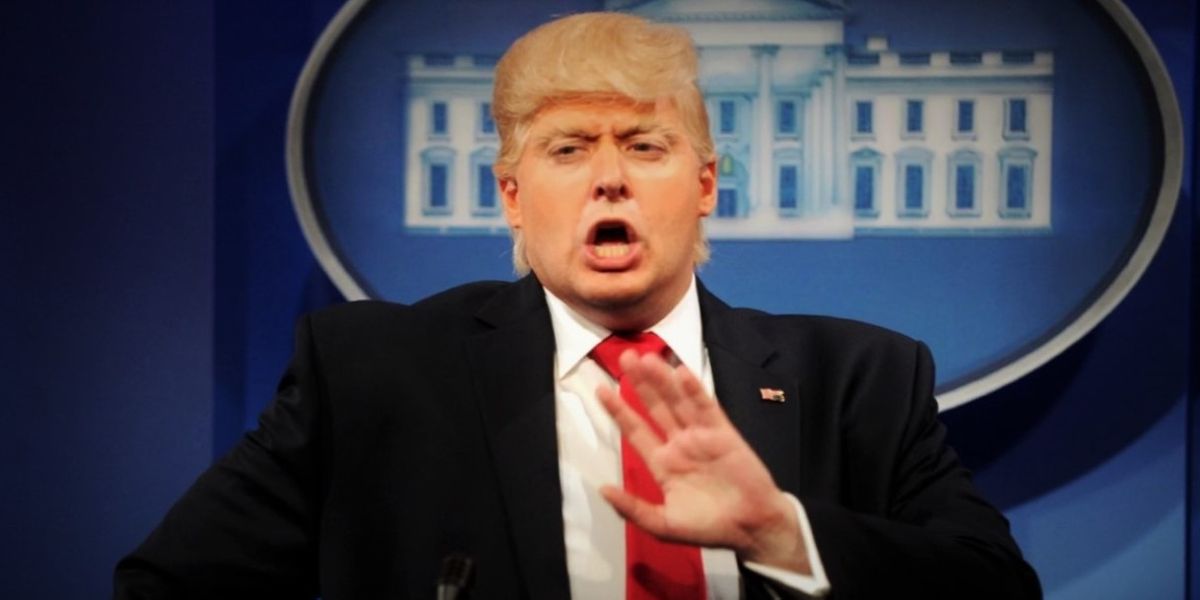 With the election behind us, and the Trump team’s spurious legal cases being thrown out of court left and right, it’s beginning to look like America will finally be able to leave the Trump era behind.

As many problems as we are still going to face after January 20th, it’s a relief to know that we will no longer have to think, “Oh, god, he’s the president…” every time Donald Trump says or tweets something offensive, dangerous, or moronic.

If he wants to spend the next four years sharing his thoughts on raking hurricanes or nuking wildfires, he will be able to do so from outside the White House, just like any other citizen. But with two more months of Trump administration to go, the world is still bracing to see what kind of stunts he’ll pull in his final days.

As such, there has never been a better time to acknowledge the people who have been so helpful at relieving some of the ever-present tension that has dominated each week since 2016. These are the comedic bits that have helped to make the intense chaos energy of Donald Trump a little easier to process.

Actor Mark Hamill is best known for his portrayal of Luke Skywalker in the Star Wars universe, but he’s also had an extensive career as a voice actor. The highlight of that career has been his portrayal of The Joker in a number of animated Batman shows, movies, and video games.

So when comedy writer Matt Oswalt pointed out how much Donald Trump’s New Year’s 2017 message to his “many enemies” read like the rantings of Gotham’s greatest supervillain, it was only appropriate that Mark Hamill would lend his iconic lilt and laugh to the text.

Since that first rendition of “The Trumpster,” Hamill has read a number of Trump tweets and quotes as The Joker, and it’s always amazing how much more sense they make when interspersed with bursts of maniacal laughter.

For all the praise Alec Baldwin has gotten for his Emmy Award-winning impression of Donald Trump on Saturday Night Live…it’s not actually very good. He purses his lips, squints his eyes, and gets a bit breathy as he generally acts confused and scared.

It works alright for a quick sketch, but it doesn’t reflect the man we have gotten to know as President Donald Trump. The real Donald Trump is unflappably confident, cruel, and antagonistic. His entertainment value for his fans is basically as an insult comic.

Anthony Atamanuik’s impression of Trump not only captures the speech patterns and physicality—right down to the weirdly stiff posture and jerky hand gestures—he also embodies the man’s aggressively unpleasant spirit, oozing misogyny, xenophobia, and a fundamental disrespect for anyone who isn’t him. And somehow he manages to make that funny.

In 2017, Atamanuik’s Trump impression earned him his own Comedy Central series, The President Show. But the peak of Atamanuik’s dates back to 2016 when he and James Adomian gave us the Trump vs. Sanders debate that the world sadly never got to see in real life.

Donald Trump wants you to think that he’s a tough guy, because he never hesitates to say something mean or cruel. But Donald Trump isn’t tough; he’s a mean girl.

He’s a catty, egotistical gossip who holds grudges, takes personal offense when people don’t fawn all over him, and loves to get as petty as possible. What Donald Trump is, is sassy. And Peter Serafinowicz helps that sassiness shine through by dubbing over Trump clips with a perfectly sassy voice, making it so much easier to watch a Trump speech.

.@GreyDeLisle reading Trump tweets as Azula is both fantastic and terrifying. https://t.co/POTEuOtFQA

In the same vein as Mark Hamill’s Trumpster, voice actor Grey DeLisle-Griffin recently posted a series of videos to TikTok in which she read out Donald Trump’s post-election rants as her Avatar: the Last Airbender character, Azula, the cruel and unhinged princess of the Fire Nation who briefly took on the post of Fire Lord in the midst of a mental breakdown.

As her power was threatened by the invading forces of good, Azula grew ever more isolated and paranoid, firing everyone around her. Needless to say, Azula’s voice matched the tone of Trump’s tweets perfectly, but one cosplayer took it to the next level, recreating Azula’s descent into madness with the help of DeLisle-Griffin’s audio.

Another voice actor who has lent his talent to Donald Trump quotes is Billy West, who voiced roughly half the characters on Futurama. But no character is as suited to Trump’s voice as the pompous and oblivious space captain Zapp Brannigan.

Brannigan is an overweight and incompetent self-aggrandizing who hides his baldness beneath an absurd combover and his deep insecurity beneath a swaggering misogyny. Hearing West deliver Trump quotes with Brannigan’s signature lack of self-awareness is the most natural pairing in the world.

Once you’ve heard a few minutes of #MakeAmericaBrannigan quotes, you’ll start to listen for Kif Kroker’s exasperated sigh every time Trump opens his mouth. It’s also worth checking out West’s rendition of Trump’s doctor’s note in the voice of Zoidberg.

Sarah Cooper’s “How to” Trump Videos

Comedian Sarah Cooper is the genius behind the “How to” series of Trump videos and is undoubtedly the breakout star in the field of dramatizing Trump quotes. Lip-syncing to audio of Donald Trump in conversation with journalists, she acts out what he’s saying, and allows her facial expressions to capture the way that Donald Trump pulls everything he’s saying directly out of his ass.

It’s a simple concept, but Cooper is so good at it that it was recently turned into a comedy special for Netflix called Everything’s Fine. She turns Donald Trump’s rambling into an art form and makes it possible to listen to his voice without feeling nauseous.

So, as Donald Trump fights his inevitable removal from office, we can at least thank him for gifting us some comedy gold—while doing everything in his power to destroy our country.