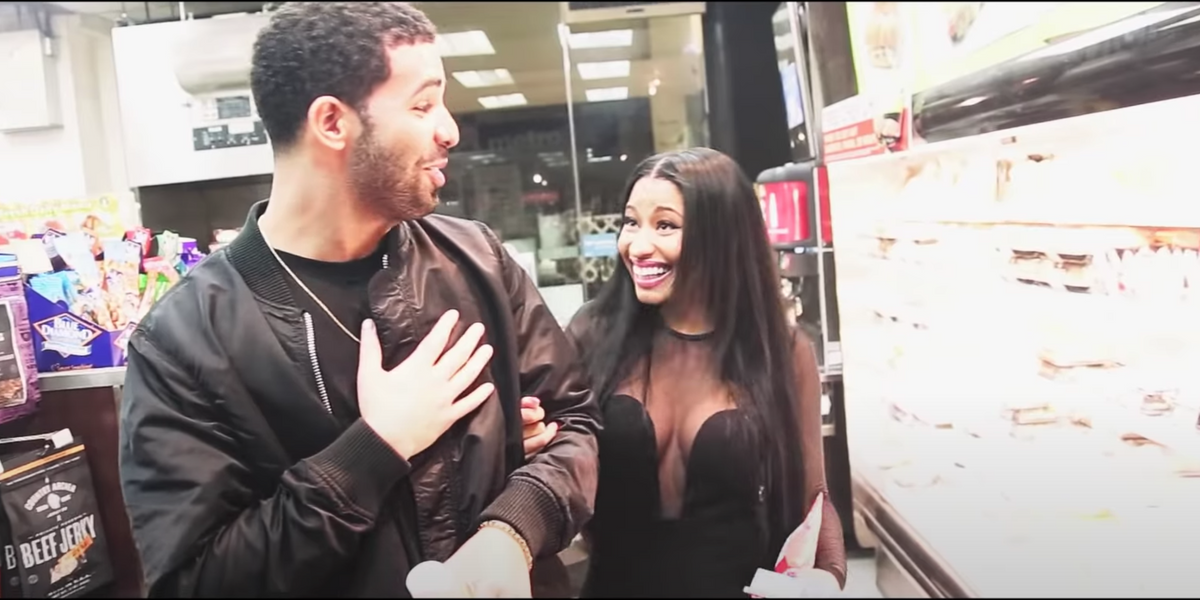 Has there ever been unrequited love as grueling as that between Drake and Nicki Minaj?

OK, sure, there definitely has been. But if you, like me, were a teenager in the early 2010s, not only were the two rappers the most important figures in Hip-Hop; their consistent flirting made for the biggest “will they, won’t they” plotline of the decade.

Drake, never one to be shy about expressing his vulnerability, often hinted at — or just explicitly admitted to — the longtime crush he had on Nicki as they shared a meteoric rise to fame. But of all their cute moments throughout the years, none stands out quite like the time the pair hit 7-Eleven together in 2014, in-between takes of Usher’s “She Came II Give It II U” music video.

Nicki & Drake BTS of Usher’s “She Came to Give It to You” Video www.youtube.com

As the duo stroll into the 7-Eleven, Drake assures Nicki he’ll buy her anything that strikes her fancy, like a very cool dad on a road trip pit stop. “Get whatever I want?!” Nicki asks gleefully, before naturally gravitating towards the Cheez-Its. Drake makes the shopping trip easy for her: “All you gotta do is point.”

Drake fully milks this 7-Eleven haul as an opportunity to spoil Nicki, patiently perusing the aisles with her as she calculates the most efficient way to cheat on her diet. “You want the Nutella dip sticks?” he lobbies her. “I’m splurging today!”

Later, with arms full of Cheetos, the aforementioned Cheez-Its, an unidentifiable Hostess product, some wrapped baked goods, and a bottle of iced tea, Drake heads to the counter to pay. “Thank you, baby,” Nicki coos. Drake responds, “I got you, baby — don’t even worry about it.”

The clip is brief at just over a minute, but that’s still long enough to give me lots to think about.

Here, we have Drake — Mr. Aubrey Graham, former Degrassi heartthrob and perhaps the original simp — using his pocket change to buy his crush snacks. It’s cute because it’s humanizing; while the average person may not be able to court the apple of their eye with elaborate sushi dinners and rides in their Mercedes, the average person could shell out a few bucks on a small collection of processed snack foods.

Drake and Nicki’s 7-Eleven trip is also endearing because it serves as a perfect example of what could’ve been: Dricki, the ultimate Hip-Hop couple that never officially happened. Dating rumors between the two began back in 2010, when Drake admitted his crush on her — there was even a time where the pair were believed to have tied the knot.

However, even after some cozy public appearances, a falling out, and that infamous lap dance in Nicki’s “Anaconda” video, Drake and Nicki never officially dated. And now that Mrs. Petty is married and with child and Mr. Graham has a son of his own, the Dricki ship has finally been put to rest. (Important segue question: Are their kids having playdates?!?)

Maybe it’s just my social distancing-induced hunger for nostalgia talking, but I really miss the 2014 era of pop culture. Or maybe I just miss being able to wander into my corner bodega without a mask.