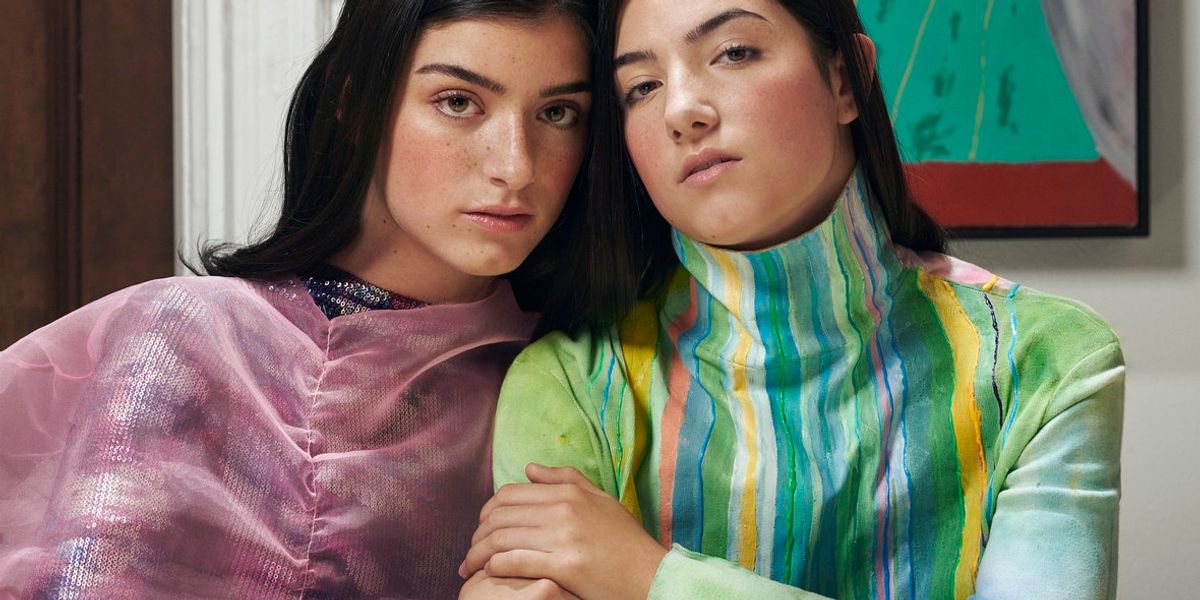 TikTok superstars Charli and Dixie D’Amelio have been “cancelled” online amidst accusations of entitled behavior.

The teenage sisters began to garner criticism after the release of a new YouTube video on their family channel, which they share with their dad Marc and mom Heidi, called “Our Mystery Guest | Dinner With The D’Amelios.”

The video depicts the D’Amelio family at their new home in Connecticut, awaiting a surprise dinner guest who will share the meal prepared for them by personal chef Aaron May, who has appeared on the Food Network and been inducted into the Arizona Culinary Hall of Fame as a “Chef Extraordinaire.”

The surprise guest turns out to be James Charles, a TikTok and YouTube star known for his makeup tutorials. As the dinner progresses, Marc, Heidi, and James all attempt to carry on meaningful conversations as the D’Amelio sisters squirm in their seats and otherwise appear fairly uninterested.

Chef May made paella for the family, explaining, “It’s classic paella, and it’s actually an omen of good luck and fortune.”

Soon after making a variety of disgusted faces as she picks apart the food with her fingers, Dixie tries one of the snails in the paella only to run outside and vomit. She comes back and says, “I threw up; that was not good.”

The rest of the family goes on as if nothing happened, with Heidi commenting, “That was a very dramatic scene.” Charli then asks if they have any “dino nuggets.”

“95 million not enough for you?” Charles asks jokingly. “Well I was just like saying like, even numbers,” Charli responds.


Our First Mystery Guest | Dinner With The D’Amelios

Now, TikTok users are flocking to both sisters’ posts to express their disappointment in what they see as the D’Amelio’s spoiled, ungracious behavior. As many as one million TikTok users have unfollowed Charli since the YouTube video went up.

In response, Dixie posted a TikTok Thursday morning saying, “Hey guys, if you are coming here to comment hate like this, maybe hold on one second and know the full story, I’m so grateful for all of the opportunities I’ve had, so I would never in any way want to be taken as disrespectful, especially from an out-of-context 15-second clip. So basically, my team knows I throw up a lot. I could throw up at the smell, the thought or the taste of anything. So, when they saw the snails, they were like, ‘Oh, let’s get her and try to see if we can get a reaction out of her.’

“I love Chef [May] and I would never disrespect him in any way and maybe don’t judge someone’s personality over a 15-second video.”


-video…anyways, not posting this for any other reason than to share the truth of something that was ridiculously blown out of proportion…

The girls’ father jumped in too, posting a video to his own TikTok, which boasts 8.3 million followers, to explain the situation. “So Dixie, sometimes when you eat food you don’t like you puke, and we know that because we are her parents and we’ve seen this happen time and time again,” Marc adds. “She is a little dramatic, though.”

On Thursday night, Charli went live on Instagram, in tears, wondering how long she would stay on TikTok, a platform she called “filled with hate.”

Regardless of how you feel about the ill-fated YouTube video that led to the D’Amelio family’s first real brush with cancel culture, it’s worth pointing out that the sisters’ behavior in the video was in no way uncharacteristic. If you watch enough of the content the D’Amelio’s post, especially the YouTube content that reveals more of their personalities than their short-form TikTok content, it quickly becomes clear that the girls are sullen, fidgety, distracted, silly, and relatively child-like.

One has to wonder if they would ever have become the social media stars they are now if it wasn’t for Charli’s talent for dancing that first gained her followers. Plus, that fame was quickly sustained and bolstered by the sister’s inevitable romantic entanglements with other TikTok personalities.

The D’Amelio sisters aren’t particularly charismatic, and for the most part they behave like what they are: teenagers. But perhaps that lack of charm and polish, which led Charli to speak truthfully about her aspirations for more followers, is actually what makes them so oddly appealing.

We’re all so used to influencers like James Charles, who, in the dinner clip, was articulate and polished as he described his career aspirations. He was prepared, smiling, engaged, and generally gave the sense of performing for an audience. Meanwhile, the two sisters made faces at each other, picked at their food, interrupted people, barely engaged with the conversation, made snarky comments about the food, slumped in their chairs, and, frankly, acted exactly like surly teenagers.

In a way, it’s refreshing. For all their surliness, the D’Amelio sisters acted like real teenagers at a real family dinner. So while you may feel like both girls were ungrateful and rude, you also have to admit that they gave us exactly what we want from influencers: a peak into their real lives.

Additionally, is it really fair to blame them for things that have become so normalized for them? As Dixie pointed out, the family has been working with the chef for awhile, so she’s comfortable with him and presumably they have a close enough relationship that she didn’t think he’d take offense at her reaction to his food.

Besides, if you’ve ever spent any significant time with a teenager, you know they do overly dramatic things like gag at the taste of an unfamiliar food. Just because you would never dream of going outside to vomit if a world class chef made you dinner doesn’t mean that isn’t a perfectly normal thing to do in the world that social media fame has created for Dixie.

In fact, we, the consumers of online content, are the ones who have created the strange world these young influencers live in. How can we blame them for adapting to that world?

As for Charli’s comments about her follower count, it’s worth noting that of course Charli’s follower count is important to her. It’s naive to act as if she’s just a teenager who happens to post TikToks for her millions of followers as she lives an otherwise normal, down-to-earth life. Social media is her job and many other jobs (from her videographer to her manager to her PR team) depend on her success.

If we want young influencers to act as if their social media presences don’t matter to them, then we shouldn’t raise them up on such high pedestals in the first place.

Summarily, if you had a problem with the way the D’Amelio girls behaved in their latest YouTube video, maybe you should think less about the manners of two children who have suddenly been thrust into the dangerously bright spotlight of social media fame, and think more about your role in the culture that put them there in the first place.