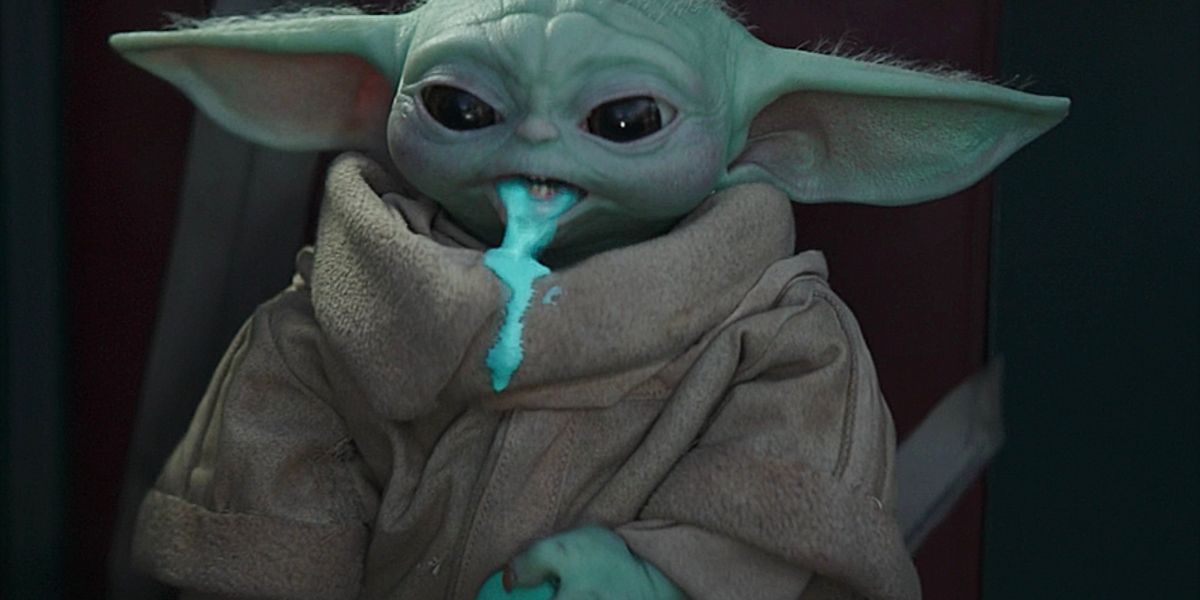 Before getting into spoilers, let’s discuss the episode’s set up. Din Djarin, the titular Mandalorian, and Baby Yoda are en route to the forest planet of Corvus to find Ahsoka Tano. Their ship remains badly damaged from the events of the previous two episodes, so they decide to take a detour for repairs. Okay, it’s spoiler time!

Well, we called it. In last week’s review we predicted Episode 4 would give us another side quest and the return of Cara Dune, now Marshall Cara Dune. Cara serves as local law enforcement on Nevarro alongside Magistrate Greef Karga (Carl Weathers). Carl Weathers, as Director of Chapter 12, made sure to give himself the best moments, including an adorable interaction with Baby Yoda when Din and “the Child” arrive on the planet.

Din finds Karga’s village on Nevarro completely transformed from what we saw in Season 1. The streets are full of hipsters, and there are even schools for droids to teach children about trade routes. Children love trade routes.

Karga agrees to repair the Razor Crest for free in return for Mando’s help on a mission. Our hero obliges, and Baby Yoda is left at the school for safety. It should be noted that although Baby Yoda is technically 50 years old, he is basically a toddler sitting in on a class for fourth graders. Plopping him in there with no context given to the instructor or classmates seems like child abandonment. Despite this, Baby Yoda is perfectly content after using the Force to steal blue macarons from a neighboring student.

Baby Yoda enjoys a snack on his first day of school

We then run into Mythrol (SNL‘s Horatio Sanz), who we last saw being frozen in carbonite by Mando in the series premiere. As it turns out, Mythrol is working off a 350 year debt by serving as Carl Weathers’s bitch. Unfortunately for him, that includes coming along for the gang’s deadly job of the week.

Karga and Dune fill in Mando on an Imperial base occupied just outside the safe zone on Nevarro. If they can annihilate the remaining troops there, Nevarro will be completely free and can become a “trade anchor for the entire sector.”

Initially their attack strategy is the typical “blow the reactor and get out of there” Star Wars plan, but as is becoming a running theme in this series, Karga has greatly underestimated Imperial presence. While exploring the base, however, things become very interesting.

Emperor Palpatine looking sexier than ever

The gang discovers what appears to be tanks full of failed Emperor Palpatine clones. Realizing they are trespassing on a heavily guarded laboratory, not a military base, they begin looking for clues. Mythrol engages the lab’s computers and pulls up a hologram transmission from Dr. Pershing (Omid Abtahi) to Moff Gideon. The doctor’s message reveals answers to the series’ biggest and widely debated mysteries.

Dr. Pershing first appeared in Season 1, working with the remnants of the Empire and hoping to conduct tests on Baby Yoda. Star Wars nerds like myself noticed the insignia on his jacket, which resembled that of Kamino, the planet used for cloning in Attack of the Clones.

This sparked debate in the Star Wars community:

Everything in “Chapter 12: The Siege” points to the third option: the Empire needs Baby Yoda’s blood to bring resurrect Palpatine.

Why this makes total sense:

The transmission ends with Dr. Pershing stating he needs access to Baby Yoda (“the donor”) again for more blood if “the experiments are to continue as requested.”

The remainder of the episode is basically an extended action sequence in which our heroes escape the lab and eliminate Imperial troops in pursuit. Mando’s ship is repaired, and the journey to Ahsoka Tano is back in business.

However, in the final moments, we get a major clue about where this series is heading and how it connects to Disney’s sequel trilogy.

Mando leaves Cara on Nevarro, where she is seen being all emo because a New Republic police officer reminded her that the Empire blew up her home planet and all her loved ones. The show then cuts to an Imperial ship with a space Nazi lady facetiming one of the people that repaired Mando’s ship.

“The device has been planted as you requested.”

“Good. You will be well-rewarded in the new era.”

The mention of a “new era” can only mean one thing: Long-standing rumors that The Mandalorian will explore the origins of The First Order and explain how the New Republic fell are true.

It’s well known that showrunners Jon Favreau and Dave Filoni are professionals at filling in the narrative blanks left by Star Wars films. Critics were displeased in 2015 when The Force Awakens hit theatres and it was clear that arguably the most interesting developments in the Star Wars universe since Return of the Jedi happened off screen. Now we are likely to get all of those answers and from much more capable hands.

And the verdict is…

PREDICTIONS FOR NEXT WEEK

With only three episodes left in the season, we are absolutely going to see Ahsoka Tano (Rosario Dawson) in Chapter 13. We know the Empire is now trailing Din and Baby Yoda, and we know they are heading right to her.

Dr. Pershing said that they were unlikely to encounter another specimen with as high of a Midi-chlorian count as Baby Yoda. Little did they know that Baby Yoda is about to lead them right to Ahsoka Tano, the former padawan of Anakin Skywalker, AKA Darth Vader, AKA a being born of the Force with the highest recorded Midi-chlorian count in the galaxy.

Moreover, Pershing noted that the clone bodies had “rejected” Baby Yoda’s blood. Perhaps that won’t be the case if they extract blood from a humanoid that doesn’t eat frogs, like Ahsoka.

Given Baby Yoda’s age, he was definitely alive during Order 66 (Revenge of the Sith). Perhaps Ahsoka knows Baby Yoda or the Jedi that hid him away during that time. At the very least she will recognize that he is one of Yoda’s species. Therefore, when the Empire shows up to snatch Baby Yoda, Ahsoka will fight them head on.

The totality of these events will surely span over multiple episodes, so screw it, here is our major prediction for the end of Season 2:

Ahsoka will successfully save Baby Yoda from the Empire, sacrificing her own life in the process. We know she is dead before the events of The Rise of Skywalker because she is heard speaking to Rey along with other fallen Jedi at the film’s climax. It would be complete sacrilege for the franchise to kill off such a beloved character off screen. So, as much as we’d hate to see Ahsoka perish, this is absolutely the most fitting way to execute it.

However, Ahsoka will not completely end the Empire, and in a cruel twist of fate, it will be her blood that is finally accepted by the host body (or “Strand-cast“) that resurrects Palpatine.

What do you think of our review of The Mandalorian Season 2, Episode 4 and our predictions for the rest of the season? Let us know on twitter, @Popdust.