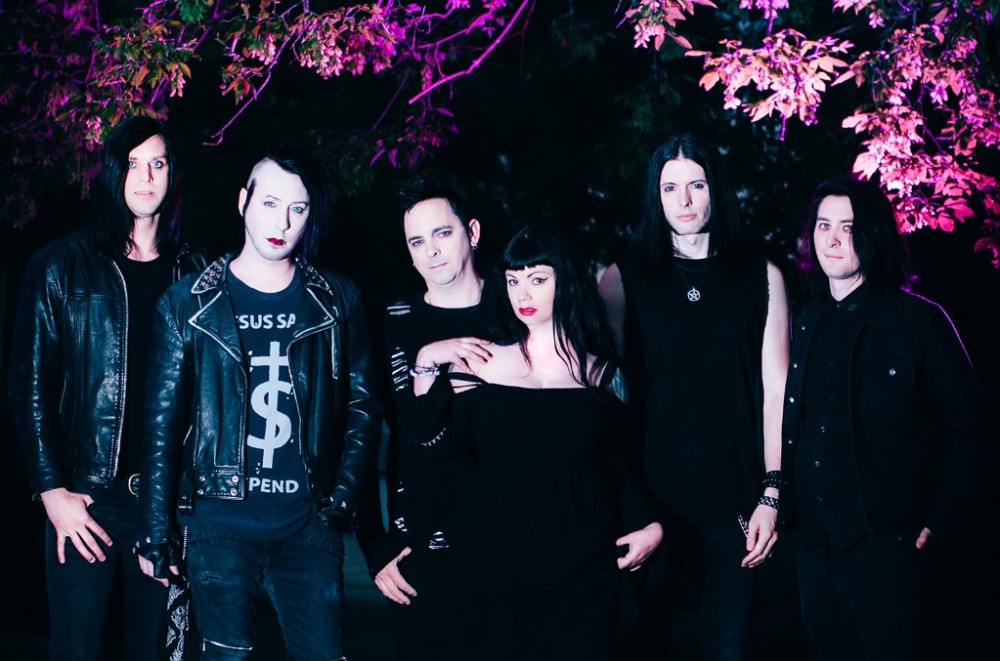 “It’s slowly turning into some strange Howard Hughes world where we’re using Kleenex boxes as shoes,” ponders Rainbow. “[But] life could be worse.”

No, The Birthday Massacre’s guitarist isn’t going stir crazy — not yet — under self-imposed isolation. Back home in Toronto following the postponement of the band’s U.S. tour supporting eighth album Diamonds (arriving today on Metropolis Records) due to the coronavirus pandemic, his city, like much of the world, is on lockdown. In Toronto, things are still winding down as opposed to gearing up again, he says, as more and more stores shut down day by day.

“The streets are pretty bare, and it’s almost like an Escape From New York/Kurt Russell kind of vibe,” says Rainbow. “It’s very quiet at night, which is a nice thing. I’m a night owl, so I like the peace. Touring, it’s loud all the time, so I really appreciate my quiet nocturnal time.”

With all being quieter on the Eastern Front, Rainbow is making the most of his time home — he’s even calling his parents. “It’s kind of nice in a way when you know everyone’s home,” he says. “It’s almost like this weird little virtual sleepover party for a few weeks where everyone is home in their PJs calling each other. It’s kind of cute in a way.”

The direness of the current times isn’t lost on him, though. “I’m trying not to focus too much on all of the news,” he confesses. “Otherwise, you get nothing done, and you’ll be climbing the walls.”

Therefore, Rainbow is using this time to connect with fans online, playing new tracks from Diamonds and experimenting with some covers, including an unnamed track from Jim Henson’s 1986 David Bowie-as-goblin-king fantasy drama Labyrinth that he admits may not see the light of day and Limahl’s “Neverending Story,” which recently experienced a resurgence due to season three of Netflix’s sci-fi series Stranger Things.

“We will eventually do the tour, but in the meantime, we’ll do live studio performances in an almost practice-like casual environment so people can hear the songs and get a little taste of what’s to come in a different context,” says Rainbow of the band’s planned streaming sets. “We’re really excited to see how it resonates with people and how they react to it. It’s fun watching from home. It’s like watching the crystal ball on your laptop screen.”

On Diamonds, the follow-up to 2017’s Under Your Spell, The Birthday Massacre enters a new, dark and dreamy portal. It projects something instinctively mystical and mysterious from atmospheric opener “Enter” to enigmatic and rhythmic “Flashback,” the dance-y title track and “The Last Goodbye,” and through the misty stargaze melody of “Mirrors” and delicate closer “Parallel World.”

It’s so easy to get lost in Diamonds’ shadowy landscape, it may just be the album for the times — a cohesive storybook of nine tracks seeped in reverie. “There is a little bit of escapism,” observes Rainbow. “It’s the same as escaping into a good movie or a book.”

After 20 years, The Birthday Massacre — which also includes vocalist Chibi, lead guitarist Falcore, bassist Nate Manor, keyboardist Owen and drummer Rhim — still retain some of the mystery surrounding their lyrics, but Rainbow admits Diamonds is a more personal album for the band. Rarely conceptualizing or overthinking their music, they leave the songs up for interpretation to prevent from painting themselves into any corners.

“Part of what we find fun about writing is being more dreamlike and surreal in our approach,” says Rainbow. “It’s more of having the right mixture and balance of different elements and vibes within the songs — musically or texturally with the sound or the words we use. It’s more of an artistic approach and less ‘This is what the song’s about.’ ”

Lyrically, they purposefully write in a fragmented way. “We tend to mix our personal experience with mythology and pop culture references, and write in a way that sort of tells a bit of a visual story but nothing too linear,” explains Rainbow. “We like our paradoxes and our metaphors and our color. There’s this Birthday Massacre speak that we’ve developed. If I explain what the music is about, it kind of blows the secret. It’s like we’re almost writing in code.”

Working on Diamonds for a year gave them time to play around with textures and melodies, and bring in collaborators, including former TBM bassist O.E., who contributed vocal melodies and lyrics on several tracks; A Primitive Evolution’s Brett Carruthers; and Fake Shark’s Kevin James Maher. Amir Derakh and Ryan Shuck of Julien-K, which was to join The Birthday Massacre on the tour, also collaborated on Diamonds. In Los Angeles, the band had started experimenting with the music at Shuck’s place, and Derakh ended up recording the solo on “Flashback.”

“There was a particular sound of his that we liked, and we thought it would lend itself really well to that song,” says Rainbow, who hopes both bands can eventually tour as originally planned. “It was cool to see how he worked that part out, cutting up different parts of solo ideas, stitching it together and then replaying it all. Then we had a dilemma: ‘Who’s going to play it live?’ ”

The problem was inadvertently solved when the coronavirus halted everything. Fall is the predicted time frame for rescheduling the tour, although Rainbow says, “It’s hard to even schedule dates right now, so we’re just getting word out. Slowly, it’s trickling in. Everything is kind of ground to a halt at the moment, but the world has to keep turning.”

The Birthday Massacre’s own world originated as an entity that its members created to celebrate their common interests within a band. Rainbow finds it mind-blowing that it has been more than 20 years since TBM formed 1999 and debuted with 2002’s Nothing and Nowhere. It seems like a lifetime ago — and it is. Along the way, The Birthday Massacre has charted four titles on the Billboard 200, as well as selling 243,000 equivalent album units and garnering 60.7 million U.S. streams, according to Nielsen Music/MRC Data.

“It’s insane because it all started out with no real sort of agenda or plan [for us] to do this for any length of time,” he says. “It was just something we did among friends to kill time, and it was something that allowed us to put all our creative interests under one umbrella. To think that it has been so many years at this point, it’s pretty crazy.”

Despite the chaos in the outside world, everything is in place for The Birthday Massacre and everything feels natural, he says. “If we were a storybook, this is just our next chapter. The band and the albums grow just like we grow and change throughout our lives. It just reflects where we’re at personally and creatively at this point.”