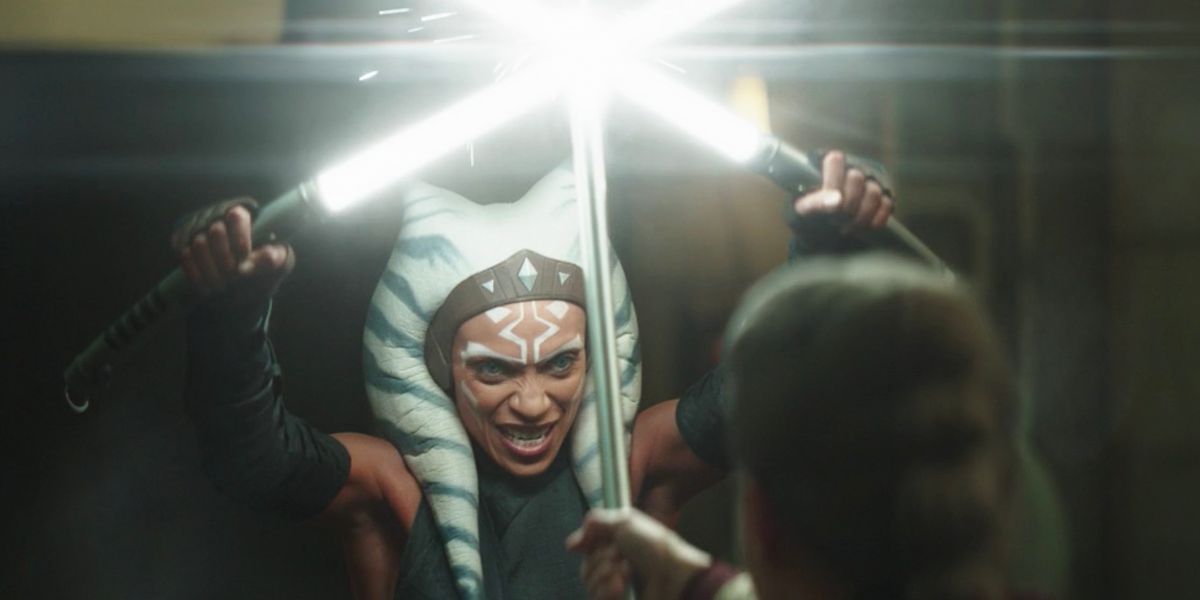 “Chapter 13: The Jedi,” written and directed by Dave Filoni is quite possibly the show’s strongest entry to date. We learn the true origins and name of Baby Yoda and get the first appearance of lightsabers in the series. You already know from the headline that Ahsoka Tano (Rosario Dawson) is finally revealed in the episode, but be warned that this review of Season 2, Episode 5 is packed full of spoilers. Do yourself a favor, watch the episode, and come back!

Spoilers ahead for “The Mandalorian” Season 2, Episode 5
assets.rebelmouse.io

First, we need to address the major plot leaks about this episode we reported earlier this week. Aside from the runtime (originally reported to be 58 minutes) everything was spot on:

Despite having known so much about the episode ahead of time, “Chapter 13” was more than worth the watch. The opening sequence gave us the first appearance of lightsabers in the series and the action is phenomenal. I’ll go a step further and say that all the fight scenes in the episode are brilliantly choreographed and shot, easily rivaling those of the recent Star Wars films.

Ahsoka wields her iconic dual white lightsabers and her character design is flawless, from the texture of her skin to her bright blue eyes. The scenes with her communing with Baby Yoda (or Grogu, rather) are quiet and still, carrying immense gravity as we know so much of the series had been leading to this moment.

“Grogu and I can feel each other’s thoughts,” Ahsoka tells Din when he asks if she can understand Baby Yoda.

She recognizes Grogu as being from the same “kind” as Master Yoda, and Yoda’s musical theme plays briefly when she mentions his name. CHILLS!

Din hopes Ahsoka can explain Grogu’s “powers” but instead she briefly describes the Force more articulately than we’ve heard in quite a while from Star Wars:

“The Force is what gives him his powers. It is an energy field, created by all living things. To wield it takes a great deal of training and discipline.”

To Mando’s dismay, Ahsoka refuses to train Grogu. She tells Din that Grogu has formed a great attachment to him and sees him as a father. If she were to separate them, that attachment could lead Grogu to the darkside, much as it did to her former master, Anakin Skywalker.

While Ahsoka does not mention Anakin by name, we do believe there is a deeper connection between him and Grogu that has yet to be revealed. Interestingly, Grogu is the same age as Anakin Skywalker, and only five years older than Ahsoka herself, meaning it is possible all three of them were training on Coruscant around the same time.

Magistrate Morgan in her Japanese Garden on Corvus

Aside from all the Grogu/Baby Yoda lore, which is arguable the crux of this episode, we learn what Ahsoka has been up to on Corvus. Described by Bo-Katan as a “forest planet” many fans may have expected to see something like Endor. Instead we are treated to a planet that resembles a samurai film adaptation of Sleepy Hollow more than a lush garden of Eden for Ewoks.

We learn that the city of Calodan is under siege by the tyrannical ‘Magistrate’ Morgan Elsbeth (Diana Lee Inosanto) and her private army. Elsbeth has long been affiliated with Empire, having ravaged worlds across the galaxy for resources that made her rich and helped build the Imperial fleet.

It first seems Ahsoka simply wants to liberate the people of Calodan, some of whom have been strung up in standing torture devicess in the town square. However, she is actually searching for the location of Elsbeth’s master, Grand Admiral Thrawn.

Elsbeth is a skilled warrior herself and wields a spear of pure beskar, the same metal used for Mandalorian armor which is also the only known material in the Star Wars universe that can withstand the strike of a lightsaber, with the exception of another lightsaber.

Ahsoka briefly agrees to train Grogu if Mando can help her infiltrate Elbeth’s fortress and liberate the village. The two return to the town for the episode’s climax and lay waste to almost every soldier and droid in Elbeth’s private militia. Eventually it comes to a standoff: on one side of Elbeth’s fortress gate is Mando and her top henchman, on the other is Ahsoka and the Magistrate herself.

Interesting side note: the unnamed henchman here is played by Michael Biehn, an 80s action movie star. Biehn is best known for playing Sgt. Kyle Reese in Terminator (1984), and Dwayne Hicks in Aliens (1986). Those roles have no bearing on this Episode, but it’s great that the series continues to recruit unexpected actors in supported roles, and it’s great to see him back on screen!

Morgan Elsbeth, having survived the massacre of her people in the Clone Wars, is a well-trained warrior in her own right. Using her beskar spear, she is actually able to hold her own against Ahsoka in battle. However, the confrontation is short lived, and while Elsbeth’s death happens offscreen, we can safely assume Ahsoka learned the information about Thrawn’s whereabouts before decapitating her.


And the verdict is…

While many might be underwhelmed with Baby Yoda’s name being Grogu, we all know he will forever be known as Baby Yoda. The important thing is that so much of his backstory was finally confirmed. Rosario Dawson was as perfect as Ahsoka as we all expected and we cannot wait to see more of her in this role.

“Chapter 13” ends with Ahsoka once again refusing to train Grogu, despite Din having held up his end of the bargain.

She suggests instead that Mando bring Grogu to the planet Tython.

“There you will find the ancient ruins of a temple that has a strong connection to the Force. Place Grogu on the seeing stone at the top of the mountain. Then Grogu may choose his path. If he reaches out through the Force, there’s a chance a Jedi may sense his presence and come searching for him.”

We can assume from this that Mando’s next stop will be Tython. However, we also know he and Grogu are being trailed by the Empire and that show likes to pad out the show with “side quest” episodes in between main missions. Chances are that next week will find our heroes on their way to that old Jedi temple when they are confronted by Moff Gideon, or perhaps even Boba Fett.

Mace Windu to return in “The Mandalorian?”

As for the rest of the season, and which Jedi Grogu might reach through the Force at that temple, there are rumors floating around regarding a Mace Windu spinoff coming. The other obvious candidate would be Luke Skywalker, but any appearance of Luke is likely to be saved for future seasons.

There are also rumors of an Ahsoka Tano spinoff in the future, which I’m personally more excited about because Rosario Dawson is so darn good as Ahsoka.