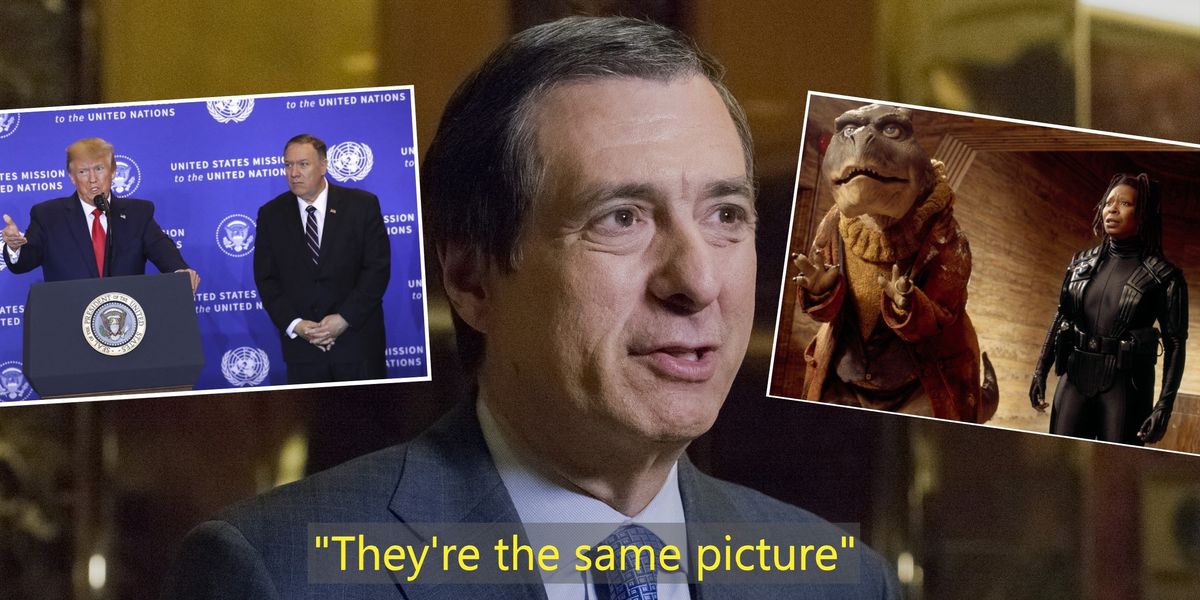 On Wednesday morning, Fox News host Howard Kurtz took to Twitter to let the world know that both sides are bad in the most hilarious attempt at false equivalency in modern memory.

Host of the Fox News show Media Buzz, Kurtz recognizes the dangerous game the Trump administration is playing. By blocking President-Elect Joe Biden and his team from transitional access to the workings of the federal government, they are threatening the stability of America’s institutions.

A smooth transition of power is essential. And people like Secretary of State Mike Pompeo and General Services Administrator Emily W. Murphy are flouting that important process.


Sec. of State Mike Pompeo: ‘There will be a smooth transition to a second Trump administration’

In order to prop up Donald Trump’s continued denial of the fact that he lost the election, they are refusing access to Biden’s team. Pompeo even mocked a reporter’s question on the issue in a press conference on Tuesday, remarking that there would be “a smooth transition to a second Trump administration.”

In case there is any uncertainty, it should be noted that Joe Biden unequivocally won the election, and the only way to achieve a “second Trump administration” would be through a coup.

But Kurtz knows that this issue—like every issue in American politics—cannot possibly be one-sided. That’s why he identified the major culprit on the other side of the aisle: Sister Act star Whoopi Goldberg.

One of the hosts of ABC’s daytime talk show The View, Goldberg had a message on Monday for any of Donald Trump’s supporters who are still in denial about the election’s clear outcome. Addressing the camera directly, the comedian and actor told them to “suck it up.”

Of course many Trump supporters would no doubt take issue with the idea that a three-year investigation into electoral misconduct—resulting in dozens of indictments and guilty pleas, including several figures from within the Trump campaign—was “sucking it up.”

But Whoopi left room for them to pursue the same approach with Biden, saying, “If the law says it’s something to look at, look at it.” It’s just that first they have to acknowledge the reality of the election results.

They have to stop clinging to phony claims of fraud and stories about election observers being excluded. They have to accept the election results and admit that Joe Biden and Kamala Harris won.

Still, Howard Kurtz felt that Goldberg—the woman who allowed Patrick Swayze to possess her so he could dance with Demi Moore in Ghost—had overstepped the bounds of her sacred duty. Pushing voters to accept the outcome of a democratic election is apparently out of line.

And who has a responsibility to remain politically impartial more so than the star of 1995’s classic Theodore Rex—a movie about a dinosaur who is also a cop?

It was Howard Kurtz’s own tweet promoting a column he wrote on “both sides” of the election dispute that highlighted the supposed parallel between Whoopi Goldberg and top Trump administration officials. But when “Whoopi Goldberg” became a trending topic on Twitter—with users mocking his comparison—Kurtz pushed back, saying in another tweet, “Gee, I’d really prefer people react to the whole column about anger and payback on both sides.”

ah yes, the famous two sides, “the president of the United States” and “Whoopi Goldberg” https://t.co/DiQoOoz6OW

Leaving aside the fact that he chose those ridiculous examples to put in his original tweet, reading the full column doesn’t make it much better.

Kurtz draws absurdly stretched comparisons throughout. He likens comments from a former Obama and DNC spokesperson to the actions of two sitting senators.

The former spokesperson, Hari Sevugan, recently called for Trump staffers to be held accountable for assisting in an attempted coup—for employers to shun them. On the other side, the two sitting senators from Georgia have called for the resignation of Georgia’s secretary of state just for acknowledging that Joe Biden won the state through legal votes.

Never mind the strangeness of placing a man who no longer speaks for any political institution on the level of two of the nation’s top legislators. While it’s worth noting that they’re obviously in different leagues, the reality is that they aren’t even playing the same game.

Because Senators Perdue and Loeffler—who both face contentious run-off elections in January—weren’t weren’t criticizing the other side. They were attacking a fellow Republican simply for not supporting the president’s delusional belief that he somehow won an election he clearly lost.

Kurtz’s only other example of a Left-wing attack is a political commentator who hasn’t been on MSNBC since 2015. Touré wished ill on Trump supporters for voting “against America and for a cult leader who has no redeeming or admirable qualities.”

As for the Right-wing, Kurtz points to Attorney General Bill Barr, who has taken the unprecedented step of involving the Justice Department in what is technically an ongoing election. Before a winner is officially certified, Barr has approved investigators to pursue claims of election fraud.

There is, of course, no reason not to be vigilant in these matters. Investigators should pursue any legitimate allegation in an unbiased manner.

But at the moment there are no legitimate allegations—just a series of flimsy excuses. And Barr has spent his entire tenure as AG making it clear that his Justice Department is anything but unbiased. He works directly for Donald Trump. Which is presumably why Barr’s latest move prompted the department’s election crimes chief to resign this week.

With Bill Barr’s newly issued ‘Election Interference’ memo, apparent we have a second Barr policy to add to the OLC… https://t.co/7ZcqQqsPBH

So, no, there is no “both sides” in the election dispute. Joe Biden won the election, and Donald Trump is using his power and his supplicating cronies in an effort to undermine the democratic result.

On the Left, media figures of varying stature are being rude and pushing Trump supporters to accept reality. On the Right, people with real power are supporting an attempted coup that strikes at the heart of American democracy–and attacking those who don’t as apostates.

As is so often the case with efforts to find blame on “both sides,” Kurtz is trying to provide cover for Republicans’ blatant misconduct by dredging up petty gripes with the Democrats.

The reality is: Democrats and Republicans are not equivalent. In terms of corruption, deceptive rhetoric, and blind party loyalty, the Democrats are horribly outmatched. Kurtz’s pathetic attempt to make it seem otherwise only serves to make that more clear.