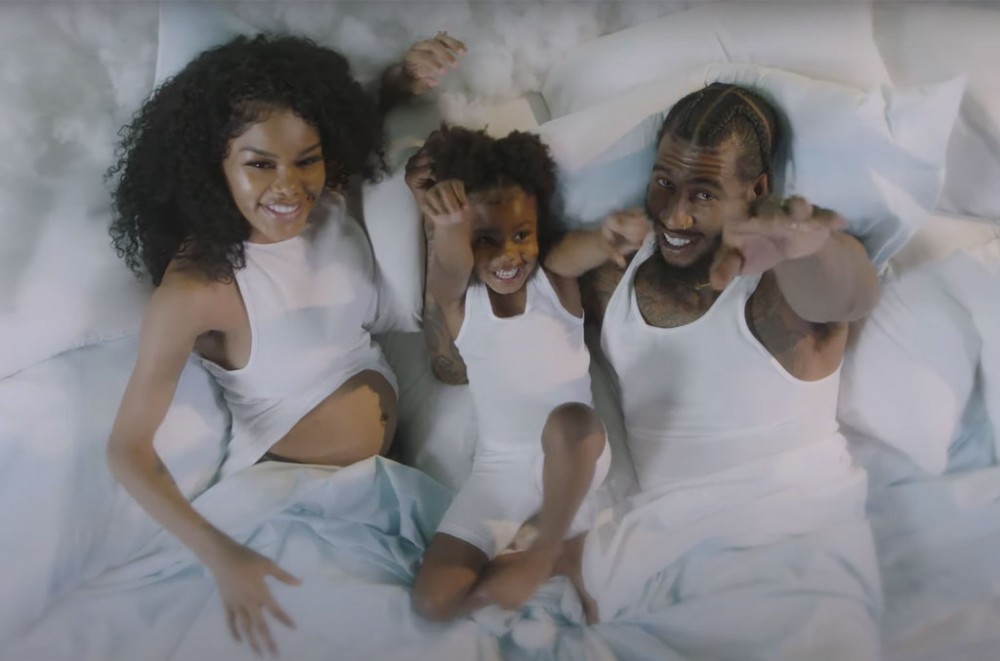 Teyana Taylor gave fans quite the wake-up call Friday (June 12) when she showed off her baby bump in the romantic “Wake Up Love” visual featuring her husband Iman Shupert.

As the two nestle together in bed surrounded by clouds, the couple — who have been married since 2016 — reveals there’s no trouble in paradise. In her signature sultry lyrics, Taylor beckons her beloved and calls him to please her in the morning, something the sheets or herself won’t accomplish.

The professional NBA player, who received a mononymous credit as IMAN, doubles as a guest artist in the track as well as her on-screen/off-screen love interest. In his verse, he raps about whatever bumps in the road they encounter throughout their relationship, their undying affection for one another serves as a guiding light. The only bump ahead belongs to Taylor when she lets their four-year-old daughter Iman Tayla “Junie” Shumpert Jr. hug and kiss her mom’s baby bump.

Around the 3:00-minute mark, Junie pushes her father’s hand away so she can cradle Taylor’s stomach all by herself, a touching moment the 29-year-old actress/singer/model says happens all too often at home.

“What she did at the end of the video is Junie the whole time,” Taylor told People. “She hogs the whole baby all the time. We were in the bed and loving on one another, and she jumped on the both of us like, ‘I’m here!’ It’s the cutest thing.”

“Wake Up Love” follows “Bare Wit Me,” “Made It,” “We Got Love” featuring Lauryn Hill and “How You Want It?” featuring King Combs as the singles on her upcoming studio LP The Album, which is due sometime this month according to her Instagram.

Watch Taylor and Shupert’s growing family in her “Wake Up Love” music video below.