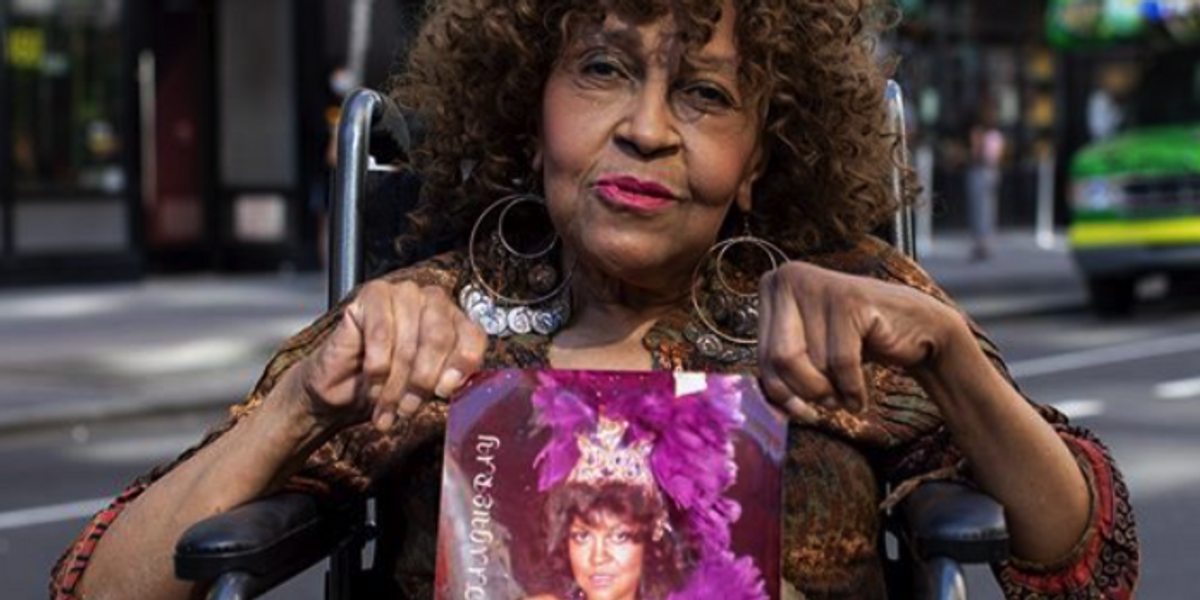 During the past few months of quarantine, my days and weeks have blended into each other, turning into an almost indistinguishable spiral that I’m partly convinced is a time warp.

But this week felt different for one reason alone: Each day when I checked Facebook, a new chapter of Tanqueray’s story appeared.

People familiar with Humans of New York might remember Tanqueray from a post that appeared last November. Dressed in a glorious faux fur coat and hat, the elderly woman charmed and awed HONY audiences with stories of her life and times as one of New York’s most notorious burlesque dancers.

Flash forward almost a year, and Tanqueray—whose real name is Stephanie Johnson—has re-emerged to tell more stories of her fascinating life. In a post, the man behind HONY, Brandon Stanton, informed audiences that he and Stephanie had continued to talk after that first interview, and she eventually told him her entire life story. They had initially wanted to record a podcast, but since Stephanie’s health had taken a turn for the worse, he had decided to share her story in 32 installments, which would each be posted on the HONY platform.

Each story would be accompanied by a link to the Tanqueray Trust, a fund collecting donations to support Stephanie through her many health issues. To date, the fund has raised $2.5 million.

Together, her posts form a poignant story about old New York City, about grit and resilience, and about drugs and dancers. They also tell a complex narrative about identity and performance.

Born in Albany, Stephanie grew up with an abusive mother. She attended an all-white school where she was “the fly in a bucket of buttermilk,” and every night she fantasized about running away. As a teenager, she got pregnant and moved to New York City to be with her lover, only to discover that he was married. Determined to move to New York, she broke into her mother’s home to grab her things—and her mother called the cops. 18-year-old Tanqueray was sent to prison.

“I’d always been good at art, so on the side I started making marriage certificates for all the lesbians,” she said. “I’d use crayons to draw little hearts and stuff. Then I’d sign it at the bottom to make it look official. In return they’d give me cigarettes, which was money. Pretty soon I had a little reputation.” Tanqueray’s story is full of details like this, little anecdotes that feel hugely theatrical when she tells them.

After leaving prison, she moved to New York and started going to clubs and bars, where she befriended members of the mob and started doing various odd jobs. Eventually she worked her way up to working as a go-go dancer. Her story only gets wilder from there—there’s a broken romance and several dear friends and a lot of joy and sorrow. Through it all, she never did drugs and never smoked a cigarette, though she danced for hundreds of cops and mafia members during their wild parties and worked her way up to become one of the city’s most infamous dancers.

It’s clear that Stephanie was a truly talented performer, and the way she talks about dancing is one of the more magical aspects of her story. She worked to give the men who came to see her “something to make them smile for a second,” as she says. “Something to make them feel like they’d gotten to know me. Then they’d pay their twenty bucks, and go sit in the dark, and wait for the show to start…And they’d wait for the lights to come up. Wait for Tanqueray to step out on stage and take it all away for eighteen minutes. Eighteen minutes. That’s how long you’ve got to hold ’em. For eighteen minutes you’ve got to make them forget that they’re getting older. And that they aren’t where they want to be in life. And that it’s probably too late to do much about it. It’s only eighteen minutes. Not long at all. But there’s a way to make it seem like forever.”

As the story goes on, it gets darker. Stephanie tells us that Tanqueray, the person who could transport people out of their lives, was always a bright facade. “Underneath all the laughs and the gags, it was always about one thing: survival,” she says. “Tanqueray was a lot of fun. But Tanqueray was Stephanie. And Stephanie was a teenage runaway from Albany.”

For all her life, Stephanie only knew a few people who loved her for who she was, not the image she projected. “Tanqueray is not who I am and never has been,” she said. “I’m a private person. I have no close girlfriends. Most of my friends, like the gay kids who did the balls in Harlem, they were real friends. All those kids are dead now.”

Her stories are full of exuberance, but underneath is a sense of deep loss. New York, she says, is no longer a place where people without families can escape in order to find their chosen families.

With each post, Stephanie’s GoFundMe fundraiser skyrocketed like dollars accumulating on a strip club stage. For her part, Stephanie has promised to donate all the funds not used for her own care to the Association to Benefit Children, a charity for kids in New York. She’s also promised that she won’t change her lifestyle at all—she doesn’t even plan on using the money to buy a car—though she likes the newfound attention she receives from some passersby.

In a way, Stephanie’s story has provided me (and many viewers) with a kind of burlesque performance, a window into an old city, an old world, and a truly marvelous soul whose story might never otherwise have been told. Humans of New York also works as a kind of sideshow of stories, many of them traumatic and shocking, most providing some cathartic revelation or hint of hope.

Are they exploitative or redemptive, or both? In the end, perhaps those of us who do follow HONY aren’t sure, but we keep returning to it perhaps because it makes us feel connected to strangers we don’t know, just like those men sitting in that strip club, finding infinity in moments of eye contact with people like Tanqueray.

Her story is a testament to the way that stories can bring us out of ourselves, even for the expanse of 18 minutes (or 32 Facebook posts). Is any it really her, or just a flashy projection of her, projected through one ambitious photographer’s lens? Are any of us authentically ourselves, or are we all constantly performing versions of ourselves in order to find love and safety, burying our pasts away? Will New York ever be like it was, a place where people could leave the past behind and start again? There are no clear answers to these questions. But at least we have the stories.

I’ve lost hours engulfed in the story of #Tanqueray on #humansofNewyork. What a life?!?!?! I love a good read AAANN… https://t.co/Eex1YUkul6

The story about Stephanie (Tanqueray) on HONY is the best story I’ve ever heard. I hope I live half as much life as… https://t.co/TyS82oqgw4