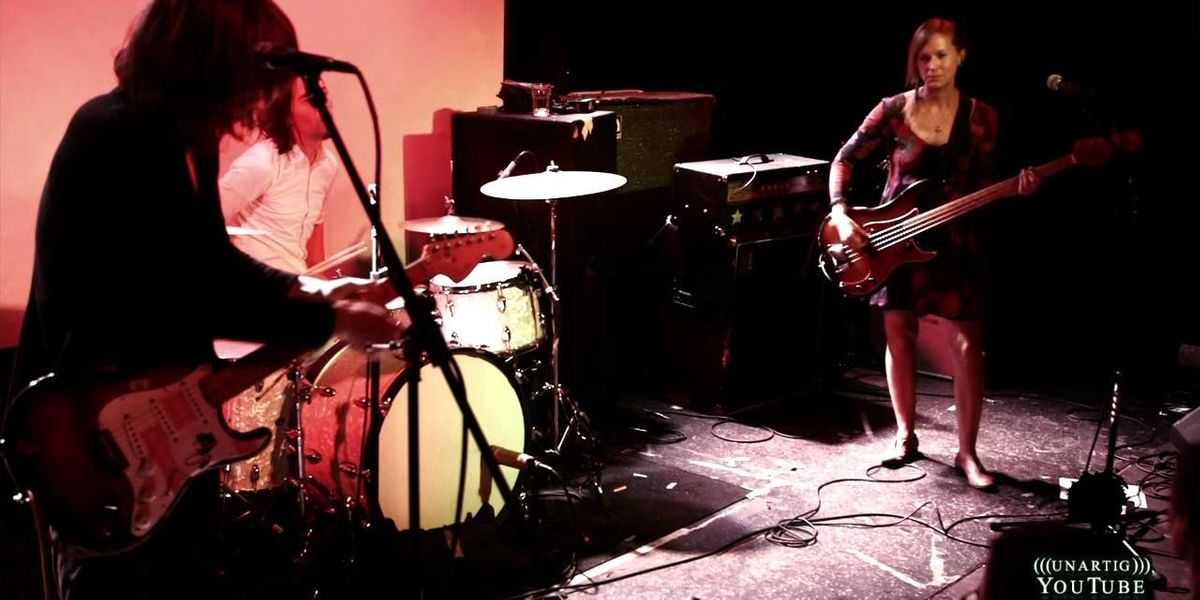 When you think of emo music, there’s a good chance the first bands that come to mind are entirely male.

“Emo” emerged in the mid-1980s from Washington, D.C.’s post-hardcore scene with groups like Embrace and Rites of Spring. By the early ’90s, the subgenre had shifted more towards indie rock and pop-punk, thanks to bands like Weezer and Jimmy Eat World. Emo as we know it today is often credited to groups like American Football, Cap’n Jazz, and the Promise Ring, who all released highly influential albums in the 1990s.

But despite countless revivals of the emo subgenre, women are left out of the conversation far too often. As is the case with metal, female-fronted bands who have played a critical role in the evolution of emo. Below, we’ve rounded up our favorite underappreciated female-fronted emo bands, spanning from the ’90s to today.

Taking their name from German poet Rainer Maria Rilke, the trio was formed by singer and bassist Caithlin De Marrais, guitarist and singer Kaia Fischer, and drummer William Kuehn, making them perhaps the most prominent female-led band of emo’s second wave. It’s easy to hear the legacy of Rainer Maria in today’s leading ladies of rock like Lindsey Jordan of Snail Mail, Mitski circa Bury Me at Makeout Creek, and even Paramore. After about a decade split, the band made an unlikely reunion in 2017.

During her senior year of high school in 2005, Frances Quinlan released an album—aptly titled Senior Year—under the moniker Hop Along, Queen Ansleis. By 2009, she had shortened the band name to just Hop Along and recruited a full band. The new members included Joe Reinhart of Algernon Cadwallader, a fellow Philadelphia band that helped ring in the emo revival movement of the late 2000s.

Before Michelle Zauner rose to indie prominence with her dream-pop band Japanese Breakfast, she sang in an emo/noise rock band called Little Big League. Those familiar with Zauner’s current project will recognize her knack for swirling, dreamy instrumentation in the music of Little Big League, whose two albums—2013’s These Are Good People and 2014’s Tropical Jinx—remain seriously overlooked.

Driven by zig-zagging, entwined guitars and puttering drums, the sound of Little Big League fuse the pensive subject matter of typical emo (“I am more than a bundle of pain receptors,” Zauner sings on “Year of the Sunhouse”) with the more upbeat instrumentation of Pacific Northwest indie heroes.

Named after a Smiths song (which was named after a Jack Kerouac quote), Seattle’s Pretty Girls Make Graves toed the line between emo and raucous post-punk, noted for their muscular guitar riffs and foolproof songcraft. Singer Andrea Zollo’s voice cuts like a knife, drawing comparisons to Corin Tucker of Sleater-Kinney, though their frenetic, often mathematical approach is more in line with emo experimentalists like the Dismemberment Plan.

Pretty Girls Make Grace signed to renowned indie label Matador Records in 2003, where they’d release their second and third albums. They called it quits in 2007 after the departure of drummer Nick Dewitt. To this day, despite acclaim from outlets like Pitchfork and Alternative Press, as well as a slot on Coachella’s 2004 lineup, Pretty Girls Make Graves still feel like a well-kept secret.

Combining the gritty plaintiveness of groups like Rainer Maria with the jangly pop appeal of ’90s singers like Liz Phair and Juliana Hatfield, Australian trio Camp Cope are one of the most beloved all-female emo bands right now. On both their scrappy self-titled debut and their sophomore album How to Socialise and Make Friends, singer Georgia Maq’s distinct howl covers topics like music industry jerks, sexual assault, and even United States conservatives, often veiled in brilliant deadpan humor: “‘The only thing that stops a bad man with a gun is a good man with a gun’ / The lies they use to control you,” she sings on a track hilariously titled “Jet Fuel Can’t Melt Steel Beams.”

American Football are probably the first band you think of to come from Illinois’ Champaign-Urbana metropolitan area. But just a few years before them, a band called Sarge was formed in Champaign by singer Elizabeth Elmore and bassist Rachel Switzky; they recruited a full band and released their debut album, Charcoal, in 1996. Their buoyant sound is more in line with the pop-punk of groups like the Promise Ring than the minimalism of their aforementioned fellow Illinoisans.

Elmore’s sugary soprano is a welcome juxtaposition against the furious strumming and drumming that composes your standard Sarge songs, with sticky hooks throughout. They received almost universally positive acclaim from local outlets like the Chicago Tribune, though their albums still feel like hidden gems to emo fans in 2020. Sarge broke up in 2000 when Elmore decided to pursue law school.