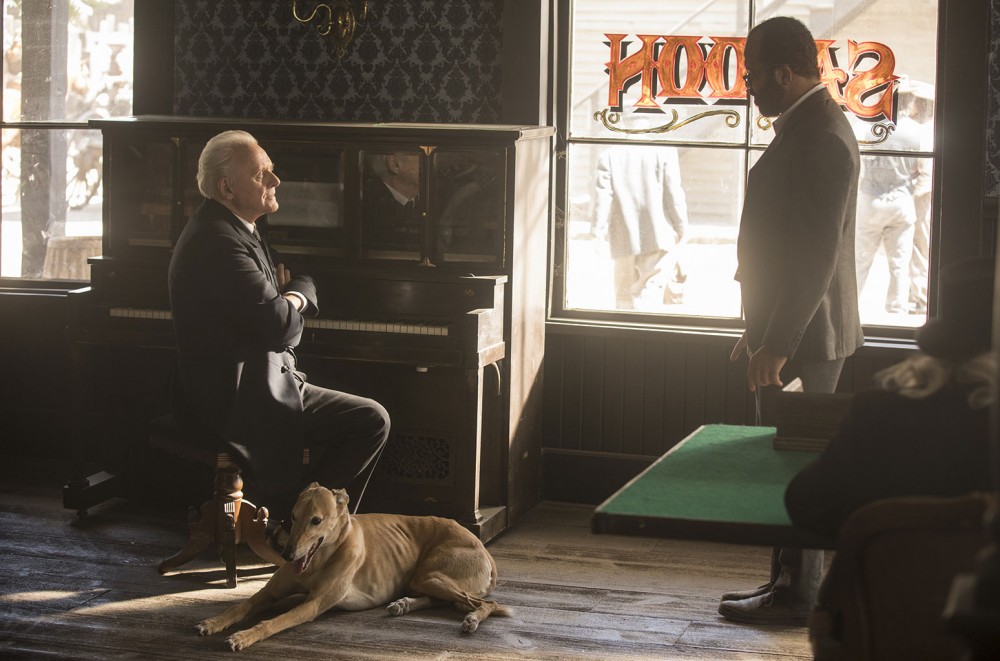 Since Westworld premiered in 2016, the HBO thriller about a dystopian pleasure world filled with androids has repeatedly surprised viewers with haunting, chill-inducing takes of modern songs reimagined as piano tunes or orchestral soundtracks. The new versions work so well thanks to composer Ramin Djawadi, who has won two Emmys for his work on Game of Thrones, and has also been nominated for his Westworld compositions.

“It's been incredibly fun doing those arrangements on the piano in the saloon,” the musician told Billboard in season one about his creative reinterpretations of songs in a dusty player piano style. “It's a little thing in the background that you might pick up on and then you think, 'Hey, wait, that doesn't belong there!' It makes it contemporary and fun.”

He added: “You're using these existing songs to create a level of comfort and repetition.”

Check out all the ways the critically acclaimed sci-fi show has incorporated modern music into its episodes below.

(Warning: If you’re not caught up on the show, there will be spoilers ahead.)

The Seattle band’s hit 1994 song was the first modern tune to get the Westworld treatment from the player piano in the saloon and brothel overseen by madam Maeve Millay (Thandie Newton). ”I loved Ramin Djawadi’s interpretation of 'Black Hole Sun,’” Soundgarden's late frontman Chris Cornell told Billboard in 2016. "It perfectly fits the mood of the scene, and reveals a duality that has always existed in the song.”

"Paint It Black," The Rolling Stones

This haunting take on the tune set the tone for Hector and Co.’s introduction and resulting fight scene. “With ‘Paint It Black,’ you think, ‘Oh, that’s when Hector comes to town and there’s that big shootout,’” Djawadi told Pitchfork in 2016 of how the 1966 song evokes memories of specific scenes.

This was just the first of several orchestral takes of Radiohead’s songs for the HBO drama, appearing as Maeve’s technical glitches started appearing. “The opening arpeggiated riff from 'No Surprises' translates really well into piano,” Djawadi told Vulture of using the 1998 song from the band of admittedly paraoid androids.

The song from the English goth godheads plays in the saloon as Maeve chats with Clementine Pennyfeather (Angela Sarafyan) and starts to remember terrifying scenes whose significance she's not fully yet aware of.

Episode 5: "Contrapasso"
"Something I Can Never Have," Nine Inch Nails, as covered by Vitamin String Quartet

This episode kicked off with Maeve in the saloon as Radiohead’s aching hit played on the piano.

Because one Radiohead song per episode is not enough! Later in “The Adversary,” Maeve gets a tour of the facility and learns how she and the other hosts were created and developed. Her devastation is punctuated by Vitamin String Quartet’s cover of the Kid A track.

Episode 8: “Trace Decay”
“House of the Rising Sun,” The Animals

The traditional folk song madef amous by the British band's 1964 version plays in the background as Maeve watches — rather unhappily — as Clementine Version 2.0 works her wiles on a customer.

“Back to Black,” Amy Winehouse

Later in the episode, but back in the saloon/brothel again, Maeve uses her new powers to control the bartender. Though there were no lyrics in this version of the hit, the line "I died a hundred times" makes this song feel fitting, considering that the madam has probaby experienced her own death considerably more than a handful of times.

“Exit Music (for a Film),” Radiohead

Radiohead, again. The title of the band's song foreshadowed what was to come in the season one finale. The track plays as Dr. Robert Ford (Anthony Hopkins) addressed his VIP guests, noting how Westworld was a “prison.” As he wrapped up his speech, Dolores Abernathy (Evan Rachel Wood) executes him, and the hosts begin their rebellion.

The rapper’s tune, which originally features Pusha T, was turned into a piano arrangement and used as background music during a flashback to when Logan (Ben Barnes) first got the Westworld pitch. Djawadi told Billboard in 2018 that show creator Jonathan Nolan asked him to do an arrangement of the song for the show’s Super Bowl trailer. “It happens to be actually that we have the same taste, because every song he comes to me with, I always go, ‘Oh, awesome, I would love to do a version of this.”

The show introduces a new park based on British India called The Raj, with the Stripes’ No. 1 hit on Billboard’s Alternative Songs chart reimagined with sitars.

The majority of Westworld’s covers are instantly recognizable, but Djawadi’s Japanese-inspired take on Wu-Tang’s 1993 tune requires a little bit more time before recognition hits. Its transformation makes it an amazing fit for the scene in Shogun World during which geisha Akane (Rinko Kikuchi) dances for the shogun, then unexepectedly beheads him.

The band’s hit single from In Utero, which topped the Alternative Songs chart in October 1993, transformed into a heartbreaking piano tune at the hands of the show’s composer. The first notes begin as host Akecheta (Zahn McClarnon) awakens in Mesa after being killed, hoping to find Kohana (Julia Jones) in the afterlife. An orchestral version of the song was also used as a trailer for season two.

Westworld once again turned to Radiohead in its season finale. In the final scene, a piano version of "Codex" begins to play as Dolores tells Bernard that they need each other. The song then merges into the original The King of Limbs Radiohead version.

Ahead of the sci-fi thriller’s March 15 premiere, HBO dropped a teaser that kicked off as if it were the next chapter in the Terminator franchise. So how fitting it was that GNR — whose “You Could Be Mine” was a standout on the Terminator 2 soundtrack — is featured prominently in the teaser. Halfway through the trailer, the band's rocker “Sweet Child o’ Mine” starts sweetly as a simple piano tune, but as the action builds, the orchestra kicks in to heighten the drama.