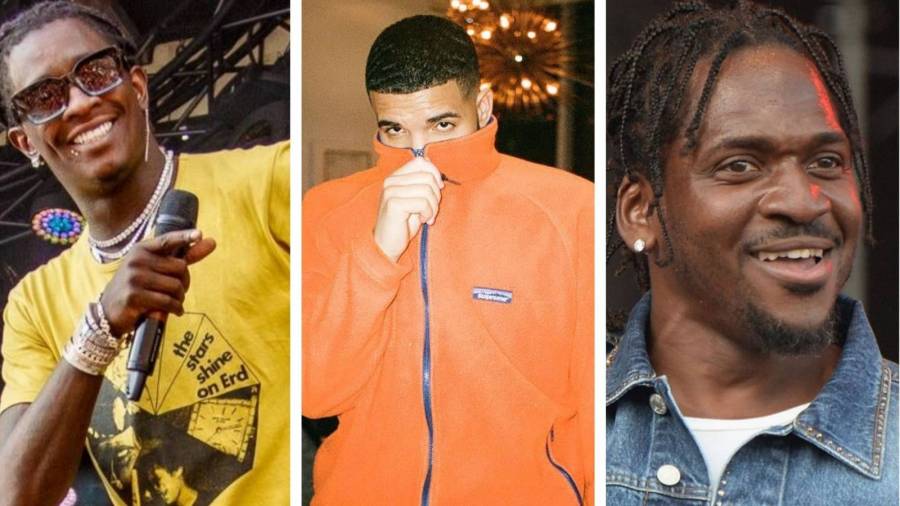 Twitter is having a field day with Pusha T and Young Thug’s apparent beef.

Not long after Thugger called out King Push for sneak-dissing Drake on the leaked Pop Smoke song “Paranoia,” the DAYTONA rapper fired back in an attempt to set Thug straight. In the process, he suggested the 6 God was basically a snitch and possibly reignited their long-running feud.

“You know reality bites/It’s chess, not checkers,” he raps in the song. “Those empty threats only sound good on your records/If the patois is not followed by a Blocka … I might even buy a home out in Mississauga,” the Canadian city right next to Drake’s hometown of Toronto.

Par for the course, reactions started flying in on Tuesday (July 7) as Pusha and Thug fans waged war. Some of Pop Smoke’s fans were disgusted by both Push and Thugs’ behavior and criticized them for even creating an issue.

“Pusha T and Drake can throw subs at each other for the rest of eternity, it’s Hip Hop,” one Twitter user wrote. “But keep that energy off Pop Smoke’s album out of respect for bro.”

Pusha T and Drake can throw subs at each other for the rest of eternity, it’s Hip Hop. But keep that energy off Pop Smoke’s album out of respect for bro.

Push and Drake engaged in a now-infamous back-and-forth in 2018 after Push dissed him on the DAYTONA track “Infrared.” Although Drake tried to annihilate the G.O.O.D. Music president with the “Duppy Freestyle,” the Clipse MC pulled out everything he had in his arsenal for “The Story Of Adidon,” exposing Drake’s “secret son” to the entire world.

In an interview with Rap Radar, Drake conceded Push won that round but admitted he had no interest in ever making things right with “that person.” Still, some Hip Hop enthusiasts think it’s time for Push to let his problems with Drake go, others are siding with Thug and some reminded the internet Drake did the exact same thing to Meek Mill.

Pusha T should not be revered as an icon. He is a crack cocaine dealer who comes up with nursery rhymes and puts them to music. Stop holding these people up as role models.

Normalize calling pusha t out for his cornball activities https://t.co/Uvz7BOF87c

Y’all loved every second of Drake dragging Meek for years but now Pusha got Drake on the hot seat with no end in sight and y’all copping pleas about how it’s old and tired and needs to stop. If that’s y’all king let him stand on his own two and stop bitching about Pusha.

If we’re keeping it 2 Virgils, nobody reallyyy wants the smoke with Pusha. That man will out-rap you and expose your whole family tree 😭

Gunna signed to YSL & Thug never took a penny out of anything he makes. His intentions were to put Gunna on so he can take care of his family.

Young Thug paid Lil Baby to stay out the streets & stay in the studio.

How could you hate Thug? pic.twitter.com/vR4hycVh7f

Everyone complaining about Pusha T not letting his foot up off of Drake are the same people that didn’t bat an eyelash when Drake was doing the same to Meek Mill.

Drizzy heard the Pusha verse and said not on his watch pic.twitter.com/hvQ2Ph9wGW

drake and pusha t still beefing in the middle of a pandemic. you gotta respect the commitment

Anytime Pusha T's part comes on in a song. pic.twitter.com/ZYwlJhRzSE

Gonna talk about it in a bit but nah Pusha T did nothing wrong IMO. I think Young Thug is more upset that it’s about Drake(his boy) than it being on Pops album

I agree it wasn’t the time and place, but Calling that pusha t verse mid in the same year drake put out toosie slide is very brave pic.twitter.com/EDiGdRE7Wy