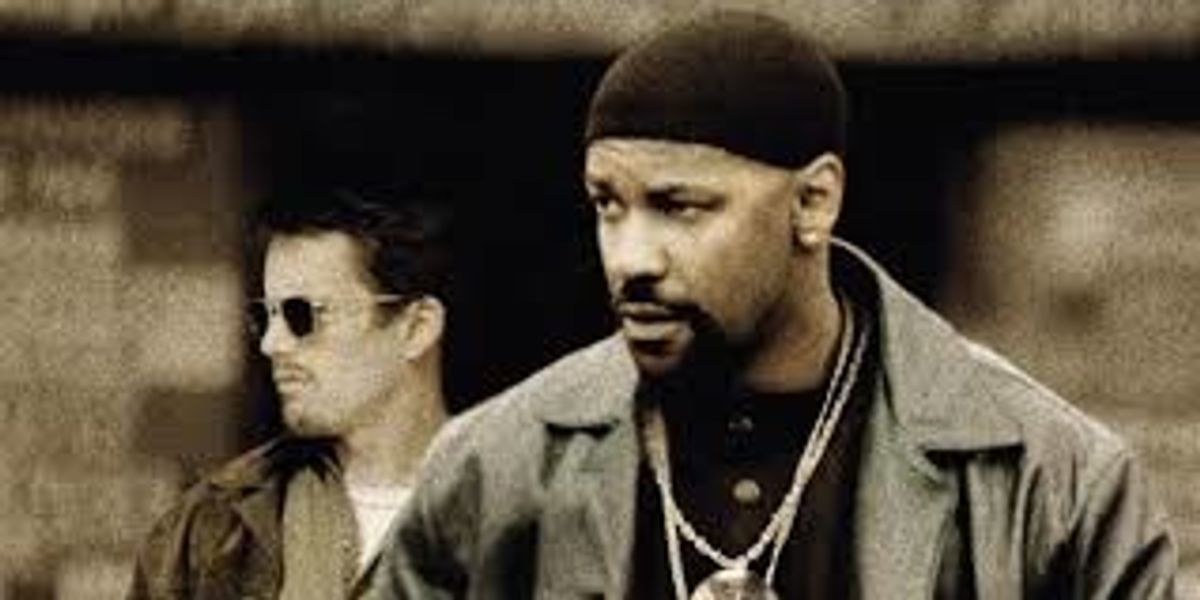 On October 5, 2001, Training Day was released in theaters in the United States.

The David Ayer film follows two LAPD narcotics cops played by Denzel Washington and Ethan Hawke. Detective Sergeant Alonzo Harris (Washington) evaluates beat cop Officer Jake Hoyt (Hawke) for 12 hours to see if he has what it takes to survive in his unit (and on the streets) as a detective.

This crash course in Narc 101 leaves Hoyt at the mercy of Harris dishing out his brand of “justice.” What starts as an evaluation becomes a firsthand look at police corruption, with Hoyt unsuspectingly (and unwillingly) going from pupil to accomplice. Alonzo serves as judge, jury, and executioner of the people he’s appointed to protect, manipulating Jake’s perspective on what law and order really mean.

The film was a critical and box office success. Training Day would go on to gross over $104 million and earn both Hawke and Washington Academy Award nominations, with Washington winning for Best Actor. The movie has since become a staple in pop culture, with Washington’s portrayal as Harris serving as a master class in film villainy.

More important than the script itself, Training Day is a jarring and vivid look into police activity. Yet it’s a side seen consistently by those who have felt that law enforcement officers operate similarly to the heel played by Washington. Police officers may not be as charismatic and cunning as Alonzo Harris, but his tactics and disregard for the public’s safety are congruent with real-life officers. Given the current climate of police-civilian relations, Alonzo’s recklessness is par for the course in too many areas.

One adage that Harris offers to Hoyt is “to protect the sheep, you gotta catch the wolf, and it takes a wolf to catch a wolf.” Alonzo uses this line as justification for his unsavory police work, such as presenting a false search warrant and murdering a former officer.

Of course, there are many in law enforcement who move within these same parameters. Much like real life, we see Alonzo’s schemes are only as devious as the officers who aid him. One scene, in particular, wherein Harris and Hoyt join a group of cops who hatch a plot to rob a fellow officer, highlights how law enforcement can even be merciless to its own. These men walk the line between good and evil while trying to convince the public, their colleagues, and even themselves that their behavior is a justifiable means to an end.

In reality, “good cops” are too often punished for trying to speak out against corruption. As The Atlantic pointed out in July 2020, “Police Punish the ‘Good Apples.'” Musa al-Gharbi wrote: “Police officers in the United States engage in all manner of bad behavior, such as excessive force, sexual misconduct, financial impropriety, and the manipulation of evidence. Holding them to account criminally, civilly, or professionally is extremely difficult, even in cases involving blatant malpractice and misconduct. Yet, even as bad cops evade punishment for wrongdoing, those who stand up to corruption, report negligence or abuse, or decline to comply with bad orders are frequently marginalized, demoted, or outright fired.”

To some, being a cop means belonging to a brother/sisterhood that’s dedicated to protecting each other above all else. This year has seen numerous reports of police officers going above and beyond to protect each other–even if it means bending and breaking the law to save a fellow officer or using their influence to ostracize a fellow officer who might speak out. In these instances, the “good cops” are viewed as untrustworthy, which is what Ethan Hawke’s character is perceived to be, since he doesn’t want to use his powers for evil.

Still, there are police officers across the country who share the same morals and values as Jake Hoyt. They want to be the knight in shining armor fighting for all that is right and noble. Hoyt’s nobility and naivety represent an albatross for those in law enforcement who go “by the book.” They are torn between earning the loyalty of their comrades and earning the trust of the taxpayers. Hoyt is resistant to Alonzo’s recruitment efforts to the dark side, but plenty of officers cave into peer pressure and wind up looking out for the interests of their own and not the people they’ve been sworn to serve and protect.

To say Training Day was ahead of its time may be a reach. There were certainly films dedicated to capturing police corruption prior to its release, such as The Glass Shield (1994) and Gang Related (1997). But Training Day stands apart in the commercial and critical success it’s garnered, as well as its insight into the many layers that police corruption occupies. Director Antoine Fuqua was able to illustrate how the power of the law can indeed be a tool of oppression if left in the wrong hands.

Beyond the Oscars nominations, the star-studded cameos, and memorable lines like “King Kong ain’t got s*#t on me!” Training Day leaves us with a very sobering warning about law enforcement in our country, even 19 years after its release: The system meant to protect the rights of the average citizen contains more Alonzo Harrises than Jake Hoyts.