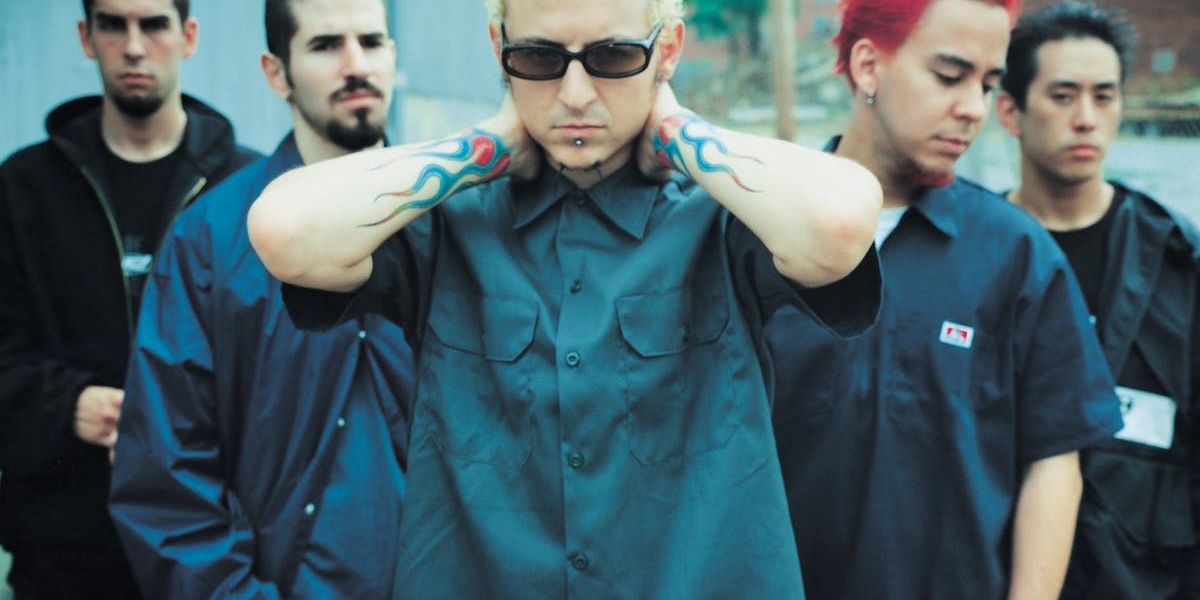 On this day 20 years ago, Linkin Park released their debut album, Hybrid Theory.

The SoCal rock band—then comprised of rapper Mike Shinoda, guitarist/bassist Brad Delson, DJ Joe Hahn, drummer Rob Bourdon, and singer Chester Bennington—were swiftly swept into the nu-metal category, although even that vague label proved to be a bit limiting. Although the meteoric success of Hybrid Theory brought attention to similar artists like Papa Roach and Staind, Linkin Park have maintained a singular legacy among their peers, with their debut remaining their best piece of work.

Much of the appeal of Linkin Park can, of course, be credited to Bennington, whose death by suicide in 2017 brings an even heavier weight to the album’s deeply melancholic lyrics. The subject matter of Hybrid Theory largely pulls from the childhood trauma of Bennington, who was barely 21 at the time of the album’s release. And although some of the songwriting on Hybrid Theory dates back to Bennington’s high school years, the way he puts it, his involvement in Linkin Park almost never happened.

“I had basically decided to retire from music,” Bennington said in 2014. “I’d got a job in real estate and thought that while I would probably still make tunes for fun, I would need to find something else to do full-time.”

A mutual acquaintance connected Bennington with Shinoda, who was looking for a singer for his band. Before he knew it, Bennington was on his way to California from his Arizona hometown, and the group got to work.

Linkin Park admitted to having stumbled into some “lucky” circumstances that contributed to the smash success of Hybrid Theory. After endlessly trying to score a record deal with no success, a friend of theirs landed a job at Warner Bros. Records. As part of this friend’s contract with Warner Bros., he’d get to sign his first band, which was Linkin Park.

Although it might’ve been sheer luck that got Linkin Park a coveted major label deal, the band went on to prove that they’d earned it. It’s been said that Linkin Park were businessmen as well as bandmates, but as Shinoda once explained, they only earned that reputation because they “were prepared to do everything in [their] power to be successful on all levels.” That meant no rock star tomfoolery, no scandals, no shallow beef with their contemporaries. By keeping their heads down and staying focused, they created Hybrid Theory, the highest-selling debut album by any rock band other than Guns ‘n’ Roses.

Frankly put, Hybrid Theory was just, well, a lot better than anything else under the “nu-metal” umbrella at the time. Linkin Park refused to even call themselves nu-metal, because their inspirations were just way too broad. Bennington cited Madonna as one of the artists who initially made him want to be a musician growing up. Shinoda has compared the album’s glitchy record scratches to that of ambient pioneer Aphex Twin. Linkin Park grew up worshipping hardcore icons like Minor Threat and Circle Jerks and were as influenced by ’90s grunge bands like Nirvana and Alice in Chains as they were early hip-hop groups N.W.A. and A Tribe Called Quest.

Linkin Park’s sound might’ve been tricky to pin down, but it was perhaps their hodgepodge of influences that contributed to their massive appeal. Take the crowd-pleasing synth riff of “Papercut” or the standout melodies of “Forgotten”; whether they knew it or not, Linkin Park were priming themselves to be enjoyed by the masses.

But arguably the biggest factor that contributed to Linkin Park’s mainstream success was the chemistry between Bennington and Shinoda. Bennington’s rasp is unmistakable, but it wasn’t powerful enough to stand on its own. Shinoda is an energetic rapper, but he didn’t quite have a sharp enough flow to compete with other rappers. Together, however—layered over each other, weaving in and out—Bennington’s singing and Shinoda’s rapping were a thrilling combination.

After Hybrid Theory‘s release on October 24, 2000, four songs from the album were released as singles: “One Step Closer,” “Papercut,” “Crawling,” and “In the End.” While each of those songs fared well as singles, it was “In the End” that ultimately helped propel Hybrid Theory to number two on the Billboard 200.

“In the End” was virtually tailor-made to grab your ears, beginning with five words—”It starts with one thing”—that act as a call-to-arms for listeners to recite the rest of the song. After Shinoda rattles off internal rhymes, the verses cleverly morph into Bennington’s bombastic earworm chorus. It’s the kind of heavy, loud music that doesn’t irritate the ears; instead, it provides a space to let the strifes of living slip away, if only for three and a half minutes.

Hybrid Theory is a decidedly sad record. While lines like, “In the end, it doesn’t even matter” might’ve felt platitudinal to some, the relatability of the album’s lyrics struck a powerful chord with a massive audience—especially among those who grew up around broken families, substance abuse, and psychological disorders like Bennington did.

Bennington’s death was especially jarring, not only because of the nature of it, but because he’d spent half his life singing about his struggles to fans. While 41 was far too young an age for him to go, the best we can do as listeners is be thankful for the time we had him with us.