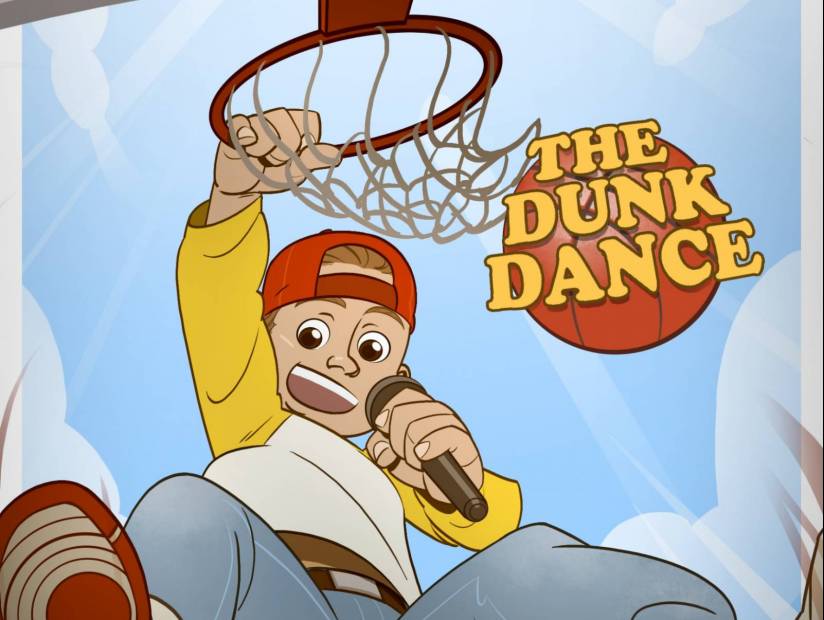 #RapDad is a common hashtag among older Hip Hop heads to describe life as a father. What that entails could be anything from picking up your kids from school to spending quality family time with them at home. More than anything, it’s connecting those two identities together – to have the swagger of being a great role model while sharing your love of Hip Hop culture with your kids.

It’s why Daniel Isenberg wanted to create a children’s book that was influenced by his formative years as a performer and being the cultural arts director at the Boys & Girls Club of Northern Westchester. Isenberg, who went by the stage name Stan Ipcus and rapped with Matisyahu before, has covered Hip Hop for nearly 10 years, where his writing has appeared in XXL and on websites like NahRight, Complex, Pigeons & Planes, Urban Legends, and UpNorthTrips. In 2019, Isenberg, now the creative director at Octagon, linked up with illustrator Bowen Jiang to publish My Name Is Spit: The Dunk Dance, inspired by raising his three sons and his deep appreciation of the five elements of Hip Hop.

The story follows fourth-grader Sam Spitero, who is used to hanging out at home after school, playing video games, and listening to music. After discovering his mother has to work late hours, he’s forced to go to an after-school program at the Boys & Girls Club. He learns to adjust to the new environment and meet new friends, eventually becoming interested in joining the club’s new Hip Hop workshop.

The participants in the workshop get excited when they learn they’ll be a part of a Rap talent show. So they put their heads together to create their own basketball-themed Hip Hop song and performance from scratch. But, there is a problem. Spitero is too nervous to rap in front of everyone and has to overcome his stage fright. Readers find out if his anxiety will hold him back from winning the grand prize.

My Name Is Spit: The Dunk Dance released last December just before the holidays. Isenberg wanted total creative freedom, deciding to publish the book independently through Amazon Kindle Direct Publishing. Shortly after the release, My Name Is Spit went No. 1 as a new release in the Children’s Basketball Books category on Amazon. As a thank you, a percentage of the sales will be donated to the Boys & Girls Club where Isenberg worked.
“I came in at a time where they were just starting to develop this cultural arts program at the Boys & Girls Club in Northern Westchester,” Isenberg says of his time there. “As their new director, it was kind of my baby. I could shape it how I see fit. Right off the bat, I made sure we had Mac computers in our lab. We set up a microphone and a mini, makeshift recording studio. Immediately kids from the high school were coming and staying late after school to start recording their own songs. And that was a really cool win to see kids have a place where they could come and be creative.”

“We eventually made an album filled with all original songs that were written and produced by Club members and staff, which the kids took a lot of pride in and so did the staff,” he adds. “So we really did a lot of special things over the seven years I was there and I’m really proud of the work that was done.”

In 2020, Isenberg is continuing to increase the visibility of My Name Is Spit, getting physical copies in local bookstores and libraries. With support from other #RapDads in the community, he hopes the character Spit motivates kids to pursue their passion in music and maybe one day become MCs too.

GroovyTracks spoke with Isenberg about the inspiration behind My Name Is Spit, what being a #RapDad means to him, and plans for writing another book in the My Name Is Spit series.

GroovyTracks: What inspired you to write a children’s book?

I was looking for a way to evolve my writing and do something that felt a little more substantial and connecting to what was going on in my life now. At first, I thought about writing a movie script but I didn’t feel really comfortable with that format. I’ve tried in the past and it really wasn’t working that well. And from reading all these early children’s chapter books with my kids – I have three kids right now, and two of them are at the elementary school age where you are starting to read on your own or you are reading things that are more than just picture books. Through reading books of that format, it felt like a really comfortable format to try and write something.

I really wanted to try and tell a Hip Hop story that was related back to my own life through inspiration of what is going on with my own kids, them discovering Hip Hop, and a lot of the work I used to do at the Boys & Girls Club when I was the cultural arts director there. I developed a story about this kid who discovers a Hip Hop workshop at the Boys & Girls Club and he ends up taking the name Spit as an MC name. The story focuses around him.

GroovyTracks: Is this the first Hip Hop children’s book of its kind?

Daniel Isenberg: I don’t know if I am the innovator of it, but I did notice there weren’t a lot of books in this children’s book lane that were focused on things revolving around Hip Hop. I was reading a lot of stuff with my kids where it took place in a school setting or it was revolving around kids and their friends and their families. Like Diary of a Wimpy Kid, Ms. Cuddy Is Nutty!, things like that. There are all these books that were focused on a school setting. I thought it would be really unique to focus on that after-school setting, which I spent a lot of my time working after-school programs for 15 years, specifically with the Boys & Girls Club.

There really isn’t anything that I had come across that was really about Hip Hop. I wanted to do something that was a unique take on it, where you are almost teaching the kid how to become an MC while also telling them a story that has a beginning, middle, and end. How can I infuse these lessons? How do you go about developing your own rap name? Or writing a song? Or talking about bars? Having a theme? And performance? And all the things that go with that. The anxiety, working together with people, making beats, and coming up with dances. All the Hip Hop elements.

I also wanted to do something that was relatable to parents my age, who grew up with Hip Hop. So there are little Easter eggs throughout the book whether it’s the chapter titles named after Hip Hop songs. Or if they are reading it with their own kids, they can connect with the story in their own way. It takes them back to being a kid, when they first discovered their love of Hip Hop.

GroovyTracks: My favorite one was “My Name Is.” That was really good. Just the way you wrote that and how he figures out what his rap name is.

Daniel Isenberg: Yeah, I would hope that chapter inspires other kids to be like, ‘Oh, let me figure out how I can come up with my own name based on whatever name my parents gave me or my nicknames my parents have for me.’ Something that has to do with my personality or my physical attributes or whatever it is. Kind of relating it back to how other MCs that are popular now got their name. I thought that was a fun way to get into the story and begin his journey into being an MC.

GroovyTracks: As a #RapDad, what does that term mean to you?

Daniel Isenberg: For me, it’s always been about the dads or the parents that have a love for Hip Hop themselves and are sharing that love with their own kids. I think sometimes it is challenging because I am not necessarily going to play Ready to Die for my six-year-old kid. You know what I mean? But finding those ways to connect with them about music. Whether it is playing songs that they love that are current that we can bond over. My kid loves Drake and Travis Scott and artists like that. I like them too. If I put on A Tribe Called Quest, “Check the Rhime,” or something and I’m like, ‘Oh, they’ll love this and this is pretty clean and safe.’ They might not gravitate towards it, but who knows? Maybe they’ll like House of Pain, “Jump Around,” or something like that. But beyond that, it’s talking about music, teaching them about the culture and beats and all that type of stuff and kind of seeing where they’re at [with it]. I think #RapDads are guys, and I think parents in general, that are out there sharing their love of Hip Hop with their kids and doing it in a way that they can connect with their kids.

GroovyTracks: After reading My Name Is Spit, to me, he could be a childhood hero. A kid reading this could be in a similar situation, reads this narrative arc about Spit, and wants to do it too.

Daniel Isenberg: That was something that was challenging for me is figuring out how to make this story really relatable and have that arc. But I think the fact that the story starts out with Spit and he’s this kid who is used to coming home from school, chilling, and playing video games. Not having a too inspired lifestyle or not really focused on anything too creative, but he does like music. He’s an anxious kid who is set in his ways, but he has to go to the Boys & Girls Club because of things that are happening at home with his mom having to work late. 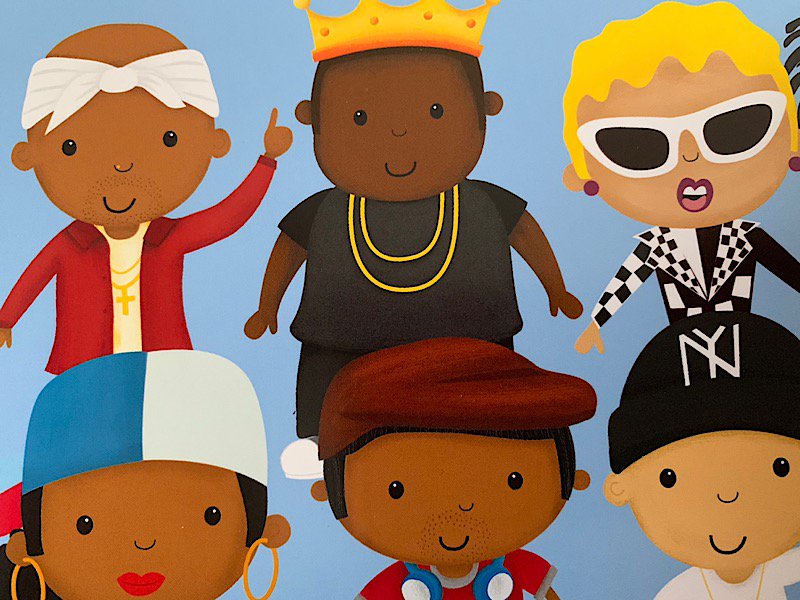 It’s him overcoming his anxiety, socially. Being in this club and having to meet new friends and having to explore his own identity and write songs and rap for people for the first time and then eventually have this huge performance.

It’s just taking this kid who is in this very small world and opening him up to this bigger world and through the process, discovering how to overcome anxiety and make friends and be a part of something that’s memorable and triumphant. I hope kids can really relate to that. I know my own kids get anxious about things. Even if they’re really interested about things, they might be really nervous. And it comes up all the time, even with all of us as adults. I think there are some really good lessons in there and hopefully he’s a kid that people can look up to.

GroovyTracks: This book is a first of a series. What are you thinking for the next one?

Daniel Isenberg: We have ideas for a couple other ones. I think the challenge for me is between work and raising three kids at home, finding the time to do it. This one took about a year from start to finish. That’s just from writing it, rewriting it, working with an illustrator, getting the cover right, and laying it out right. It was a big project for me. Between work and life, I was proud to be able to do it and get it done.

To purchase My Name Is Spit: The Dunk Dance, head to MyNameIsSpit.com or Amazon.com.