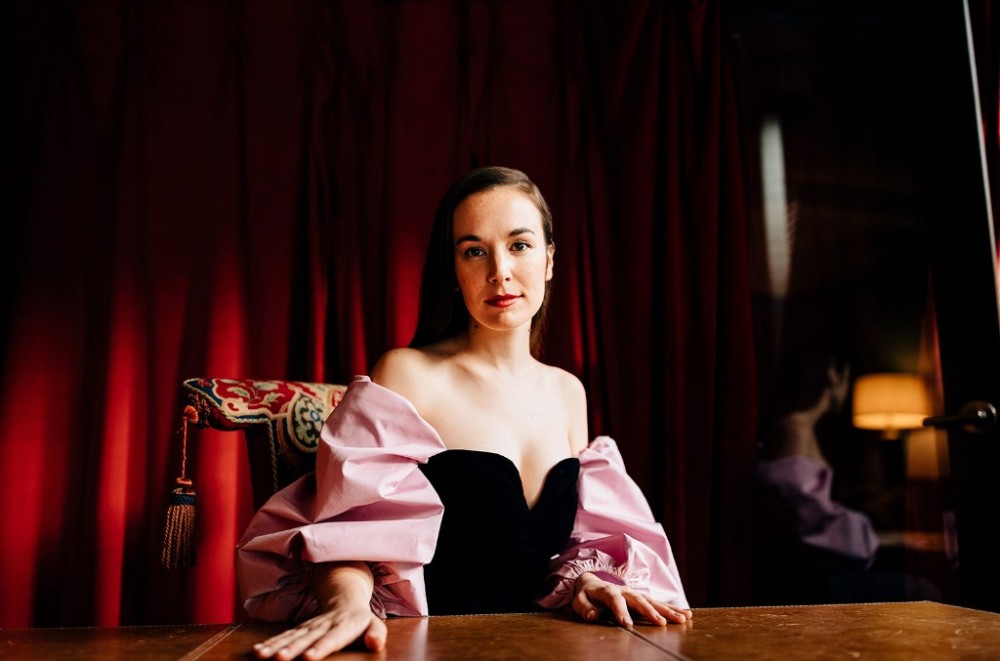 It wasn’t written as a love song for the end of the world, but Margaret Glaspy’s “Killing What Keeps Us Alive” is exactly that: a romantic, alarming and urgent reminder that our presence may be fleeting, but love doesn’t have to be. The chorus, which she sings with a robotic modification at first, speaks to that: “We keep living like we’ll never die / And we keep killing what keeps us alive.”

“It isn’t not about, you know, the state of the earth,” says Glaspy of the track, which kicks off Devotion, her sophomore album out March 27 on ATO Records. “It is about that, and it’s also about being a young person in that state. You’re still falling in love and life still keeps going [while] the earth is having its own moment. One is not exempt from each other; it’s definitely intertwined consciously on that song.”

Devotion doesn’t dwell on the world going up in flames so much as forging something beautiful — and foreign — from that fire. On 2016’s Emotions and Math, Glaspy, firmly rooted in the indie intersection of rock and folk, clutched a guitar and established herself as a talent to watch following her years at Boston’s Berklee College of Music and two self-released EPs. She toured in support of Emotions and Math for three years, and returning home to New York offered an opportunity to recalibrate and switch up her palette in the process.

Devotion is as experimental as it is classic, in that it builds on Glaspy’s desire to expand her multi-instrumentalist skill set and her lyrical profundity. From the shimmery major chords and unabashedly adoring choruses of “Without Him” and “Young Love” to the metallic clashes of “You’ve Got My Number” and the dizzying breakdown of “Consequences,” Devotion is a study in contrasts and cohesion: each song sounds further afield from Emotions and Math, yet every verse fortifies Glaspy’s voice and the vulnerability she chooses to embrace in life, love and a world gone mad.

Below, Glaspy walks Billboard through Devotion, the surprising inspirations that worked into the fabric of the album, why she went with a Victorian portrait vibe for the cover art, what “devotion” means to her and more.

How did the outside world — and all of its current craziness — have an impact on the music you’re making?

You can’t help but be — just like everyone. When you’re an accountant or a fitness instructor or a musician or artist, whatever you’re doing, everyone in the world, they’re affected by it. It’s not the focus of the record, necessarily, but I was in the water just like everyone else, looking around, like, “Whoa, this is wild.” I wasn’t exempt from it, but it wasn’t necessarily the focus of the record; the focus was, I had gotten off tour, and had started to really decompress and see where I was at in life in general. I wanted to go after the things that earnestly interested me. Seeing that my sonic preferences had even changed while I was on tour and getting curious about different avenues to take for recorded music, and then on top of that, just wanting to find my own personal compass again — those were big aspects of this record for sure.

Did any artist or outside inspiration leave a particularly strong imprint on Devotion?

I’d always been hip to Alexander McQueen, the designer, and I think that one thing that really pushed me was learning more about his life and his lineage. I started to watch a lot of his runway shows and got really into his clothing, his art, what he did in his lifetime. That inspired Devotion and made me want to shift directions a lot. I wanted to make music that was inspired by his clothing, and also wanted to make music that made sense of the clothes that he made, that you could wear them or even just look at them, and the music would make sense on some level. … He had a sense of being able to mix a lot of unexpected mediums, and also had a real eye for the future. Sometimes the things that he was making felt like science fiction.

Of course, the things that I’m making, everything is very derivative of something I’ve heard, and you can’t help it — that’s kind of the joy of music in a way, that you’re just going to be kind of recycling bits that you’ve got at some point. He inspired me to want to reach past what I’ve used before and try and make the things I was hearing instead of just recycling all the things I’ve used in the past. So, yeah — a lot of different angles in the way I was inspired by his aesthetic. He was also just a brilliant, brilliant man who was a transcendent artist, for sure, that made me want to just do my best.

Your voice is crystal clear, and a potent messenger, throughout Devotion:It’s romantic and loving in some songs, but downright devastating in others. Which songs best demonstrate the challenges you set for yourself with Devotion?

I think one of the biggest songs that was an orienter for the record was probably “Killing What Keeps Us Alive.” The demo feels very much so like the record version — synthesized vocals, and also, I had written a short story that was the inspiration for that song. All of a sudden it put me on the map, in my brain, of what the record was about. That was a song that I think challenged me to make a lot of different elements, production-wise, lyrically, be vulnerable, and also at the same time kind of command the experience.

When you start to work in a different medium or in ways that you haven’t, you’re vulnerable anyway, because you’re kind of off your game — I’m not just playing the guitar the whole time or trying to construct music the way I have been. I felt a little bit like, “Whoa, I’m making myself vulnerable, consciously.”

In that process of making that song, I felt like I was doing things that I hadn’t done before and I had to power through it and make some decisions in order to get to that spot. When I did, that was the first time that I had felt proud of it: I had written a lot of s—ty songs before that, that poked at it, and that was the first success of me finding a sonic and lyrical footprint that made sense together all in one fell swoop.

Are any songs in particular feeling great in that regard right now, or are really popping in live performance?

My favorite song off the record is “Devotion.” I’m really excited about playing that live. We’ve been working on a bunch of different ways to play it and I think we’re moving in the right way. We’re reinterpreting some of the old record. We play “Emotions and Math” in a way I’m really excited about, so that’s been really fun to reimagine. Of both [albums], “Devotion” is my favorite from this record, and “Emotions and Math,” the way we reinterpret it, I’m excited about that, too.

I’d love to hear the backstory for this dramatic portrait we have of you for Devotion’s cover. How did you arrive at this image?

“Devotion” wraps up so many different aspects of my life — being devoted to your partner or letting your guard down to be devoted to something. I think that these days, it can feel like an antiquated notion, being truly devoted. Things feel a little bit fleeting, at the moment, or things come and go quickly.

I’ve realized that, sometimes, as an artist, you remember and forget why you’re doing it, what’s your compass, what’s your purpose. One of mine is to be in the world as a young artist and say that I am devoted to being myself, to the art that I make, and to being earnest. I think that’s something that seems like it goes out of style at times. It’s saying what you need, being earnest with your life and with your words and the things that you do.

The record cover was a piece of that — making something that felt beautiful. There’s not a huge sense of irony in it; it’s really just having something feel regal and earnest. Maybe the only sense of irony is that it does feel antiquated — to be devoted to your partner or one job or even one sense of something does feel like an older kind of archetype or something. Where the sense of the cover comes from is me kind of posing as something I’m devoted to, as being an artist. But the actual sense of devotion, it doesn’t feel like it’s super in vogue. [laughs]

I suppose it’s me kind of putting my stamp on showing that I do like — especially as I get older — to be earnest in the things that I do. I feel less and less afraid of it. These days, especially young people, I hear all the time that it’s kind of square to say what you mean or not have some kind of sense of irony about you. It’s OK to say “I don’t feel well” and “I feel I love you,” “I don’t love you.” Instead there are these loopholes to get around where you don’t actually have to commit to anything. It’s a convoluted way to answer the question, but I think there’s something in there that I think I’m proud to be an earnest person. That’s kind of where that comes from.