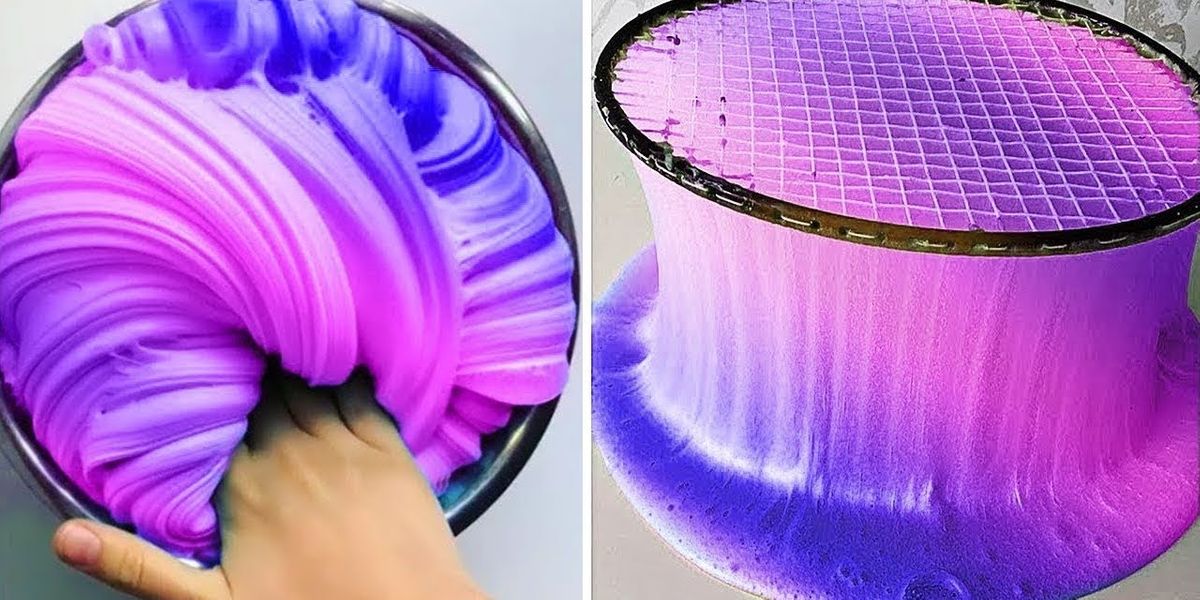 Life is pretty stressful right now, and if you’re like much of the rest of the world, you’ve turned to the Internet for solace.

Some of us find escape in video calls and games, others in Netflix and music, others in endless scrolling. But if you’re looking for a new, relaxing, visually stimulating way to ease your frayed nerves, perhaps consider watching videos of slime, soap-cutting, or any other form of “oddly satisfying” content.

The world of “oddly satisfying” content is large and undefinable. There are millions of different types of content optimized to satisfy and relax you—from ASMR to binaural beats to zit-popping, the list goes on and on. The Reddit thread “oddly satisfying” is a hotbed of these types of posts, as are YouTube, Instagram, and TikTok.

For the purposes of this article, we’ll stay away from auditory ASMR, instead focusing purely on visual content. This is your invitation into the safe, magical, fanciful world of colorful paint, billowing slime, and deliciously skilled workers doing their jobs well.

The Science Behind Oddly Satisfying Videos

Why do we find these types of videos so satisfying? Many researchers have attempted to understand the popularity of these “oddly satisfying” videos. Psychologists have identified something called a “Goldilocks feeling”—AKA the feeling of satisfaction you get when everything is “just right.” Interestingly, people with OCD often never experience the “Goldilocks feeling,” which leads them to repeat tasks over and over while never seeing their completion. These “oddly satisfying videos” can provide a sense of completion and satisfaction for people who never or rarely experience these feelings in real life, but they can also be pleasing to anyone, OCD-diagnosed or not.

At the very least, all these videos are portraits of sensations many of us rarely experience. In real life, things are constantly breaking, fraying, spilling, or combusting—that’s just life. But these videos show an alternate reality where everything is done perfectly. Colors mix together into beautiful new shades. Cucumbers unfold into perfect slices. Everything aligns and fits together.

Yet not all these videos feature acts carried to completion. Many end with sand crumbling, things falling apart, or huge messes being made. In light of this, there really is no clear scientific conclusion as to why we find these videos so satisfying. In that, they’re like any form of great art: made magical by some inexplicable X factor, but undeniably good.

All this might seem freaky, but people have been pursuing brief bursts of relaxation for thousands of years—Tibetan Buddhist monks often spend hours or days creating colorful mandalas out of sand, only to immediately destroy them. We are all seeking peace and relief from suffering, and if watching someone remove a blackhead gets you there, by all means, enjoy it.

From oozing slime to hot knives to glorious paint-mixing, here are some of the most entertaining and relaxing “oddly satisfying” videos out there.

Humans have been painting on cave walls since the beginning of time. Perhaps the greatest modern relaxation-focused painter is Bob Ross, whose videos have developed a cult following.

Today, though, people have discovered ways to make paint itself into a soothing, satisfying visual experience. Recently, a TikTok user named Tony Piloseno became a topic of conversation when it was revealed that he was fired from his job at Sherwin-Williams when they discovered he was using their products on the app.

Miloseno began posting paint-mixing videos while working at the paint store, and soon enough his TikTok racked up millions of followers. But when Piloseno made a video that involved mixing blueberries with paint that led to thousands of customer inquiries, he was fired.

Still, he’s continuing to create videos, and clearly the folks at Sherwin-Williams lost out in a big way because they don’t understand how the youth market works.

Piloseno is far from the only person to take advantage of paint’s gooey, hypnotic beauty.

With millions of videos dedicated to it and more emerging every day, slime may be the most popular of all of these trends. Psychedelic, glittery, oozy, and magnificent, the world of slime is rich and vibrant and even healing. Today, some psychologists have even started prescribing slime videos to patients who need relief from anxiety.

Anyone who watches baking shows understands the deep satisfaction that comes from watching a chef spin some sugar, flour, and frosting into a thing of beauty.

Cake-making—specifically, the art of creating plumed frosting embellishments—is a popular favorite in the “oddly satisfying” world.

But you can find high-speed videos of any sort of cooking. Ever wanted to see someone create a giant pancake?

Soap-cutting is often used as a form of auditory ASMR because of the satisfying sounds created by a knife slicing through a bar of soap, but we’re including it here because of the visual beauty of what can only be called an art form.

YouTube is full of videos of bars of soap being sliced and carved into magnificent shapes. The way that soap fractures into a thousand little pixel-like soap fragments is genuinely mystifying to behold—watch and weep.

This classic has 21 million views:

Zit-popping and other kinds of body-related videos are explosively popular online. These videos, which should technically be revolting and disgusting, do offer many viewers a sense of deep satisfaction.

There are many reasons for this. Disgust, especially when experienced in a controlled, safe setting, can provide us with feelings of deep satisfaction and can even help our minds prepare to identify and face genuine disgust in the real world. It can also thrill us.

“It’s the same kind of thrill people get from, say, riding a roller coaster or bungee jumping — it activates the experience the typically comes with a real kind of danger while actually being protected from the harmful effects typically associated with those situations,” says Daniel Kelly in Yuck!: The Nature and Moral Significance of Disgust.

Not everyone loves roller coasters, and in the same way, not everyone loves watching ingrown hairs being painstakingly removed from someone’s flesh in high-definition. But there are a lot of people out there who do love these kinds of videos, many of which have racked up tens of millions of views.


Can you spot this Blackhead? Extracted on the Upper Lip

You might be nauseated by these videos or they might help ease you into sleep. Either way, there’s nothing wrong with you—some people like watching horror movies and others don’t. Just be careful before you share one of these as not everyone can stomach them.

In case you’re having trouble choosing between all these options, or want to be surprised, the Internet offers literally countless compilations of extremely satisfying things happening.

Many claim that they will “induce sleep and relax your nerves,” as the above video promises. At the very least, these videos are an invitation into a world where every cap opens, every cut is clean, and there is no such thing as 2020. Who needs therapy, right?

What’s your favorite type of oddly satisfying video? Let us know on Twitter or in the comments!