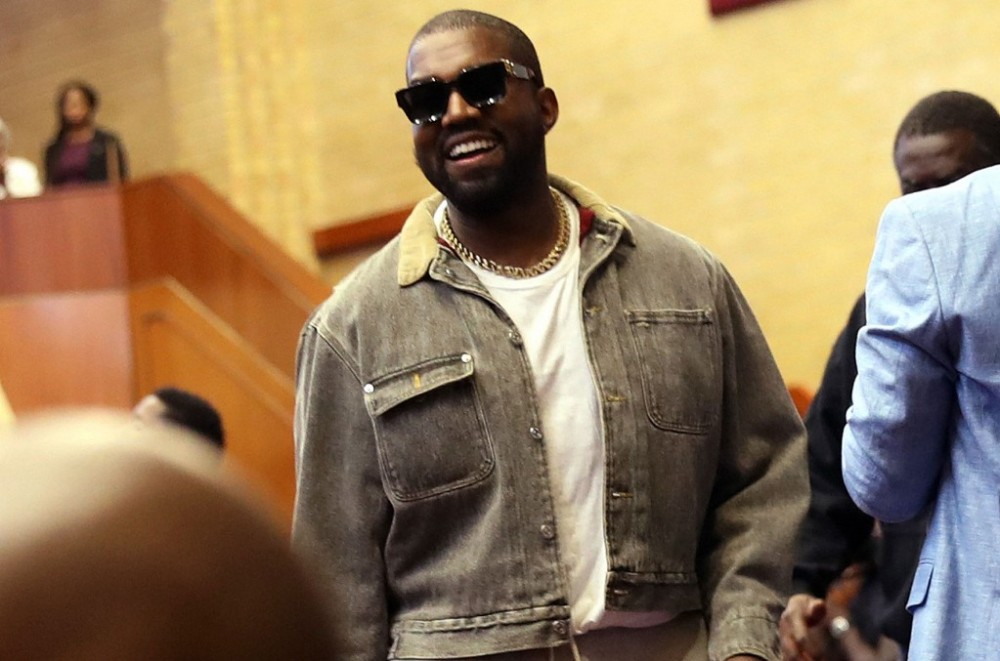 The rapper also said his campaign slogan is "YES!"

Though he still doesn’t appear to have taken even the most basic steps to register as a candidate, Kanye West finally revealed the political vision for his purported presidential run in an interview with Forbes magazine. The biggest takeaway? West claims he is no longer on the Trump train, saying that he’s put the MAGA hat on the shelf — “I am taking the red hat off, with this interview” — which he claims to have originally doffed as a “protest to the segregation of votes in the Black community.”

More importantly, though, he said he originally threw his support behind the real-estate-mogul-turned-commander-in-chief because he is the “closest president we’ve had in years to allowing God to still be part of the conversation.” Oh, and he also likes “Trump hotels and the saxophones in the lobby.” Hard to follow at times, West’s outlook for his alleged White House bid veers wildly from proclamations that he intends to model his administration after the fictional Black utopia Wakanda form Black Panther to his adamant assertion that the last-minute entry into the race is not a stunt to promote his upcoming album, which he plans to give away for free.

As previously reported by Billboard, at press time West does not appear to have filed the necessary paperwork with the Federal Election Commission to officially enter the race, but in the interview with Forbes he claims to have already picked a running mate, obscure Wyoming preacher Michelle Tidball; at press time a spokesperson for West had not responded to multiple requests from Billboard seeking confirmation on the rapper’s presidential aspirations or the veracity of the quotes in the Forbes story.

Admitting that he has to make his decision about running in the next 30 days, West realizes at that point he’ll have missed the filing deadlines for many key states, though he thinks there’s a good argument to be made that the COVID-19 pandemic could be cited as a reason for his late registration. “I’m speaking with experts, I’m going to speak to Jared Kushner, the White House with Biden,” West said, referring to the president’s son-in-law and his potential Democratic rival.

As of now, West said he has no campaign staffers or infrastructure, but is relying on his two trusted advisors: wife Kim Kardashian-West and Tesla/SpaceX founder Elon Musk, who he would put in charge of the nation’s space program.

Check out 10 of the wildest assertions from West’s interview:

— His campaign slogan is, simply, “YES!” and his party banner is the “Birthday Party,” because “when we win, it’s everybody’s birthday… When I’m president, let’s also have some fun. Let’s get past all the racism conversation, let’s empower people with 40 acres and a mule, let’s give some land, that’s the plan.”

— West has never voted and just recently registered to vote for the first time on Monday, two days after he announced his intention to run. He also said that he decided he was going to launch his campaign after accepting the Michael Jackson Video Vanguard Award at the 2015 MTV VMAs. “It hit me to say, ‘you’re going to run for president’ and I started laughing hysterically, I was like this is the best, I’m going to go out there and they’re going to think I’m going to do these songs and do this for entertainment, how rigged awards shows are, and then say I’m president. And I just laughed in the shower, I don’t know for how long, but that’s the moment it hit me.”

— He said he got coronavirus in February, but strenuously opposes taking a vaccine to cure it, believing that any potential medical intervention is part of an alleged satanic mind-control conspiracy. “It’s so many of our children that are being vaccinated and paralyzed… So when they say the way we’re going to fix Covid is with a vaccine, I’m extremely cautious,” he said. “That’s the mark of the beast. They want to put chips inside of us, they want to do all kinds of things, to make it where we can’t cross the gates of heaven. I’m sorry when I say they, the humans that have the Devil inside them. And the sad thing is that, the saddest thing is that we all won’t make it to heaven, that there’ll be some of us that do not make it. Next question.”

— He doesn’t think former Vice President Biden is “special.” Denying that his headline-grabbing tweet announcing his supposed run is a smoke screen to help re-elect Trump, West said, “I’m not saying Trump’s in my way, he may be a part of my way. And Joe Biden? Like come on man, please. You know? Obama’s special. Trump’s special. We say Kanye West is special. America needs special people that lead. Bill Clinton? Special. Joe Biden’s not special.”

— Unlike his former political ally Trump, who spent he weekend posting racist tweets referring to the “China virus,” West doesn’t blame China for the spread of COVID-19. “When I become president—let me make some promises—the NBA will open all the way back up from Nigeria to Nanchang and the world will see the greatest athletes play,” he promised. “The world will experience the change in their element. The money is gonna come back. I love China. I love China. It’s not China’s fault that disease. It’s not the Chinese people’s fault. They’re God’s people also. I love China. It changed my life. It changed my perspective, it gave me such a wide perspective. My mom as an English professor taught English in China when I was in 5th grade.”

— West wants to “reinstate” prayer in schools, believing that murder, suicide and drug abuse are the result of taking God out of education. “Reinstate in God’s state, in God’s country, the fear and love of God in all schools and organizations and you chill the fear and love of everything else,” he said. “So that was a plan by the Devil to have our kids committing suicide at an all-time high by removing God to have murders in Chicago at an all-time high because the human beings working for the Devil removed God and prayer from the schools. That means more drugs, more murders, more suicide.”

— While most politicians develop detailed policy points when they announce their presidential runs, West is determined to do things his way. “I don’t know if I would use the word policy for the way I would approach things,” he said. “I don’t have a policy when I went to Nike and designed Yeezy and went to Louis and designed a Louis Vuitton at the same time. It wasn’t a policy, it was a design. We need to innovate the design to be able to free the mind at this time.”

— West believes in the Wakanda management model for the U.S., referring to the fictional Black utopia in Black Panther. “A lot of Africans do not like the movie [Black Panther] and representation of themselves in… Wakanda. But I’m gonna use the framework of Wakanda right now because it’s the best explanation of what our design group is going to feel like in the White House,” he said. “That is a positive idea: you got Kanye West, one of the most powerful humans—I’m not saying the most because you got a lot of alien level superpowers and it’s only collectively that we can set it free. Let’s get back to Wakanda… like in the movie in Wakanda when the king went to visit that lead scientist to have the shoes wrap around her shoes. Just the amount of innovation that can happen, the amount of innovation in medicine—like big pharma—we are going to work, innovate, together.”

— Though he has no real thoughts on such pressing issues as taxes, among West’s priorities are: “Clean up the chemicals. In our deodorant, in our toothpaste, there are chemicals that affect our ability to be of service to God.”