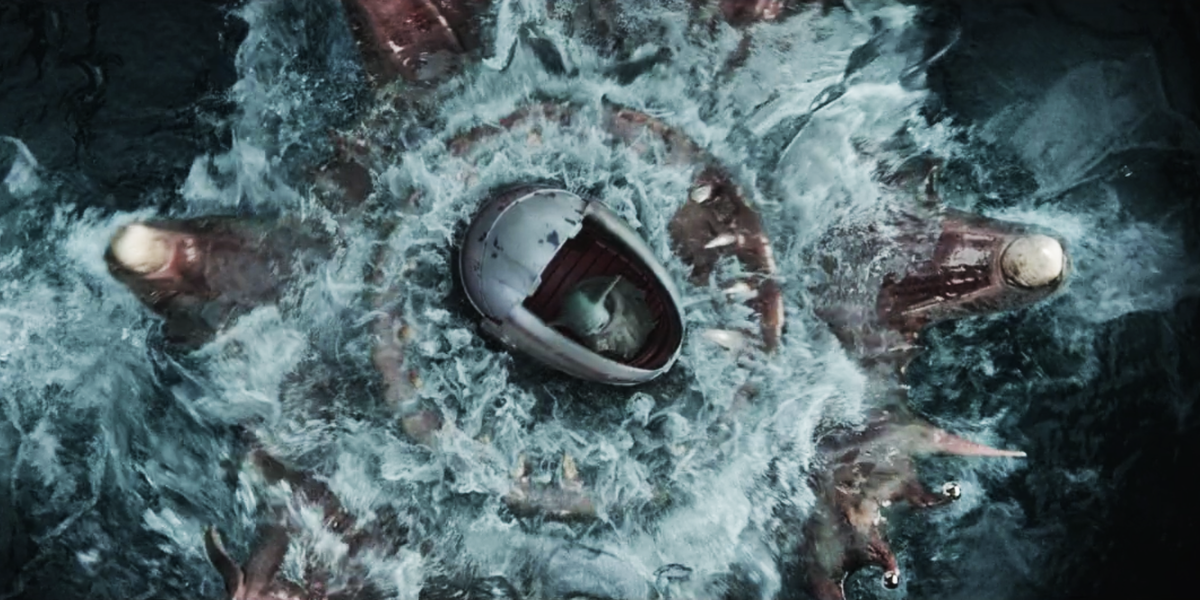 “Chapter 11: The Heiress” is the most exciting and important episode of Season 2 by almost every measure.

Directed by Bryce Dallas Howard and written by show creator Jon Favreau, Episode 3 goes all in with the action, set design, and story revelations.

If you’ve even glanced at the coverage of this episode, you know it delivers what many fans consider one of the biggest moments in the series’ history: the first ever live action appearance of Bo-Katan Kryze (from the animated series Star Wars: The Clone Wars and Star Wars: Rebels).

While it was confirmed back in May that Katie Sackhoff was slated to appear this season as the Bo-Katan, fans were left to speculate when and how the character would be introduced. Some even theorized her character had died in universe, after seeing her prized Darksaber in the hands of Moff Gideon at the end of the last season.

Katie Sackoff, of Battlestar Galactica fame, is no stranger to Bo-Katan. She had been voicing the animated version character since 2012 in Season 4 of Star Wars: The Clone Wars, making this a particularly exciting casting choice. As Entertainment Weekly stated: “a live-action character later voicing an animated version is common, but far less so for the originator of an animated character to carry over to live action.”

Sackoff is not only the perfect voice for Bo-Katan; she even looks just like the character’s animated counterpart.

In addition to appearing in the episode, Bo-Katan also namedrops Ahsoka Tano. That inclusion, along with the return of Boba Fett in Chapter 9 makes it clear that, going forward, The Mandalorian will be deeply intertwined with the stories of other Star Wars media and cease to be a standalone adventure.

“The Heiress” picks up with our second favorite bounty hunter Din Djarin (AKA “Mando,” played by Pedro Pascal), Baby Yoda, and Frog Lady reaching the water moon of Trask. Din’s ship is heavily damaged from the last episode and narrowly avoids crash landing on a pier, just to fall over in the ocean.

The ship is pulled from the ocean by what appears to be a crane made from reappropriated Imperial class AT-AT parts. This set piece – Trask’s industrial, seaside shipping docks – is one of the most detailed and interesting ever explored on the show.

Razor Crest being lifted from the Trask sea

Din leaves the Razor Crest with a Mon Calamari dock worker for repairs and Frog Lady is reunited with her husband. The frog couple are cute, even though we know Frog Man is mostly hype to fertilize those eggs she’s been carrying around.

Koska Reeves, a new character played by Sasha Banks, is spotted watching Din in secret. Frog Lady’s husband leads Din to a local food spot to seek out information about other Mandalorians on Trask. Meanwhile, Baby Yoda learns not to play with his food.

An alien approaches Mando and says he can bring him to the Mandalorians–For a price. Mando and Baby Yoda join him on a fishing ship but quickly learn the alien just wants to kill them and take their valuable beskar.

Baby Yoda is swallowed up by an eel monster and Mando dives in to save him.

Both of them appear to be screwed until Bo-Katan and her Power Ranger crew rock up out of nowhere and kill everyone. Mando is like, “What’s up, I’m a Ranger too.” But then Bo and crew take off their helmets, and Mando is like, “Hey, you’re not real Power Rangers!”

It turns out Din is actually an unwitting member of the Children of the Watch, an outcast group of Mandalorians Bo-Katan describes as “a cult of religious zealots that broke away from Mandalorian society.”

Bo-Katan Kryze is actually in line for the throne of Mandalore, so she knows way more about Din’s people than he does. All of this poses a major challenge to Din’s core beliefs and values. He doesn’t seem ready to fully grapple with the revelation, but it’s certain we will be exploring his extremist upbringing and limited worldview more as the series progresses.

It seems as though the cult that saved Mando as a child have been Mand-splaning to him what it means to be a Mandalorian ever since.

Mando explains that he needs to find the Jedi, and Bo-Katan agrees to help if he will assist them on a mission to hijack an Imperial freighter carrying loads of weapons. He reluctantly agrees to join them on the mission, and they soon find themselves in a high-stakes standoff with Storm Troopers.

The Power Rangers successfully commandeer the Imperial freighter and set course for Moff Gideon and the Darksaber. Mando rejects an offer to join them, choosing instead to return to Baby Yoda and his search for Jedi.

Bo-Katan tells him: “Take the foundling to the city of Calodan on the forest planet of Corvus. There you will find Ahsoka Tano.”

Our heroes will not reach Ahsoka Tano (confirmed to be played by Rosario Dawson) in Chapter 12. A live action Ahsoka is probably the strongest punch this season is packing. Showrunners and executive producers Jon Favreau and Dave Filoni want to tease it out.

In an eight-episode season, we think Ahsoka will be saved for Episode 5, or possibly even Episode 6 with Robert Rodriguez directing. Fans were dying to see her in The Rise of Skywalker (2019), which would have been her first live action appearance in a Star Wars movie. But since they only got a her voice, we will have to take the streaming service version.

What, or who, will our friends encounter in the next episode of The Mandalorian?

Chapter 12 will probably be another side quest episode, similar to the fourth installment of Season 1, “Sanctuary.” We met Cara Dune in that episode, and we think it’s high time for her return. We already know Gina Carano is confirmed for season 2, expected to return with an updated outfit as “Marshall Cara Dune.”

We know Din’s ship, “Razor Crest,” is barely working at this point. Perhaps Mando, realizing his ship won’t survive the trip to Calodan reaches out to Cara to hitch a ride. It would also make sense that he would want back up on his quest, given the Jedi are ancient enemies of Mandalorians.

It’s also possible that Boba Fett will make another appearance, perhaps intercepting Mando to take back his iconic armor.

Finally, we predict Baby Yoda will finally use the force in the next episode. So far he has been relegated to cooing and eating things this season. For a character that came out the gates swinging (and choking people) with the force in Season 1, we’re expecting Baby Yoda to do something big, now that he is well fed.

The Mandalorian Season 2, Episode 4 streams to the outer reaches of the galaxy Friday (3:00 AM, EST), November 20th on Disney+.

Do you agree with our The Mandalorian review? Let us know about your thoughts on Twitter, @Popdust!