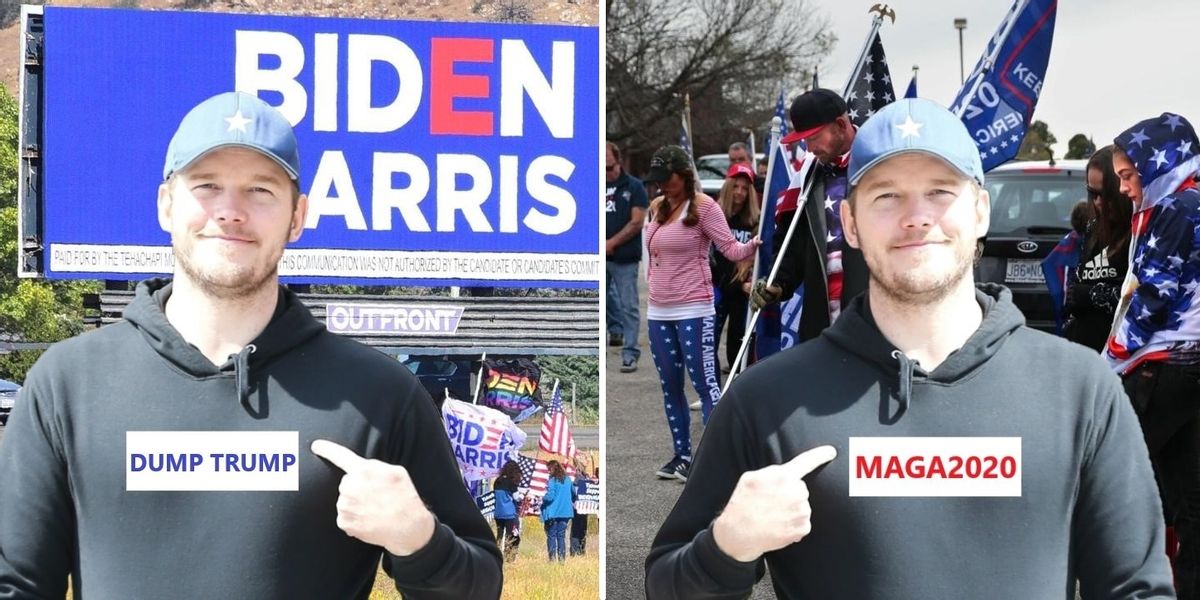 This is an incredibly consequential time in American history.

With less than two weeks left until the 2020 presidential election, the future of the nation hangs in the balance, and it all hinges on one essential question: Which side is Chris Pratt on?

Chris Pratt, AKA Peter Quill, AKA Andy Dwyer, AKA that guy from Jurassic World with the pet velociraptors has yet to publicly announce his political affiliation. As a result, the nation apart as we all try to make sense of how we’re even supposed to have a democracy if a popular actor won’t take a stance.

Chris Pratt first came to America’s attention in 2009 for his role in NBC’s Parks & Recreation, which followed local government and politics in a small town in Indiana. And it was there that Pratt first launched his apolitical rein of terror.

While many of the show’s cast of characters took clear political stances on issues from same-sex marriage to public health taxes to the idea that all government regulation is an infringement on fundamental liberty, Pratt’s character, Andy Dwyer, remained maddeningly disengaged.

What were viewers to make of this oblivious goofball who just seemed to want to play video games and make mediocre rock music with his friends? Surely he couldn’t just be an amusing man-child who has no awareness of the political issues unfolding around him. Which side is Andy Dwyer on?!

When he donned an FBI jacket as “Burt Macklin,” was that an implicit endorsement of the FBI’s involvement in the death of Black radical Fred Hampton? When he literally ran away from his medical bills, was that indictment of America’s overpriced private healthcare system? Or when “Johnny Karate” sent a horde of tiny ninjas to attack “Mailman Barry,” was that really a precursor to Donald Trump’s attacks on the post office? What is Chris Pratt hiding?!

Since that time, Pratt has been elevated to the status of an A-list celebrity by his role as Star-Lord in the Guardians of the Galaxy movies, and for racing some dinosaurs on a motorcycle. As Star-Lord—real name Peter Quill—Pratt achieved a total departure from his oblivious goofball image by playing an oblivious goofball with a six-pack and some cool sci-fi toys. And yet he still refuses to tell us where he stands on tort reform?!

Recently his lack of vocal political convictions has come to a head as Internet sleuths have attempted to find evidence of his true political beliefs in a joke he made about the importance of voting (for his Pixar movie Onward in the People’s Choice Awards), and in his failure to attend a fundraiser for the Biden-Harris presidential campaign—despite many of his Marvel castmates agreeing to go. In addition to attempts to “cancel” Pratt, he was recently labelled by Twitter users as the worst “Hollywood Chris,” losing out to Chris Evans, Chris Hemsworth, and Chris Pine.

Sadly, these intrepid digital gumshoes have been foiled in their efforts by the fact that the voting joke was fairly harmless and at least partially self-deprecating, and by the fact that Pratt was not invited to the Biden-Harris fundraiser as a result of being in the UK for the filming of Jurassic World: Dominion.

Still, we should be able to look at the facts of the case to determine the truth. For a start, we can look at his love life. Pratt was married for eight years to actor Anna Faris, who has described herself as a feminist, an environmentalist, and an activist, which sure sounds like a Democrat… But then the couple divorced in 2018.

Now Pratt is married to Katherine Schwarzenegger, whose father Arnold Schwarzenegger spent eight years as the Republican governor of California. But Pratt’s new mother-in-law, Maria Shriver—niece of JFK and Robert Kennedy—is a member of the Kennedy dynasty of Democratic politicians, and Katherine Schwarzenegger herself recently endorsed Joe Biden and Kamala Harris, even expressing an inability to understand how people continue to support Trump. Still, Pratt eludes us. We must dig deeper.

Pratt is a devout Christian, and a member of Zoe Church in LA, which is—at least according Ellen Page—”infamously anti-LGBTQ” but while the church’s stance on issues such as gay marriage are not entirely clear, with founder Chad Veach saying that his church “is not the place for a political agenda”…while also funding an indie-Christian film that addressed same-sex attraction in the context of “sexual brokenness.”

Then again, Veach’s views do not necessarily equate to Chris Pratt’s. In his response to Ellen Page’s criticism last year, he said, “No church defines me or my life and I am not spokesman for any church or any group of people,” adding that “hate has no place in my or this world.” The mystery remains.

Some have speculated that Pratt has avoided offering any political views in order to make himself more marketable by not alienating one portion of the public or the other, but considering the backlash he’s been getting for not speaking out, that may not be accurate. So is it possible that he’s just… not political?

You all, @prattprattpratt is as solid a man there is. I know him personally, and instead of casting aspersions, loo… https://t.co/30E9gZUaWF

That seems like an absurd prospect in the Trump era–when the country feels more divided than ever into distinct political camps–but as shocking as it may be, there are still people who prefer not to hurt themselves by paying attention to the infuriating issues of the day and forming serious opinions—occupying themselves instead with arcane interests like “music,” “art,” and “religion.”

Is it better to pay attention to the awful things that our government does to its people and to use whatever platform we have to support efforts to improve the lives of the powerless and disenfranchised? Undoubtedly, yes.

But it’s also not a crime to find that process too personally overwhelming, alienating, or depressing. It’s not a crime to disengage, or to joke about the dire, life-or-death importance of voting (although, seriously…it’s kind of life-or-death)—even if you’re famous. And while we might love to think that all the apolitical people in our lives can be encouraged to join righteous political causes… bullying them into doing so probably isn’t the way to make that happen.

So while it’s still possible that Chris Pratt is an evil fascist who just plays a sweet, harmless guy in his personal life and on TV, until he announces that he loves Donald Trump or hates Black Lives Matter, maybe we can work from the assumption that he really is kind of an oblivious goofball who probably doesn’t like Trump, but also doesn’t pay that much attention to politics.

Maybe we can focus our energy and our rage on people we know oppose our interests, and stop acting like the fate of American democracy depends on exposing the views of Chris Pratt. Seriously, who cares?