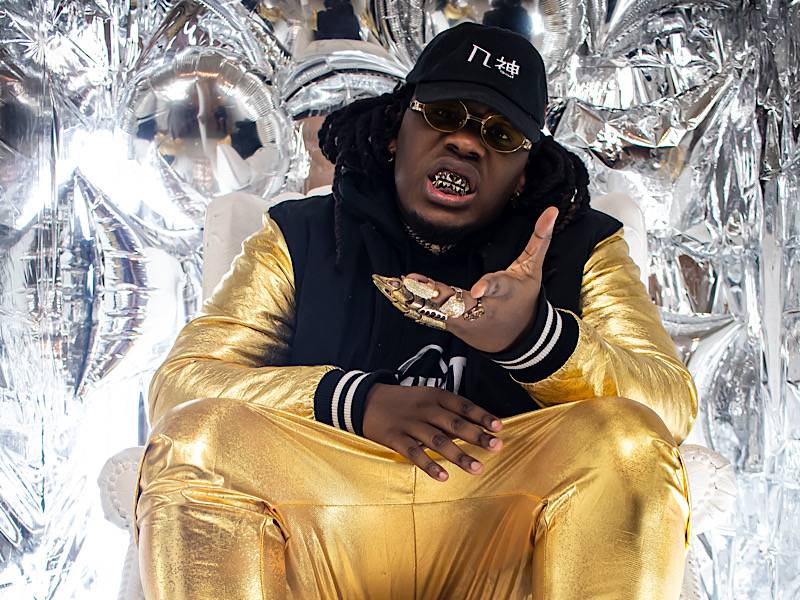 St. Louis, MO – The early success of many notable teams and collectives in the industry was (more often than not) attributed to the breakout of one individual member who then brought the rest of the squad into the situation.

This scenario is proving to be especially true for the RSF crew, a collective of artists representing St. Louis’ Pi Town — a name that cleverly represents both the 314 area code in the Wellston area of their city and Pi in the mathematical sense (3.14).

The crew’s most successful member to date — EJ Carter — has had more than a few lucky breaks since his debut album, 2015’s Notorious. Though he had managed to amass millions of spins organically, it was his 2018 LP 5800 that put him on the map, and under the wing of Houston legend Lil Flip (with whom he recorded the 2019 collaborative LP H Town to Pi Town).

He is now using the momentum to help put the spotlight on the artists and creatives that he came up with over the years. As he tells it, it’s all about the family (both literally and figuratively speaking).

“This is a family affair for the most part,” Carter tells GroovyTracks. “I met Beatsheik and B. Roye in elementary school, where we became brothers … Ovadose Beatz is my cousin, and we met Miss Alley Cat at the show. She battled me right off the bat outside the venue.”

He adds, “My older brother Vido Casino is the one who developed me as an artist and helped me start this whole movement in the first place. If this was Cash Money, and I was Birdman, he’d be Slim,” he states with a laugh.

Everyone else behind the scenes — handling every facet of everything the crew does — is directly related to Carter. “We are pretty much a family business at this point,” he says.

Being just below the cusp and being from St. Louis, it’s easy to make a correlation between EJ’s squad and one of the region’s most globally recognized exports — though he says they are hoping to shed light on a darker sound.

“We kinda have a Nelly and the St. Lunatics type of feel, where I’m Nelly, and they are the ‘Tics, with a Wu-Tang Clan type of structure, since I tend to function like the RZA,” he explains.

In contrast, Carter’s squad is slightly more musically self-sufficient — right down to the engineering.

“B. Roye is a rapper’s rapper if you will. Miss Alley Cat is a bonafide star from a battle rap background but can make great songs. Simply Chris is an energetic artist that can often fit into the vein of backpack rap,” he says, breaking down the crew.

“Beatsheik is more of a producer and engineer, and he has become paramount to the construction of what we call the ‘Pi Town Sound,’” he explains. “Ovadose Beatz is a producer and engineer that brings energy and helped us to form our signature sound. He is also the main videographer that shoots all our videos.”

Carter describes himself as the glue, having been the one who (to date) has seen the most individual traction. 2019 saw him building up his profile following the viral success of his single “Propane,” — which initially put him on Lil Flip’s radar. 2020 is looking to be a real breakout.

“I plan to drop my next album Birth of the Pi God around Spring/Summer,” he says. “It will feature everyone on my team as well as guest appearances from Project Pat, Big Tuck and Lil Flip. I also will be releasing more music videos me and Flip’s tape H Town to Pi Town … I’m trying to bridge that gap between us and the majors this year man.

“I’m ready man — more ready than I’ve ever been. Toured with legends, made legendary moves, and this is only the beginning,” he adds.

While new music is in the works, the collective is currently promoting their latest project, RSF The Regime, Vol. 1 — a project Carter hoped would not only show what the squad brings to the table but also what “Pi Town” is all about.

“We are creating our world … our atmosphere, our plane of existence within what people know as St. Louis,” he says.

Ultimately, Carter says he sees the collective growing into more of a TDE in the industry, with the individual components having successful careers and coming together to do massive tours.

“The St. Louis music scene is burgeoning right now. There is a multitude of artists coming out of the Pi Town and making serious moves. I feel like the eyes of the industry are slowly shifting [back] onto St. Louis,” he says. “We are right there, next up comin’ from the fuckin’ underground.”

Stream RSF The Regime, Vol. 1, below.