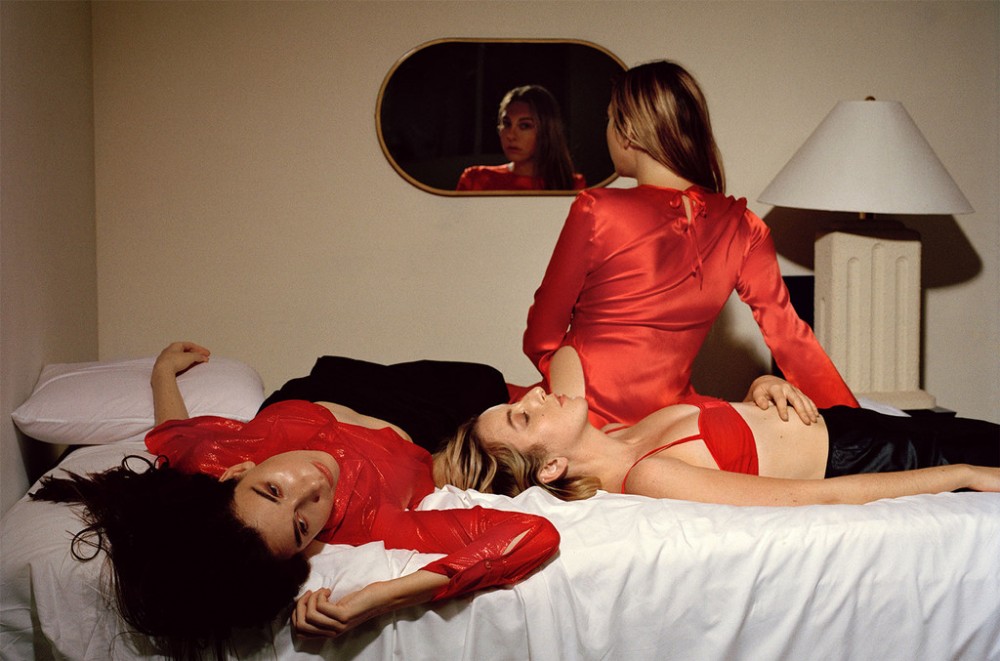 Since the Haim sisters went into self-quarantine in mid-March — in their separate but very close Los Angeles homes — the youngest, Alana, has been craving the bar and bat mitzvah circuit.

“I’ve been very nostalgic for my 7th grade year,” she says over Zoom, sitting in between Danielle and Este. “I have never partied harder than that year.”

It makes sense that, after nearly three months of isolation — during which Alana admittedly bought inflatable guitars and has been playing a lot of Jason Derulo and Flo Rida — she’d be yearning for the days when her only priority was to “put down my Shirley Temple and get down on the dance floor” as soon as Ciara and Missy Elliott’s “1, 2 Step” came on. It’s even more understandable when you consider that she, along with her sisters, should be gearing up for a massive tour in celebration of Haim’s third album, Women In Music Pt. III (Columbia), right about now.

Since the trio’s formation over a decade ago, Haim (which first signed a recording contract in the U.K. with Polydor) has released two albums, both of which went top 10 on the Billboard 200. The sisters’ 2013 debut album, Days Are Gone, helped them secure a Grammy nod for best new artist, while sophomore album Something to Tell You landed them a slot as musical guest on Saturday Night Live. All the while, they continued to climb lineups for festivals like Coachella and Lollapalooza while speaking out about pay disparity in the industry.

Haim’s highly anticipated third album, which was announced at the beginning of March, was initially slated to arrive on April 24. But, due to the ongoing pandemic, the indie-pop/rock sister trio — who witnessed a family member’s hospitalization because of COVID-19 — pushed the date to August in hopes of being able to tour by then. Once it became clear that live music would not safely return on a large scale until 2021, they moved the date once more to this Friday, June 26. “We really did make this record with touring in mind,” says Alana.

Which isn’t to say that the new album consists solely of party-starters and crowd-pleasers: It’s the band’s most raw set, both lyrically and sonically, to date, as well as their most daring in terms of its production. This can be best heard on electrifying singles “I Know Alone” and “Now I’m in It” —  both of which touch on reclaiming power by acknowledging a depression —  as well more intimate, close-mic’ed slow-burners like lead track “Los Angeles” (which begins with an epic horn run) and single “The Steps.” (Danielle says Joni Mitchell was “a huge theme on this album,” adding that she’s been revisiting Mitchell’s jazzy 1976 LP Hejira a lot in quarantine).

The sisters have co-writing credit on all 16 tracks, and Danielle co-produced the album alongside longtime friends and collaborators Ariel Rechtshaid (also Danielle’s partner) and Rostam Batmanglij, both of whom she calls “sonically progressive” — saying they’ll even mic a guitar so that it produces a sound unlike anything else.

She says it’s clear that on this album she and her sisters are “getting better in the studio and at [executing] how we want s–t to sound,” adding that she’s always trying to learn more (though she says her home studio is “pretty bare bones”). And while she humbly admits, “I’m not an engineer, per say…” Este is quick to cut her off, “…but she really came into her own,” she says. “It was really nice, as an older sister, to see Danielle taking the reins and truly putting her stamp on this record.”

Throughout, all three sisters have a strong imprint on this album — and each reveal personal wounds that until now, have been kept covered, from Danielle’s post-tour depression (“your whole life just completely changes from being on the go, playing every night, to just nothing,” she says) to the unexpected death of Alana’s best friend, to Este’s ongoing battle with Type 1 diabetes. All these themes are packed into the heart-aching, acoustic “Hallelujah,” on which they each trade verses. Meanwhile, Danielle wrote the closing track “Summer Girl” back when Rechtshaid was first battling a testicular cancer diagnosis.

“We had so much to say, and we went through so much,” says Alana. “To open up this much on record, it took a lot of courage on our part. There are a lot of things on here that we’ve never spoken about before. Consciously, we really pushed ourselves to not be afraid.” (As Alana says this, a door mysteriously opens; the three simply shrug and chalk it up to Danielle’s home being haunted).

“We had toured the world twice and experienced a lot, but didn’t really have time to sit and go through emotions that we were having, because you’re constantly moving, constantly creating,” Alana continues. “We needed to take some time to be like, ‘Wait a minute, I need to check in with myself,’ and that’s really what this record was. It was literally us looking in the mirror and being like, ‘Hey friend, nice to meet you. We need to have a conversation.’ I needed to tap into things I was running away from for years.”

For as personal as the album is — the cover art even shows the sisters at L.A. staple Canters Deli, where they played their first show — their parents still haven’t heard it. “They always give us s–t, like ‘We’re the last people to know what’s going on! You guys never call us!’, typical parent s–t,” Alana says with an eye-roll.

Even though WIMPIII has yet to arrive, Haim reveals that with the extra time at home, they’ve revisited some old material to potentially revive — and have also explored new song ideas, too. Upon mention of this, Danielle whips out her phone to scroll through GarageBand (which Este calls a “treasure trove”) to share she’s up to 109 recordings. “There are just so many ideas,” she says. “We are feeling super creative right now.”

While the new set stands as the sisters’ most emotionally revealing album to date, they still can’t wait to take it on the road — whenever that may be. “I’m really hoping that at some point next year we can tour, and hopefully we’ll have some new stuff by then,” says Alana. “The thought of going out and touring is pushing me forward… Sweating and dancing and raging and rubbing up against people and being in a crowd — that’s really where my head is at. And though I love having time home, I’ve had enough.”

Alana also admits she never thought she would be confident enough to talk about the subjects on Women In Music Pt. III, let alone perform them to crowds of people night after night, saying, “I’m going to cry so much on tour.”

“Every time we play these songs, I get transported back to the time when I was living what we wrote,” adds Este. “I’m probably going to buy stock in Kleenex for this tour.”