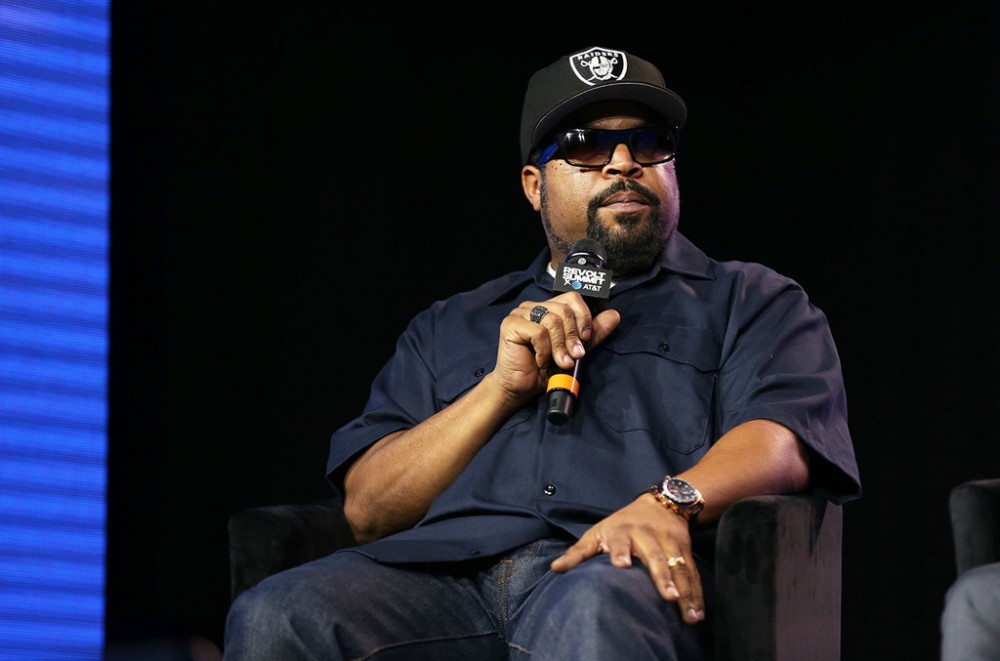 While many of his peers have been preaching messages decrying injustice and intolerance, rapper Ice Cube spent Wednesday (June 10) confoundingly posting images that appeared to amplify anti-Semitic tropes tying Jews to the oppression of black people. They also appeared to nod to debunked conspiracy theories about the noses of Egypt’s sphinxes that first surfaced as attempts to manipulate black voters in the 2016 election.

The day-long Twitter spree — which follows a Trump-level torrent of tweets over the past two weeks — featured dozens of posts kicked off with a retweet of an image of a dog defecating on a Confederate flag, before pivoting to a series of image of black cubes — including one suspended inside a five-pointed Jewish star — which are sometimes referred to as the “Black Cube of Saturn.” The Daily Beast wrote that placing the occult image inside the star “heavily implies that the Jewish people are stoking the flames” of division, while the cube has also been tied to claims that Jewish people were behind the 9/11 terror attacks and COVID-19.

While a spokesperson for the rapper, 50, had not returned Billboard‘s request for comment at press time, in response to someone leveling a charge of anti-Semitism against the him, Cube wrote, “What if I was just pro-Black? This is the truth brother. I didn’t lie on anyone. I didn’t say I was anti anybody. DONT BELIEVE THE HYPE. I’ve been telling my truth.” He also added the statement, “You know who I am and what I stand for. I believe in actual facts and I stand on the TRUTH alone. LIES GET SPIT ON” to the former.

One of the images posted last week showed men with the kind of exaggerated facial features typically associated with anti-Semitic tropes playing Monopoly on the backs of black people. The shot came from a 2012 mural that was painted on a wall in London’s Tower Hamlets neighborhood and was removed  due to its disturbing imagery.

In response to an image of slaves working in Egypt with the caption “Hebrew Israelites slaves in ancient Egypt… Clearly they are a black people,” international human rights lawyer Arsen Ostrovsky replied, “Sorry @icecube, lost all respect for you now. Was willing to give you benefit of the doubt, but no more. You cannot claim to fight racism, by employing #Antisemitism! It also only demeans the memory of #GeorgeFloyd. Shame on you!”

Acclaimed writer/professor Roxane Gay reacted to one of the Star of David posts — which was hit with a “potentially sensitive content” warning by Twitter — writing,  “It is impossible to take you seriously with regards to social justice or,.. anything when you post anti-Semitic imagery. What the f— are you doing?”

When BET news host and Temple University professor Marc Lamont Hill wrote, “Sadly, no. This is his second antisemitic post in a week. Conspiracy theories of Jewish global domination are textbook antisemitism,” Cube responded. “What if I was just pro-Black? This is the truth brother,” he said. “I didn’t lie on anyone. I didn’t say I was anti anybody. DONT BELIEVE THE HYPE. I’ve been telling my truth.”

Seemingly reacting to some of the blowback, Cube later wrote, “DON’T BELIEVE THE HYPE: THE DEVIL WILL COME AT ME (AND YOU) WITH THIS TATIC. 1)Dismiss us 2)Discredit us 3)Demonize us 4)Destroy us!!! The formula they used against Martin Luther King Jr & many others!!! Including women during the so called witch hunt!!!”

The rapper’s tweetstorm continued into Thursday morning (June 11), with posts including an image of a black stick figure spanking a white one, memes of the cartoon character Marvin the Martian, the cover of his 1998 War & Peace Vol. 1 album, a comic depicting Europe and North American stacked with gold carved out of the empty African continent and a series of comics depicting black love.

There were also doctored images of President Trump as The Joker and rapper Tekashi 6ix9ine, a post describing Cube’s anger about the messy Georgia primary this week, his reaction to NASCAR banning Confederate flags at races and a confounding response to the Grammys announcing name changes in several categories this week that included two paintings of Michael Jackson.

On Thursday morning, Cube (born O’Shea Jackson) confirmed that he was behind the posts. “This is CUBE. My account has not been hacked,” he wrote. “I speak for no organization. I only speak for the meek people of thee earth. We will not expect crumbles from your table. We have to power of almighty God backing us all over the earth. NO MORE TALKING. Repent.”

The confounding mix of posts from Cube, who recently canceled an appearance on Good Morning America because he said he was “done talking” in the wake of the killing of George Floyd by a Minneapolis police officer, also included one that alluded to the far-right, “deep state” conspiracy theory meme machine QAnon. The post has an image of the phrase “Media is complicit #treason Q,” to which Cube added, “STOP IT. I don’t know who the f–k Q is? It’s just a True statement.”

The Jewish Star tweets are not the first time Cube has been hit with charges of anti-Semitism. His 1991 diss track “No Vaseline,” which hit out at his former N.W.A. bandmates after a messy split, also contained a number of vile homophobic references and anti-Semitic slurs aimed at the group’s Jewish manager, Jerry Heller. “Get rid of that Devil real simple, put a bullet in his temple/ ‘Cause you can’t be the Ni–a 4 Life crew/ With a Jew tellin’ you what to do,” he raps after saying “‘Cause you let a Jew break up my crew.”

See some of Ice Cube’s tweets below.

What if I was just pro-Black? This is the truth brother. I didn’t lie on anyone. I didn’t say I was anti anybody. DONT BELIEVE THE HYPE. I’ve been telling my truth. https://t.co/1SnGaGacM9

You know who I am and what I stand for. I believe in actual facts and I stand on the TRUTH alone. LIES GET SPIT ON. https://t.co/JUJcsCO9PU

I will continue to keep our people motivated, informed and provide simple solutions to help solve the problems that America has caused our people. These are my acutel facts as I see it. You can take it or let it alone. https://t.co/XTKgdMp8Ud

What if I was just pro-Black? This is the truth brother. I didn’t lie on anyone. I didn’t say I was anti anybody. DONT BELIEVE THE HYPE. I’ve been telling my truth. https://t.co/1SnGaGacM9

hey, just to flag that the image of the mural you've shared is quite anti-semitic. I wrote about it here a couple of years back. I expect you hadn't clocked the connotations – but hopefully this helps. stay strong, and in solidarity x https://t.co/qTpgTaM1xy

STOP IT. I don’t know who the fuck Q is? It’s just a True statement. https://t.co/waNFLE2oYj