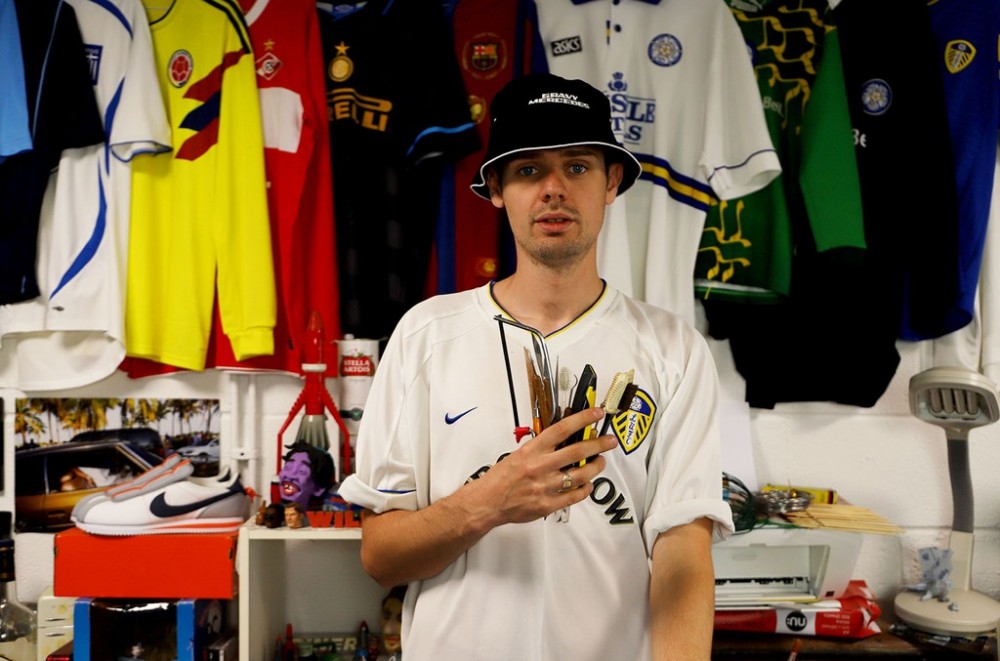 When Will Child got in trouble at school as a kid in Leeds, England, his art usually got him out of it. “I used to love doing caricatures,” he says on the phone from Bristol, where he’s lived since February after spending three years in London. “I used it as a tool to get around teachers ’cause they weren’t always that fond of me. When I had a run-in with one, I’d give them a drawing of themself.”

Little did he know that one day his art hobby, and escape tactic, would become his full-time job. Now, the 29-year-old designer is one of the go-to artists for claymation music videos, particularly among hip-hop artists.

He first caught the attention of the music community with his final school project as a graphic design major at NorthUmbria University in Newcastle in 2012; he made a short film about Pablo Escobar’s cocaine operation, but using papier-mâché puppets. “That really whet my appetite,” Child says. “I love making things with my hands and generating this world at your fingertips.”

Local blogs picked up his tweet about the Escobar film, as did artists like Skepta’s brother Jme and the rap group Verbal Contact, for whom Child made his very first music video for the song “Stoned” that summer. Eight years later, Child has worked with everyone from Atlanta rapper Key! and New Jersey’s Da$h to Partynextdoor and Trippie Redd. He’s currently working on a video for Tory Lanez’s song “Pricey and Spicy” from The New Toronto 3, which uses action figures and stars Lanez as supervillain Argentina Fargo.

Even during a pandemic, Child remains busier than ever, recently launching his new animation studio, Gravy Mercedes, named for a Cam’ron bar from the Diplomats song “I Really Mean It,” and is toying with the idea of also having it be a record label. “I’m not sure how serious it is at the moment,” he says. “I’d like to figure out some kind of cooperative label situation where those guys come up with the music side of things, and I take control of the full visual side.”

Real or not, he does have a first release that he even helped produce: a reworked version of Janis Joplin’s “Mercedes Benz” from Florida rapper Big Baby Scumbag. The song will be included on Big Baby’s June 12 mixtape, and Child describes the track as “trap with a tinge of country.” To support the song, Child is making a promo video and an animated lyric video. “It was my first dip into record producing in a very superficial way,” he says. “I’ll be P. Diddy by this time next year.”

Meyhem Lauren, Action Bronson and AG da Coroner
After graduating from college in 2012, Child moved home to Leeds and got a studio where he could work on his art in between freelancing and working at a sandwich shop. In early 2013, Queens rapper Meyhem Lauren tweeted that he was looking for an animator, so Child reached out with “feverish excitement” and won the rapper over with his Escobar project, snagging his first higher-profile music video for Meyhem, Action Bronson and AG da Coroner’s “Drug Lords.” Child was still in his pre-claymation days, so he made a live action video with papier-mâché puppets of the trio, which embarked on a drug heist, complete with gunfire and a car chase.

Da$h
At the top of 2014, Child got a graphic design job at the Leeds-based agency Golden, but quit three years later to return to freelancing and moved into a room above his now-93-year-old grandfather’s garage in London. “It was a rather strange thing to do at 26 years old,” he says now. There, he made his first-ever claymation — a model of Donald Trump vomiting the word “bigly” — and soon after, saw a call for animators on Instagram posted by the rapper Da$h’s manager, Stevie Skytel. Child sent in his Donald Trump claymation and a very detailed cardboard set of a Queens corner he’d made for a Remy Banks EP that never came out. “I’d convinced myself that I could do the set building and the model making, so it was just about trying to convince someone else I could do it,” he says. He got the gig for the song “As If You Ain’t Know,” and after three months of work, the video dropped in November 2017, becoming his debut as a claymation music video artist. “That’s the launch point in my mind. That’s my rebirth,” he jokes. “That was the genesis of what I’m doing today.”

Trippie Redd
By 2019, Child had added videos for Key!, Father, and 03 Greedo and Kenny Beats to his resume, which caught the eyes of Aidan Cullen and Jimmy Regular, co-founders of the production company Clocked Inc. That fall, they reached out to Child about working on a video for Trippie Redd’s “The Grinch,” which came with a tight, four-week turnaround. “[Claymation is] so time-consuming,” he says. “It’s very labor intensive. You’ve obviously got to make everything, and then just to make a second of footage, I shoot anywhere from 12 to 24 frames.” Luckily, Child says, it was a short song. He handed over the video in person when he went on a trip to L.A., and the team liked it so much that they brought him back for another Trippie Redd project, the video for “YELL OH” with Young Thug, which dropped this April.

Partynextdoor and Drake
During that same trip to L.A. last year, Child met with Partynextdoor’s manager, Tyler Henry. The two hit it off, and Henry asked Child to make a claymation video for Party’s song “Loyal,” which features Drake, though the video does not. “Drake’s not in the video because it was kind of impossible to get in touch with him and get him to sign off on having his likeness in the video,” Child says. “So we lost a few weeks there.” Work started in earnest in mid-December, and though the project came with yet another four-week deadline, the late nights paid off: The video, which features Party befriending giant bikini-clad women who are terrorizing Toronto, has more than 6 million views since it came out in January