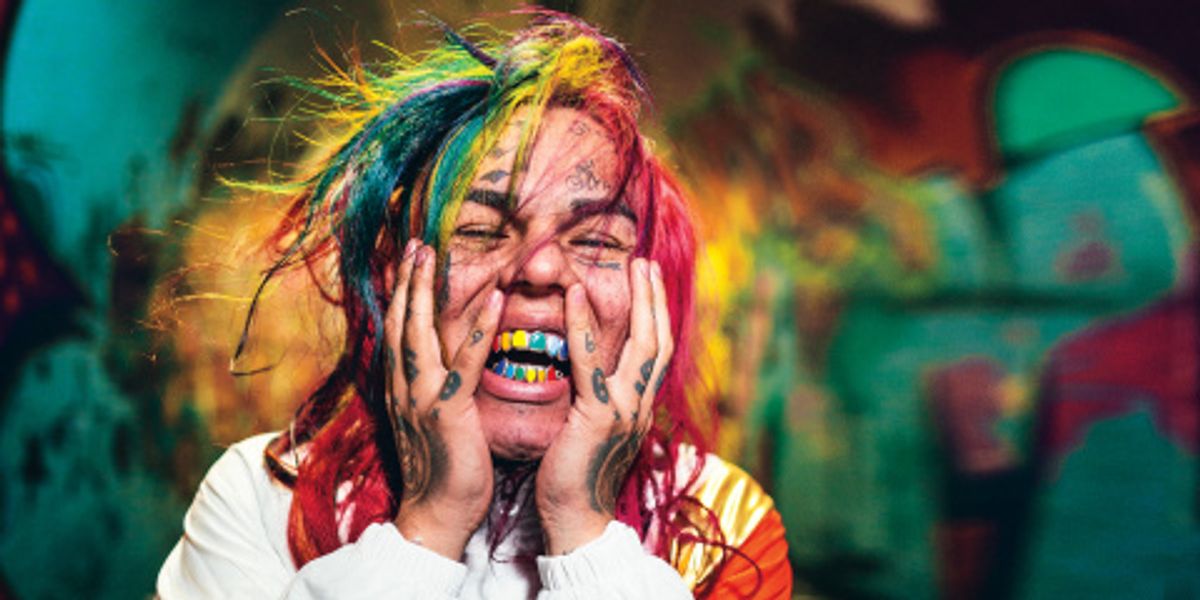 Tekashi69, AKA 6ix9ine, is one of the most controversial figures in Hip-Hop.

The Brooklyn rapper took the world by storm back in 2017 with his video “GUMMO.” Everyone took notice of his rainbow hair and the mob of red bandanas that signified his gang affiliation with the Nine Trey Bloods. The video would go viral and give birth to rap’s newest villain.

Tekashi’s brash personality would prove to be his strongest appeal. His outlandish antics on social media showed he was in favor of anything that would bring him attention. His desire to troll would land him in various beefs with rappers on an almost daily basis. But despite his volatile behavior, he became one of the most talked about figures in music.

However, Tekashi’s fall seemed to happen as rapidly as his rise. Almost one year after “GUMMO” made him a star, 6ix9ine and other members of the Nine Trey Bloods were arrested on charges that included racketeering, weapon possession, and conspiracy to commit murder. 6ix9ine would cooperate with authorities for a less harsh sentence.

During the trial, Tekashi would admit that his gangster persona was all an act to promote his music. The defense made the case that he was just a kid who got mixed in with the wrong crowd. But a new documentary from filmmaker Vikram Gandhi portrays him as a willing participant in his self-destruction.

On November 16, 69: The Saga of Danny Hernandez premiered on Hulu. The documentary delves deep into the circumstances that led to 6ix9ine becoming the rainbow-haired menace to society that we know him as today.

Before transforming into 6ix9ine, Daniel Hernandez Jr. was a timid yet playful kid who grew up in a bad neighborhood but didn’t give any indication of being a product of his environment. He worked at the local bodega and had an interest in fashion and music.

He would connect with a collective of local musicians and discover the power of social media. But it would be the death of his stepfather that would ignite his desire for fame and fortune at any cost.

The documentary does a great job of showing Hernandez’s growing addiction to likes and engagement. The more comments and reactions he received, the more he would do to make sure they kept coming. 6ix9ine’s focus was on garnering attention rather than perfecting his craft as a rapper.

Testimonies from those close to Hernandez noticed his growing desire for the spotlight. His eventual alliance with the Nine Trey Bloods was shocking. But Hernandez knew that joining the gang would not only enhance his street credibility but his overall visibility.

With protection from one of the most dangerous gangs in New York City, 6ix9ine was unleashed. He became emboldened by the Nine Treys’ methods of dealing with opposition. Hernandez felt that he was now untouchable.

His newfound invincibility took his trolling to a more dangerous level. 6ix9ine would adopt the gang’s violent temperament when antagonizing the rappers with whom he had issues. His need to get under their skin resulted in life-or-death altercations like the hit he placed on Chicago rapper Chief Keef at the height of their beef.

Hernandez’s fixation on fame didn’t come to an end after his arrest. Tekashi was released from prison in April and seemed to pick up right where he left off. One would assume after helping to place his fellow co-conspirators behind bars that he would maintain a low profile. But 6ix9ine felt more indestructible than ever and used his status as a snitch to agitate those who took issue with his breaking street code.

69: The Saga of Danny Hernandez tells two stories: One story is about a regular kid looking to escape poverty through creative expression and who becomes lost in the character he creates. The other is about a sociopath who cannot function unless he’s the topic of discussion.

6ix9ine himself doesn’t appear in the documentary. However, the talk surrounding it will undoubtedly feed his addiction to the attention he so desperately craves.