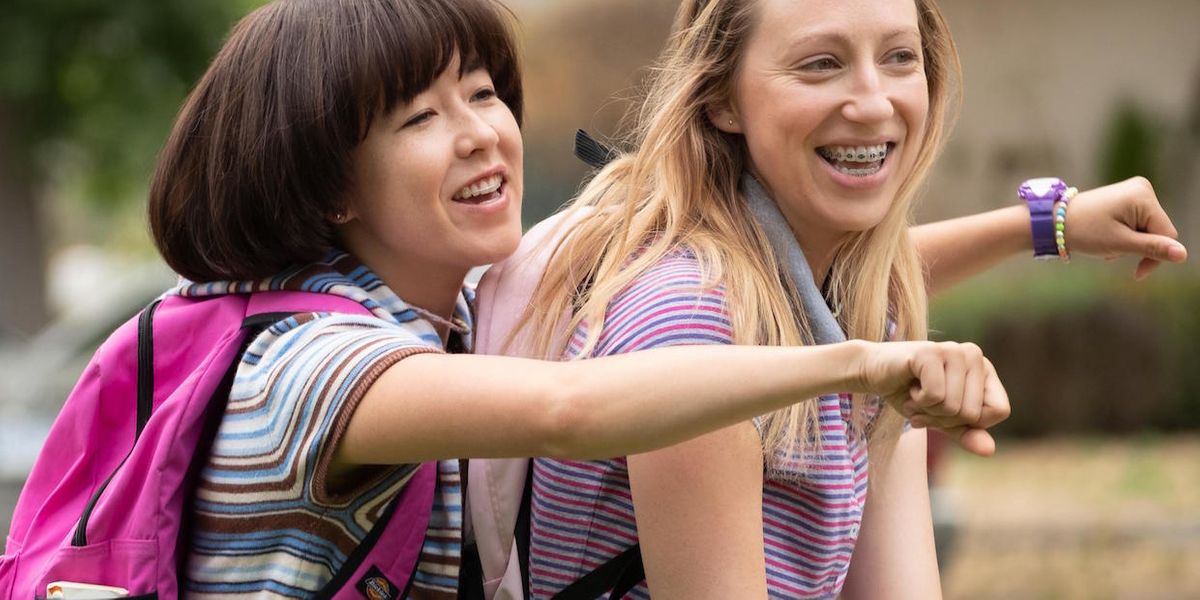 The cringe-comedy series premiered on Hulu in February 2019 to universally positive acclaim, receiving an Emmy nomination and a “Certified Fresh” rating on Rotten Tomatoes. It stars real-life best friends Maya Erskine and Anna Konkle as fictionalized versions of their 13-year-old selves, navigating the tumults of middle school alongside an impressive cast of actual middle schoolers. The second season of PEN15 only further affirms its status as arguably the most important sitcom in production right now.

PEN15‘s tagline is “Middle school as it actually happened,” which couldn’t be more true. Its first season tackles widely-discussed topics like puberty, crushes, and stranger danger online, but the NSFW show is coded with deeper issues that few shows have covered so eloquently: Maya must reckon with the implications of her Japanese-American identity, while only-child Anna endures the guilt inflicted by her parents’ divorce. PEN15 is hysterically funny, loaded with side-splitting one-liners and flawless delivery. But it’s also painful to watch at times, because it’s so precisely relatable.

In season two, Maya and Anna return to school after summer break to start eighth grade. During P.E. one day, a classmate named Jenna confronts the friends about an encounter at their last school dance, where Maya’s crush Brandt felt her up in the janitor’s closet; Anna was in the closet, too, for moral support. An awkward encounter that was meant to be a secret naturally entered the public consciousness by word of mouth. “What makes me really sad is that you’ve changed,” Jenna tells Maya and Anna. “A lot.”

Maya and Anna spend the rest of the day and the next few episodes hopelessly reeling in their new status as “desperate sluts.” Brandt seemingly pays it no mind; he’s still a part of the cool crowd at school and the most coveted member of the wrestling team. Maya obsessively tries to earn Brandt’s attention, having been led to believe that he’s interested in her. However, Brandt angrily tells Maya to leave him alone and resists even acknowledging that the closet incident happened—even though he, of course, initiated it.

Though it’s hilarious to watch Maya fumble her flirtatious attempts with the aloof Brandt, this first plotline of PEN15‘s second season strikes a nerve in female viewers. The show emphasizes the notion that, from the very first moments we start to come into our own sexuality, our bodies exist only in the context of what’s convenient for men. And the double standard here is evident: Jenna tells Maya and Anna that everyone has been talking about them, while Brandt’s friends give him the benefit of the doubt that he’d never touch someone so painfully uncool.

In the following episode, Maya goes the extra mile to win Brandt’s attention by joining the wrestling team, with Anna also joining in solidarity. After a glorious montage of the girls lifting weights and eating raw eggs in hopes to achieve a higher weight class, Maya goes up in a practice match against a boy named Sam, who had previously confessed his crush on her at the dance. Sam lets it slip that he, Brandt, and their teammates have coined a new nickname for Maya and Anna: the B.S.B.s, or “Big Smelly Bushes.” Maya surrenders the match and dashes off to sob in the locker room.

Watching these scenes excavated memories I had growing up that I’d tried my very hardest to forget about. It’s easy to quickly place the blame on women’s razors and “feminine wash” brands for perpetuating the idea that women are either hairless and smell like flowers, or they’re repulsive. However, what’s even more dangerous is how quick boys and men are to uphold these ridiculous standards of cleanliness; they did it in 2000, they did it when I was in middle school, and grown men still do it today. Much of PEN15 harnesses this concept of male power over women and girls from a young age, which is startlingly realistic.

There are countless other plotlines in the second season of PEN15 that make it worth a watch. We see one of their male classmates begin to question his attraction to girls—or lack thereof, rather—while a later episode introduces Maura, a manipulative new “best friend” to Maya and Anna who takes the cake for the most terrifying TV villain in recent history. Furthermore, we see tidbits of Maya beginning to stand up for her racial identity, as Anna makes sense of the new normal with her parents’ split.

PEN15, especially in its new season, is not as lighthearted as its cheeky title may suggest. “We’re sl*t-shamed in the beginning and instantly start to hate ourselves, hate our vaginas and then hate women,” Erskine told The New York Times, nuances that are explored and felt deeply throughout the show.

It’s the type of show that makes its viewers, women in particular, wince in discomfort. It’s unsettling because it’s real, and it doesn’t hold back in bringing up important issues of sexism. But veiled in effortlessly sharp humor and superb onscreen chemistry between Erskine and Konkle, PEN15 is also a joy to watch. After all, if middle school is universally terrible, what better way to ease the pain than with laughter?