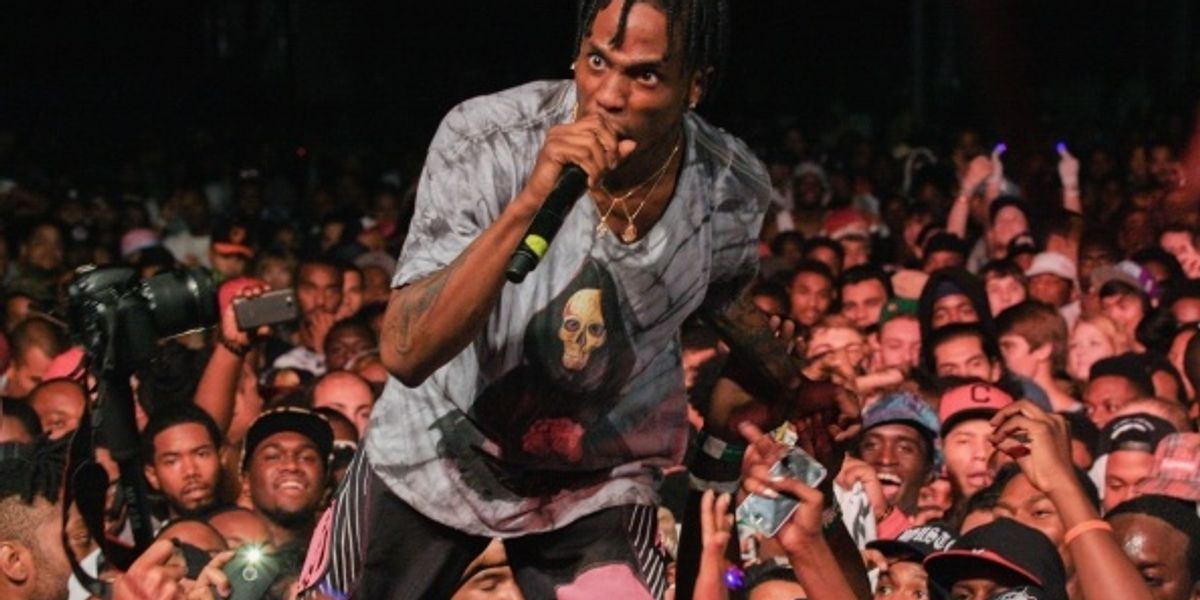 Travis Scott fans went insane across the country when the famous rapper debuted his collaborative McDonald’s meal earlier this week.

On the day of the launch, Scott arrived at Mickey D’s oldest location in Downey, California, to greet fans as they waited in line for the coveted burger–which is merely a quarter pounder with bacon, shredded lettuce, fries, and BBQ sauce. Videos show that the fans, who (mostly) wore masks but otherwise did not maintain social distancing, immediately swarmed the rapper.

Scott’s security struggled to contain the onslaught of screaming teens. But such ape sh*t behavior isn’t new for Scott fans, who have often demonstrated their love of the artist by rioting and breaking stuff. As a result of such ludicrous behavior, Scott fans have garnered meme-able infamy and are often stereotyped as dorky, simp white boys in baggy luxury brand clothing.

But Scott fans’ asinine behavior over a McDonald’s meal serves as a reminder of all the other annoying fan bases that have come to plague Hip-Hop. From the basic softies that make up Drake fans to the cult-like nature of Kanye West’s groupies, here are Hip-Hop’s most annoying fans.

“LoGiC iS tHe GrEaTeSt rApPer aLiVe” is often cited by Sir Robert Bryson Hall II’s fans, but “Rat Pack” aficionados have often mistaken the emcee’s spitfire delivery for lyrical substance. In reality, Logic has never rapped anything that groundbreaking. He is by no means a talentless hack, but his subject matter is often recycled, and the Hip-Hop community regularly clowns him as a result. He is a technically gifted emcee, with his nerdy persona and belief in universal empathy admirable (at least on the surface); but in execution, the biracial emcee often breezes over the very subject matter he prides himself on dissecting.

“Logic’s calls for civic action seem woefully ignorant to how oppression and white supremacy work,” wrote Pitchfork. “[N]ot once does he consider how being white-passing could skew his perception of what it means to be black.” His ambitions, much like his raps, are so general and grandiose that they’re callow. His fans, as a result, are usually just as naive.

The Barbz remain some of the nastiest fans in music. They stan Nicki Minaj to a toxic extent, often harassing anyone who besmirches their coveted emcee. In the past, they’ve initiated campaigns of death threats, texted disturbing messages to people’s phones, and have even tried to have the rapper’s past foes arrested. Despite Minaj’s recent onslaught of problematic behavior, the Barbz have remained steadfast in their admiration of their queen, ready to pounce at anyone who has a problem with Nicki Minaj’s duplicitous behavior.

To be fair, Eminem’s bandwagon fanbase is well-deserved. Despite the rapper’s problematic notions, he remains one of the greatest emcees of all time. But why do his fans have to be so irritatingly passionate? This question may go eternally unanswered, but his fans are annoying nonetheless. In part, his fame came thanks to his shock-and-awe tactics, many of which have aged poorly, and he’s even acknowledged that they were immature and misogynistic.

But in the eyes of Eminem devotees, anything he touches turns to gold, and refusing to hold your favorite artist to any sort of standard is undoubtedly problematic. Not to mention the phrase, “I don’t listen to rap, but I like Eminem” is one that comes up time and time again when referencing the rapper’s fanbase. In the end, that speaks volumes about a person’s tastes, considering Eminem’s pop-rap aesthetic made him one of Hip-Hop’s most commercially accessible rappers in recent years.

Another artist who is rarely held to any standard by his fans, Drake has stans who can never stop talking about how Aubrey Graham is the best at everything. Look, we understand, Drake is truly the most prolific artist of his generation, but it’s undeniable that the quality of his songs has been on a downward spiral for years. “I’m Upset” was abysmal trash, “Toosie Slide” was a vapid attempt at a TikTok track, but both tracks still charted high and went platinum. Drake fans will consume anything the man puts out, and that’s just… annoying.

Chance seems like a real stand up guy, but his music as of late has been pretty mushy gushy. Despite groundbreaking features that should have elevated the project, Chance’s debut The Big Day was one of the most disappointing efforts of 2019. The record was an exhaustive slog, and at times it was just plain corny. “Hey there, lovely sister, won’t you come home to your mister?” Chance muttered on the cringe-worthy “Let’s Go On a Run.” “I’ve got plans to hug and kiss ya, I’ve got plans to hug and hug and hug you!” Chance fans are often just as corny as The Big Day’s lyrical content. Many discovered the Chicago emcee after his Acid Rap mixtape and have kept him up on a high horse ever since.

It’s true that 2014 Forest Hills Drive is a classic. It’s true Cole went triple platinum with no features, but Cole fans refuse to let you forget the latter, and that’s annoying. The phrase “J. Cole went platinum with no features” was so abused on the internet by Cole fans between 2014-2018 that even the emcee couldn’t stand it. “I was loving it,” he told GQ. “But the second or third time, I was like, ‘All right, it’s almost embarrassing now. Like ‘All right, man, y’all gonna make me put a feature on the album just so this sh** can stop.”

Cole fans remain relentless in their worship of the rapper, so much so that his name and discography are always being discussed on Twitter in some form or another. Not to mention, fans are known to get over-the-top emotional every time Cole announces his return with a new album or single. The jokes are all in jest, but Cole’s latest efforts, both musically and otherwise, have been either dull or self-righteous. Plus, with the Noname drama far from resolved, it remains to be seen whether Cole fans have been riding the bandwagon a little too hard.

We’ve all met a Kendrick devotee at one point or another. They call him the GOAT or the new Tupac, and they present themselves as Hip-Hop purists and often appear disgruntled when shown mumble rap or anything that’s not lyrically dense. That’s not necessarily a bad thing; Kung Fu Kenny deserves all the praise and accolades he’s accumulated. But there is so much good music out there and so many other artists who are just as talented as Kendrick, with the emcee himself co-signing a bunch of them.

“Kendrick Lamar is sitting atop the hip-hop throne, but he’s no selfish ruler,” wrote XXL. If he’s able to expand his musical tastes, his fans should be able to as well.

At this moment, Kanye West fans are so problematic that they may lead to another four years of Trump. The creative genius has trivialized everything from slavery to women’s rights, and his fans still go toe-to-toe with any naysayer who says West is mentally unstable and problematic. The artist’s interviews in recent years–in which he’s often indignant about the criticisms that trail him–are filled with ramblings that are impossible to follow, but any Kanye West clansman will often brush off such critiques with a “he’s just smarter and more woke than you, and that’s why you can’t understand” excuse. The answer to that is: No. He is mentally ill, self-destructive, and should not be president.