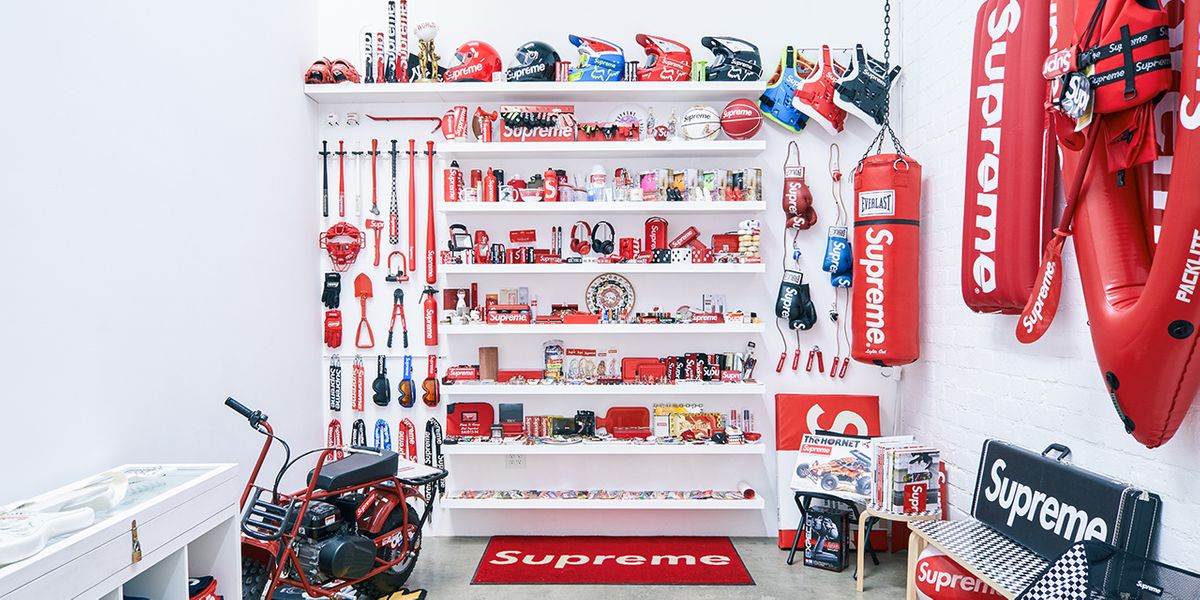 Supreme is famous for being esoteric— maybe to a fault.

Its cult-like status and devoted loyalists have drawn speculation and many attempts to pin down the brand’s appeal. What is Supreme, really? And why are all these kids lining up around the corner for a Hanes T-shirt and … a brick?

Founded in 1994 by James Jebbia, Supreme New York was a haven for skaters and Hip-Hop aficionados. While the brand is most famous for its box logo hoodies, T-shirts, and skate decks, it couldn’t have become the streetwear giant it is now if that’s all it did.

With frequent collaborations with brands like Vans and North Face (as well as lesser known labels and New York City establishments) and a new assortment of accessories with each collection, Supreme keeps its lineup diverse, and its loyal devotees keep refreshing the page.

Often, the most coveted accessories are the least utilitarian. It’s not about everyday use; it’s about saying you have whichever branded piece of memorabilia you managed to cop.

Scarcity and unapologetic strangeness are at the core of the giant’s appeal, which tailors to a young, fickle audience. And while its brand growth and recent sale to VF Corp for $2.1 Billion dollars has many people wondering if it can keep its appeal while going mainstream, Supreme has so far managed to retain its whimsical kitsch.

While I won’t claim to totally understand the psyche behind the people paying thousands of dollars for strange Supreme products, I can’t say I don’t sometimes wish I was one of them. Here are some of the weirdest Supreme items I’ve come across in the depths of eBay, Grailed and StockX.

I first started perusing the Internet for Supreme in 2013, and I remember distinctly how this Supreme Stash Box, concealed by its innocuous appearance of none other than the holy bible, made me laugh out loud.

For your paraphernalia collection or for an upgrade to your current shoebox-under-the-bed banking system, this semi-blasphemous accessory is the perfect blend of humor and utility, with the Supreme branding to match. Cop the Jesus tee and you’ll be all set. Available on eBay for up to $500.

Someone step on your sneakers? Stain your BOGO? Cop the last tee in your size? This deep cut Supreme plush is probably the most chaotic of the bunch.

Supreme is no stranger to plush toys, but they outdid themselves with this one. I’m not sure the exact science of Voodoo dolls, but my personal logic here says the more clout one has, the more powerful?

The unholy grail comes with a set of signature Supreme red pins that you can stick on points labelled “no love,” or “go broke.” or “bad trip.” It’s one of the more lowkey Supreme oddities, so it can be yours for just $44 on StockX.

Fetch! The! Bolt! Cutters! Hypebeasts might have been on this wave long before Fiona Apple was, but they each embrace an element of chaos. This is not Supreme’s only venture into branded tools. They made a full set: a hammer from 2012, a crowbar in 2015, and even a tool box in 2018.

The bolt cutters are the most esoteric to me, because who needs to keep a pair on hand? I guess if you do, they might as well be Supreme branded. I like to think that somewhere, there’s the world’s coolest handyman, pulling up with the full Supreme tool set. If that’s you, the bolt cutters are available on StockX for almost $200.

Supreme entered the 2010s strong, releasing these literal branded weapons. These Supreme nunchucks came in two colors, black and red, and recently sold as a set for $850.

These were one of the first truly strange Supreme accessories as the brand became more adventurous and ushered in a decade of whimsy. This particular accessory was also in high demand after Tyler, The Creator mentioned them in his song, “She ft. Frank Ocean” — a perfect marriage of the niche, the elusive, and the very, very strange.

It’s hard to find them in good condition, as I imagine everyone who managed to get their hands on a pair tested out their skills— to poor results.

The most strange Supreme items are the perishables — not the ones you barely have use for, but the ones you could use every day. But should you?

Supreme’s collaboration with Colgate is one of those. This upcoming Fall 2020 release could have its place on your bookshelf, your mantle, or your bathroom sink. If you spend this much for toothpaste, should you use it? Or should you keep it? You can’t have your Supreme toothpaste and brush your teeth, too, it seems.

Another perishable Supreme collaboration, these bright red Supreme Oreos lit the internet alight earlier this year. Despite claiming that Supreme had gone too far, the 3-pack of Oreos inevitably sold out in minutes online.

But the chaos didn’t end there. Bidding sites were on fire, with one auction reaching almost $92,000 before being taken down. And apparently, they just tasted like regular Oreos.

This is it. This is the one. The piece of Supreme memorabilia that haunts my dreams.

As a senior in high school when this dropped in 2016, I made a Go-Fund me page asking my peers to help me raise money for the Supreme Brick, which at that point was worth over $1,000 resale. I’ve only seen one with my own eyes, given presumably as a gift to another Lafayette St establishment in New York.

In my dreams, I live in a house made of Supreme bricks. People have done the math on this (according to a Reddit user, it’s over 4.7m), so I’m not the only one. And there is no reason. But there’s something about that logo— and always wanting what you know you can’t have.