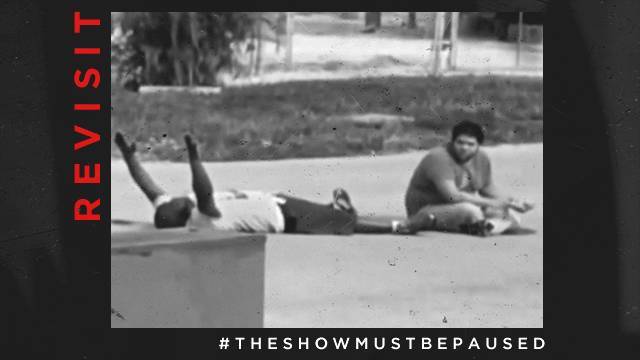 Miami, FL – Yet another police shooting has the Hip Hop community crying foul.

Charles Kinsey was reportedly shot in the leg by police in Miami on Monday (July 18) while lying on the ground with his hands in the air. Kinsey is a behavioral therapist who was supervising an autistic man. Police arrived at the location after receiving a report that a man had a gun and was threatening suicide, according to WSVN.

North Miami Police Department held a press conference Thursday to address the shooting, saying no gun was found on the scene. The Florida Department of Law Enforcement has taken over the investigation and the state attorney’s office is also looking into the case.

“Bringing in an outside agency shows our commitment to transparency and objectivity in a very sensitive matter,” Chief Gary C. Eugene says.

The moments before the shot was fired were captured on video. Kinsey is shown lying on the ground with his hands in the air next to a man sitting cross-legged with an item at his feet.

“All he has is a toy truck, a toy truck. I’m a behavior therapist at a group home,” Kinsey can be heard saying to the officers.

He says that he told the officers he was unarmed and really did not think his life was in danger, but was more concerned about his patient.

The actual shooting is not captured in the video, but Kinsey insists he had his hands up the entire time. The officers came up to Kinsey after shooting him, patted him down and handcuffed him.

Kinsey’s lawyer, Hilton Napoleon, expresses frustration with how his client was treated.

“There’s no justification for shooting an unarmed person who’s talking to you and telling you that they don’t have a gun and they’re a mental health counselor,” he says.

“My life flashed right in front of me,” Kinsey says of the shooting. “When he hit me, the first thing I’m thinking, I’m thinking about my family.”

Kinsey’s wife was at Jackson Memorial Hospital with him at the time of the interview.

Many took to Twitter to express their outrage at the incident.

This comes weeks after video of Alton Sterling and Philando Castile were shot and killed by police in Baton Rouge, Louisiana and Falcon Heights, Minnesota respectively. Many celebrities came together to create the #23Ways film documenting the lives of 23 Black men and women who lost their lives to senseless violence.

This is the shit that keeps my mother up at night #CharlesKinsey https://t.co/XF9wkW8f4Z

I don't know what to do now… Lay on the ground w my arms up, reach for ID, sit still, help the autistic hell idk https://t.co/Fe763tdjwp

So is this #CharlesKinsey silence the "he's no angel" portion of the game? Where y'all check his 8th school reports & his driving records?

Kinsey: 'why did you shoot me?'
Officer: 'i dont know'#charleskinseyhttps://t.co/HAssan4Bhg

the man in Miami asked that fuckboy officer why did you shoot me…cops says, "I Don't Know…" WTF! #blacklivesmatter yo…man smh

"If he didn't exist he wouldn't have been shot."

"If he only used invisibility cloak he wouldn't have been shot." https://t.co/HzAGNdCduU

Lays on the ground.
Puts his hands in the air.
Explains he's a therapist helping a patient.
Still gets shot. https://t.co/12bByurIyJ

"unarmed, laying on the ground, hands up and they still shot me" – #CharlesKinsey. "but did you die?" – #AllLivesMatter