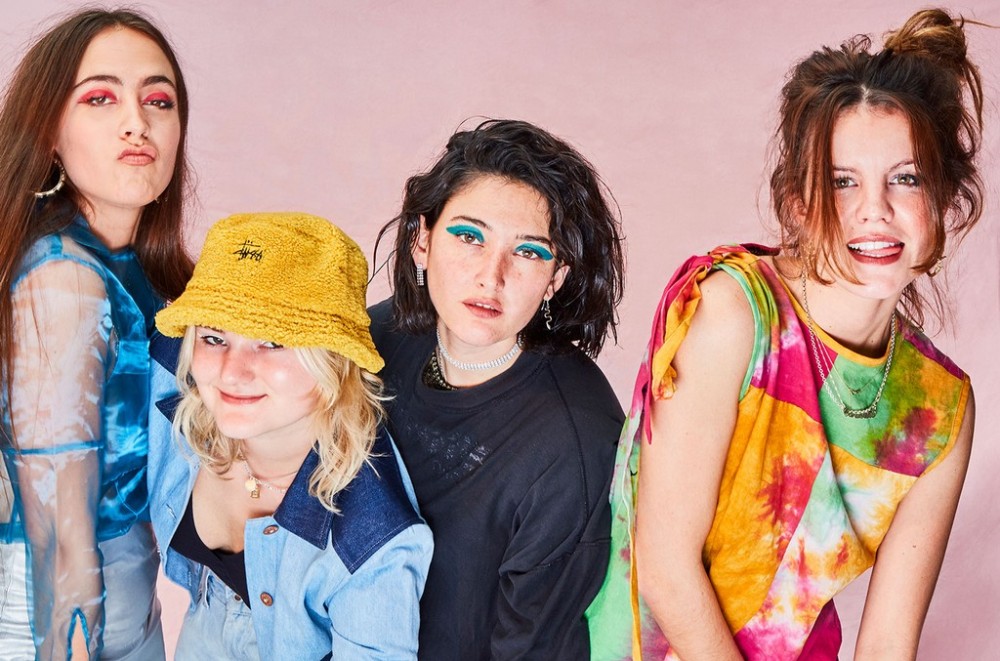 For about five years now, Madrid-by-way-of-Brooklyn quartet Hinds has enjoyed a reputation in America as a buzzy garage rock act — the sort of band that in-the-know indie fans love to love.

But they didn’t always get that same respect from their hometown, starting with their debut as a four-piece in 2014.

“In Spain, you have to release two records and prove that you’re an actual band. People tend to look down on smaller bands, while to the rest of the world, it’s the most exciting part of the industry,” vocalist/guitarist Ana Perrote says.

In the years since, Hinds (Perrote, Carlotta Cosials, Ade Martin, and Amber Grimbergen) have simply worked harder. That hometown respect eventually did come — and meanwhile, they found the confidence to write songs expressing what they’d been through on the way.

With their third album The Prettiest Curse, out Friday (June 5), Hinds aren’t afraid to openly explore the struggles — including sexism — that they have faced. “They see a guy yell and take his shirt off and do something wild and they’re like, ‘Woah, that’s awesome,’” Perrote says, her tone not complaining, but matter-of-fact. “If they see a woman do something like that, it’s like, ‘Oh, that’s wrong. She’s not behaving.”

Moving that lens around, Hinds wholeheartedly embrace the idea that “not behaving” is actually a superpower. They call out their harshest critics (both at home and abroad), sing in their native Spanish for the first time, and play their instruments even louder and harder than ever before — making for their most empowering album to date.

“Can I tell you something about you and your band / ‘Cause I’m sure you’d love to listen to my advice / You’re always out of tune / And there’s no place there for you,” Cosials and Perrote sing from a mansplainer’s perspective on their fired-up single, “Just Like Kids (Miau).” It’s one of Perrote’s favorite songs on the album, because “it’s the perfect answer for what it feels like to be a girl in a band,” she says.

The album title, too, speaks to the loneliness the band members have felt, even when in a crowd. “We came up with the ‘Prettiest Curse’ concept because it was something we used to jokingly [refer to] tour as,” Perrote explains. “We used to say we were cursed, because there is something bigger than you controlling your life, and you’re constantly surrounded by people, but you’re constantly alone as well. It is something you just can’t avoid as an artist. It’s what you love and it’s what makes you happy, but it also has some of those bad things.”

Hinds’ debut album, 2016’s Leave Me Alone, was a perfect snapshot of the band when they were starting out. 2018’s I Don’t Run saw the band coming into themselves, ready to rock out and show off their newfound confidence, honed during months on the road. With The Prettiest Curse, it was time to take their sound to the next level; the band “wanted to be open to absolutely every option. There was a bigger window that let us be more free,” Perrote says. “We were like, ‘This feels good, let’s try it.’”

Hinds maintained an open attitude for the whole process. “We weren’t scared about adding other instruments and letting someone else help us with production,” Perrote says, referring to how producer Jenn Decliveo (Demi Lovato, Ben Platt, Anne-Marie) worked with them to add more keyboards and pop melodies. “It was actually a relief — it was bigger than we thought it was going to be.”

Without a doubt, The Prettiest Curse is some of Hinds’ most pop-leaning work. Their lead single, “Good Bad Times,” is equipped with a stomping beat and an easy-breezy melody; it has the power to swirl around in a listener’s head for days. However, the punk attitude that initially made fans fall in love with the band is still very much there, and it’s heard in the cool vocal delivery and the explosive, glimmering guitars.

Even the vivid album cover, created by Spanish photographer/painter Ouka Leele, is purposeful: it encapsulates all of the band’s memories from when they were out traveling away from loved ones. Perrote describes it as “an Airbnb,” since it represents all of the places they spend time. The four members are sprawled out in front of a pearly blue and neon green backdrop among random objects like guitars, flowers, a “reserved” sign, a deck of cards, books and drinks.

“It wasn’t only about taking a picture of the band, which was what we did with the last two covers,” Perrote says of the artwork. “We wanted to open our minds… We wanted a piece of art. This time we were like, ‘Let’s do the exact opposite and do the brightest color we can.’” The result is an image that reflects the music: bold and bright.

Still, there is real emotion beneath the glitter on The Prettiest Curse, and Hinds hopes fans are able to relate to those concepts of prejudice and loneliness.

“I hope people can unite a little bit,” Perrote says. “It is pretty common to think that you are the only person that’s suffering and no one is going to understand it…but even if we’re not all together in the same room, we are all similar at the end of the day, and we can all help each other just by talking about it.”