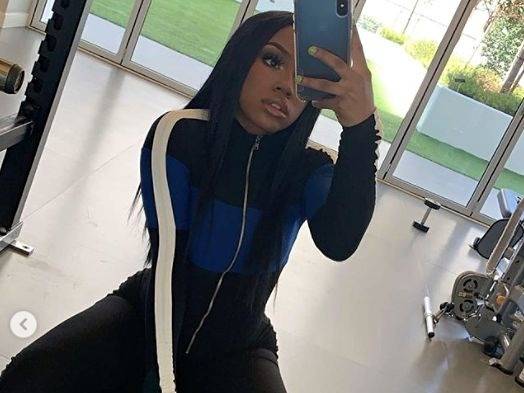 Houston, TX – Floyd Mayweather’s 19-year-old daughter Iyanna has been arrested for felony aggravated assault with a deadly weapon. According to TMZ, she’s currently being held at Houston’s Harris County Jail after being taken into custody around 1:30 a.m. local time on Saturday (April 4).

Law enforcement sources say Iyanna had a confrontation with the the mother of NBA YoungBoy’s child — Lapattra Lashai Jacobs — at YoungBoy’s home. One Iyanna arrived at the house, she told Jacobs she was YoungBoy’s fiancée and ordered her to leave.

The argument then moved into the kitchen, where Iyanna was in possession of two knives. As Jacobs stepped toward Iyanna, she reportedly charged at Jacobs with one of the knives, which she told police she didn’t feel. But then, Iyanna stabbed her with the second knife and fell to the floor, where she was discovered by EMTs.

An alleged video of the scene shows blood all over the floor. The caption says Jacobs is in “critical condition,” but that has yet to be confirmed.

Crime scene of Floyd Mayweather’s daughter Yaya who damn near killed a girl after stabbing her over #NBAYOUNGBOY . The girl who was stabbed is in critical condition right now. Yaya has been charged with assault with a deadly weapon . #floydmayweather #YayaMayweather #yaya pic.twitter.com/GgueMAYL39

YoungBoy was briefly places in handcuffs as a precautionary measure. Iyanna told the authorities Jacobs pulled her hair outside of the house and then ran into the kitchen, where the violent altercation went down. Iyanna told police she’d never met Jacobs before.

Watch video of the scene below.