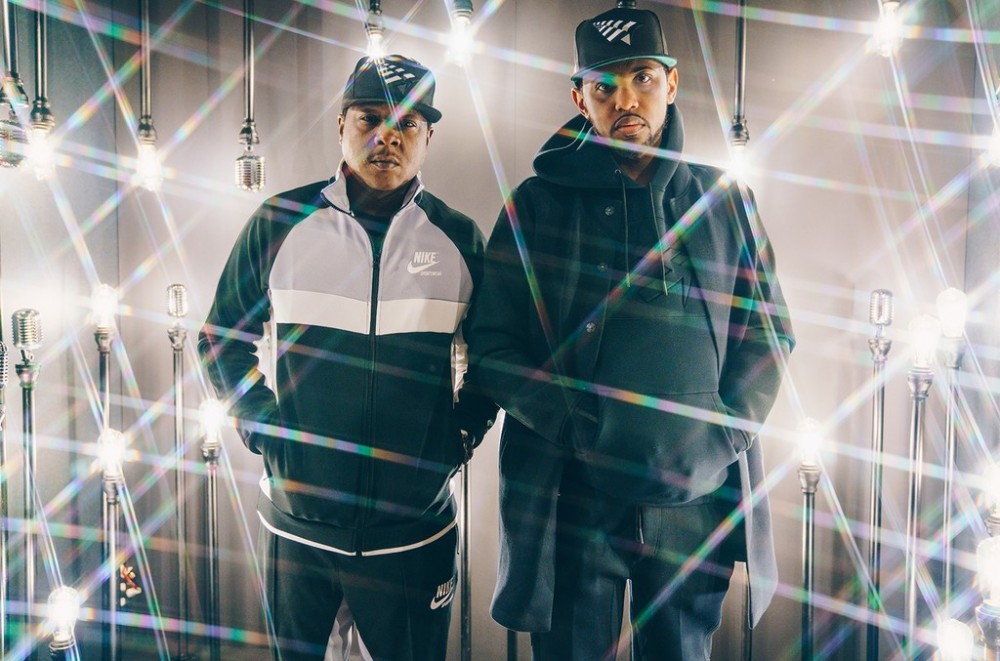 It was Freddy versus Jason once again. Fabolous and Jadakiss served as the latest battle as part of Swizz Beatz and Timbaland‘s Verzuz series, as the New York veteran duo faced off for an Instagram live audience in the hundreds of thousands on Monday night (June 29).

With more than four decades in music between the pair of rap titans, fans have had their calendars marked and Timberlands laced since the highly anticipated matchup was announced last week. There’s no bad blood here either, as the prolific MCs remain close friends and also released their underrated Friday on Elm Street joint album back in 2017.

Instead of looking at it as more of a heavyweight bout, Fab and Jada see saw as a chance to showcase the depth of their decorated discographies, which range from underground freestyles to mainstream radio hits. “That’s what Verzuz really is, just celebrating your catalog,” The Brooklyn rhymer told The Breakfast Club.

After nearly a half-hour delay in the studio, more than 200,000 blitzed the IG turnstiles to take in the tightly contested 20-round battle, which came with a heavy dose of nostalgia along the way. Check out how Billboard scored Monday night’s matchup between Fab and Jada below.

Kiss kicks things off with standout feature in his arsenal pitting The LOX alongside Hov and DMX. Fab continues the trend by jabbing back with his appearance on Weezy F. Baby’s seminal Tha Carter III, which finds him attempting to set the tone on an intimidating Alchemist beat.

Jadakiss fires back with a LOX deep cut featuring the Yonkers native sparring over a hard-hitting Preemo beat, which is something the people had been waiting on. Fab’s response doesn’t quite measure up, as he stays in his feature bag with a Cassidy collaboration.

“Wrote this verse right here in the bathroom with no shirt on,” Kiss quips before pressing play. The underrated “Made You Look” remix may sound familiar, since Ludacris also brought it out for his battle a few weeks ago against Nelly. The Brooklyn native kept the feature game going with one of his best, where he flexes alongside Kanye West and more on Lloyd Banks’ energetic “Start It Up.”

Kiss prefaced his next move with a story about how he paid $7,500 for the “By Your Side” beat, but ended up charging Interscope the fee with a little extra interest on top. Fab takes it back to 2003’s Street Dreams with his Diddy and Jagged Edge collab, but Jada still holds his head high after round four. Fab also made sure to toast to the late Kobe Bryant, who he met at the “Trade” video shoot for the very first time.

Fabolous is one-upping Jada by getting on the mic and rapping along to his songs. Here, he strikes with the menacing “Imma Do It,” but that’s not enough to keep Kiss down, who elected to fire off a Money, Power, & Respect fan favorite with the motivational “All For the Love.”

Round 6: The LOX’s “Chest 2 Chest Freestyle” vs. Fabolous’ “Keepin’ It Gangsta”

The 45-year-old went digging in the crates and came back with the grimy “Chest 2 Chest Freestyle” from a DJ Clue mixtape. Fabo knew he didn’t stand much of a chance in this round, so he trots out one of his weaker selections with the Ghetto Fabolous cut.

“You don’t gotta perform every song. This ain’t Dancing With the Stars,” a winded Jada jokes with Fab singing along to every one of his tracks by this point. Still, Kiss brings the firepower here repping for the Ruff Ryders, alongside a pair of legends in Snoop Dogg and Scarface.

In desperate need of a response, Fab brings out a punch he knew would connect with the “Brooklyn” anthem alongside the borough’s deity. Kiss originally set the tone with a classic Noreaga posse cut in “Banned From TV,” which results in a crowd-deflating tie.

Round 9: The LOX’s “Blood Pressure” vs. Fabolous’ “Young OG”

“I burned my ear with the headphones on when I recorded this,” Kiss kicks off the round with some friendly banter. “Blood Pressure” might be best remembered for giving author Karrine Steffans her Superhead nickname, but it just doesn’t measure up to Fab’s smooth Soul Tape 3 cut.

The first cross-pollination of the night, as Jada is taken back by Fab playing a song with him on it, alongside trap legend Young Jeezy. Fab baits Kiss into an argument about whose song “Can I Live” is to quiet his buzz, as Jada pleads his case that this used to be a LOX record before business got involved.

When making the turn into the battle’s second half — where he now plays first, with Jadakiss responding — Fab isn’t playing any games, as the jacket comes off and he goes straight to the t-shirt to take center stage. Jada delivers his first elbow drop of the night by dipping into his lethal pen game for Puff and BIG’s motivational “Victory” anthem, which he actually wrote for Diddy.

“This is D-Block, mighty, mighty D-Block” could be heard reverberating throughout Yonkers when Jada let this one go. Fab brings out more of a recent hit in Meek’s groovy “Uptown Vibes,” but the LOX staple is just too tough of an opponent in the third quarter to deal with.

After a few losses in a row, Fab knew he had to catch a win here. Loso elects to roll with the Tupac-sampling “Can’t Deny It” featuring the late Nate Dogg. The prideful hit record connects with the 200,000+ in the IG audience and lets him cruise to an easy victory in round 13.

Round 14: Fabolous feat. The-Dream’s “Throw It in the Bag” (Remix) vs. Jadakiss’ “Knock Yourself Out”

Following another crowd-pleaser from Fab, Jada expertly counters with a trip to Virginia. On its face, Jadakiss and Pharrell connecting might sound like a contrast in styles, but the pair of hip-hop legends easily mesh with heavy Kiss bars over the exotic Skateboard P production.

With Fab possibly taking a bathroom break, a buzzed Jadakiss has no issue gracing the mic and rambling for a bit. He goes on to “Run” up the score late with another tenacious feature, this time alongside Wu-Tang solo star and fellow New Yorker Ghostface Killah.

As Fabolous attempts to turn up the heat with some of the go-tos in his discography, Jadakiss makes sure to answer with another haymaker in the Bad Boy reunion “It’s All About the Benjamins.” In the IG comments, CharlamagneThaGod wanted to give Kiss two points, since he both penned the track and then hopped on the opulent tune’s remix.

Since the D’usse continues to flow in Jada’s direction, Fab attempts to close the gap on the scoreboard with an R&B banger in the uplifting “Make Me Better.” The single enlists a deadly combination that can’t be beat featuring Ne-Yo sliding on the hook, while Timbaland handles production duties.

Fab’s run continues with another flawless pick from his repertoire in the Lil’ Mo-assisted “Can’t Let You Go.” The LOX’s “Ryde or Die, B—h” is a solid choice, but isn’t going to cut it in round 18. Point Fab to make things interesting down the stretch with two rounds left.

Round 19: Fabolous feat. Tamia’s “Into You” vs. Jaheim feat. Jadakiss’ “Diamond in da Ruff” (Remix)

By this point, an intoxicated Kiss’ drunken commentary is only making things even more hilarious. He does get serious for a moment to pay Fab a huge compliment when admitting that if he does indeed get married, “Into You” would serve as his wedding song for the first dance with his wife. There can’t be much higher respect than that, as Loso lands a devastating uppercut with the signature “Into You.”

Round 20: Fabolous’ “Breathe” vs. Jadakiss feat. Styles P’s “We Gonna Make It”

Both artists end the celebration on a high note, with a pair of fan-favorites in the enduring “We Gonna Make It” and the Just Blaze-produced “Breathe.” At this point, they might need to carry Kiss home, as he defers to his DJ to make the final selection of the night.

The overtime rounds really showed that Fabolous had a few bullets left in the chamber, as DJ Boof spun a mix that includes some great features like his role on Trey Songz’s playful “Say Ahh.” Fab fans were left with their hands up wondering what happened in the comments.

Fab weaved into the streets and the bedroom with his array of selections throughout the night. Outside of rapping with goliaths like Jay-Z, Fabolous also covers more tender fare with his R&B-leaning hits. Both artists actually left ranging collabs on the table with Mariah Carey and Jennifer Lopez, among others.

As previously mentioned, Fab left much to be decided when DJ Boof went off in the bonus round. With the fourth quarter deficit being too much to make up, fans called for tracks like From Nothin’ to Somethin‘s “Baby Don’t Go,” “Baby,” and “My Time” featuring Jeremih to make appearances.

Jadakiss earns this category by a mile. As the drinks kept on flowing, the Kiss of Death rapper only became more entertaining throughout the night. Whether it was Jada cutting off the DJs mid-track, standing up in his matching yellow outfit, or telling Fab this isn’t Dancing With the Stars while performing, Kiss probably gave the best solo performance we’ve seen throughout Verzuz.

Jada surprised the audience when he broke out Puffy’s “Victory” in response to Fab’s “Ball Drop.” Allegedly the last song B.I.G. ever recorded, the BK legend’s rhymes still sound as menacing as they did over two decades later. Fab came close with a knockout of his own with “Into You,” which Jada admitted to being his favorite of any Fabolous record and hopes to have him perform it at his wedding.

This is D-Block, mighty, mighty D-Block. It was Kiss’ night, according to the vast majority of fans in attendance. Some gave Jada the edge in a landslide, but our scorecard has the contest being a little tighter than you may expect. Overall, this is another win for the culture, providing light in a tough year.