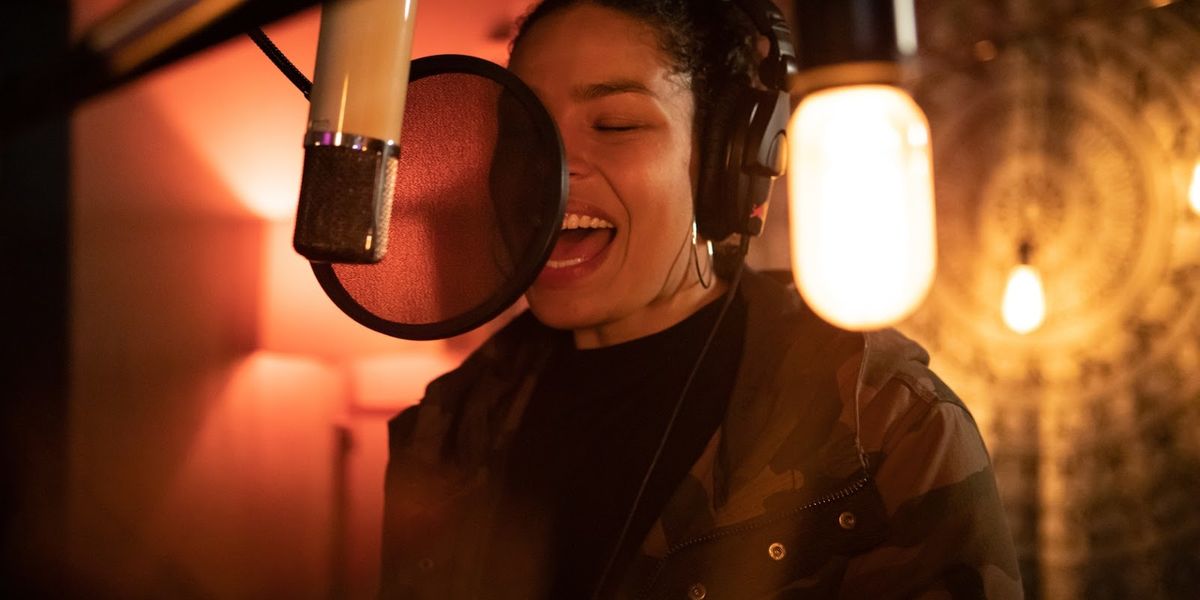 The last thing Jordin Sparks did before California was thrust into quarantine was craft a new EP.

At the Red Bull Studios in Los Angeles, Sparks arrived in mid-February for a collaborative three-day workshop called the Red Bull Studio Sessions. The goal was to create an EP’s worth of music in three days with local songwriters Jordyn Dodd, P Wright, Rami Jrade, and Sad Alex. Sparks, who after her season six win on American Idol, became a Grammy-nominated platinum-selling artist, mentioned that she wanted the EP to focus on her family and in turn was fed compelling instrumentals and melodies by the songwriting quartet. While Sparks was undoubtedly the glue that held the effort together, her fellow collaborators played a big hand in the development of her new EP, including songwriting.

I asked Sparks if it was strange to have such personal experiences relayed back to you by outsiders you just met. “I think the reason why so many people love music is because a song can speak for you in ways you can’t,” she said. “For me, to have somebody try and write from my perspective, it’s actually a really beautiful thing to see how they would translate that. It doesn’t usually work, but in this instance, it was love at first sight.”

Sparks’ new EP, Sounds Like Me, is a sleek amalgamation of funk, R&B, pop, and even gospel. The 30-year-old mother, who got her start when she was just 17, rose to post-Idol fame in 2007 with her timely-brand of arena-ready pop music. Her collaboration with Chris Brown was the third highest-selling single of any Idol contestant and snagged a Grammy nomination for “Best Pop Collaboration with Vocals.” Shortly after, she started to drift away from pop music and took a six-year break before returning with 2015’s R&B heavy Right Here, Right Now. “I don’t know if I drifted, I just wanted to be able to express more. When I was 25 I felt that I wanted to do so much more than this,” Sparks said, referring to her pop sound. “I’m always in competition with myself, so I’m always trying to be better than I was and expand myself.”

The Red Bull Studio Sessions seemed very collaborative. Is your creative process usually so collaborative, or did it take some adjusting?

“I walked into the room and was just open to the possibilities of what could happen, you know? If you just go in with a clean slate and an open mind, you come out of things experiencing them so much deeper and having a more profound experience.”

You guys had a lot of fun then?

“We clicked right off the bat! And it’s not that I haven’t had that happen with other projects, but it’s not often that you can realize that you’re doing the right thing with the right people at the right time. You see it in hindsight, but it’s rare that you can be present for it. We were thinking of making maybe three songs, and we ended up with six great songs.”

You briefly mentioned that after American Idol, people wanted to put you in a box, and it seems like that happens to a lot of Idol winners where they feel boxed into a certain pop sound or mood. I’m curious when you started to kind of distance yourself from your initial sound?

Do you remember a moment where you started to feel that shift?

“I don’t know if I ever drifted from my core self. I always loved R&B music and pop music. I’ve always loved that. But when I was 25, I felt that I could do so much more than this, like where I’ve been at. So from 22-25, I started to experiment more, [and] it took until I was 25 to get the project out.”

I feel like just in life, those are the ages when you start having the same questions about growing up. You want to expand yourself and do things differently. On “Unknown,” you say “funny how your pride is silenced in the storm,” and I’m curious what your lessons involving pride have been like growing up?

“Pride is one of those things that can keep us from true growth and true healing. [It] can hinder our experiences with other people and hinder our experiences with other things, and we all have it. We can’t pinpoint it, and I definitely think people have more of it than others and use it in a different way, but for me, I had a few moments where I could see somebody else’s pride was keeping them from being the best person they could be merely because they were comfortable where they were at.”

In your own life as well?

“In my own life as well. Where I’m stubborn enough to be like: ‘Well, I don’t really think I need that,’ when it is exactly something I do probably need. But when that time comes back around and it shows up, there is nothing you can say or do except take it and own it, and that’s where the growing starts. But when Jordyn said that line on ‘Unknown’ I was [floored] and that’s the coolest thing about songwriting. Everyone has stories to tell. Music is so much for then the song you bop your head to.”

Check out a behind the scenes look at the studio sessions below.