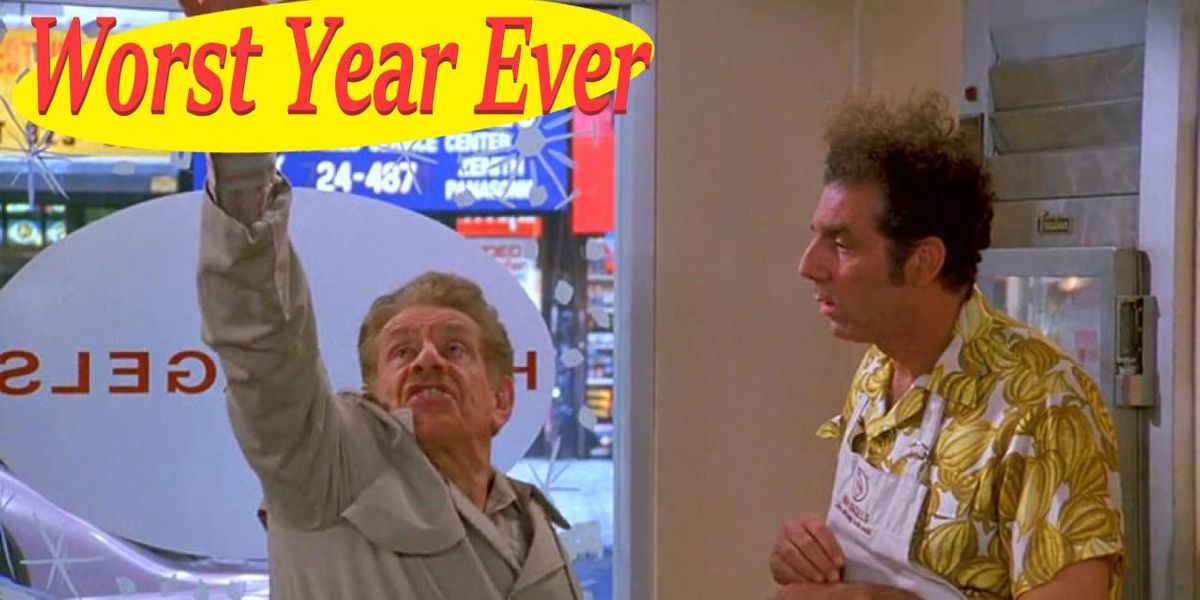 It’s December 23rd again, which means that once again it’s time to ditch the distracting tinsel, reject the commercialism of Christmas — the hordes worshipping at the alter of consumer capitalism — and celebrate the only holiday for the rest of us: Festivus!

There are many ways to celebrate this venerable holiday: You can erect a traditional Festivus Pole — we recommend aluminum for its very high strength-to-weight ratio or you could make a generous donation to The Human Fund. And of course Festivus isn’t over until the Feats of Strength are completed.

But in our estimation the most important part of celebrating Festivus is the sacred Airing of Grievances. But unlike most years — when you would direct your pent up ire at your loved ones — in 2020 we can all focus on our common enemy: this stupid, disgusting year.

We’ll go first. Here are all the petty — and not-so-petty — ways that 2020 has disappointed us.

What’s the Deal with Toilet Paper?

So there are actually some good reasons why there was a shortage of toilet paper in 2020. With people spending more time at home, TP demand shifted away from the industrial one-ply monstrosities you find in public restrooms and workplaces toward more of the standard consumer rolls.

It’s not easy to quickly shift production, so it was inevitable that there would be some empty shelves in the toilet paper aisle at Costco. Nonetheless, the insane people who were loading up entire truck beds and storage units with toilet paper and hand sanitizer revealed an ugly aspect of humanity.

We all knew that people could be greedy and selfish, but it was surprising to see those impulses extended to depriving fellow human beings of the means to wipe their butts.

“Tiger King” Was a Weird Obsession

Maybe it was a sort of mass hysteria brought on by the first taste of isolation in lockdown, but we all got way too into Tiger King. Sure, it had some dramatic twists and turns, but it was ultimately a sad story about a lot of strange, broken people, and we might all be better off if we just erased the month we spent obsessed with it.

Jerry Stiller, AKA Frank Costanza from Seinfeld, AKA the father of Festivus passed away in May of 2020. He wasn’t just a star of stage and screen — along with his late wife and comedic partner Anne Meara. At 92 years old, Jerry Stiller was still a force to be reckoned with.

His son, actor Ben Stiller reported that Jerry “went peacefully, and he had a sense of humor, for sure, until the end,” which is good to hear. Still, the world is a little bit dimmer for his loss.

Another thing that happened in May is that Tesla’s mega-billionaire CEO Elon Musk and his partner, synth-pop musician Grimes welcomed their first child to the world. And they named their baby X AE A-XII (pronounced “Ex Ash Twelve”).

While they’re technically free to name their kid whatever they want (though this might count as child abuse…), Musk has been emblematic in 2020 of the misplaced respect that wealth attracts. He’s not the genius his super-fans would have you believe. He’s just a rich, COVID-denying weirdo who happens to have a lot of money.

Oh, and thanks in large part to government aid that has propped up the stock market and favored rich weirdos, Musk added $140 billion to his wealth in 2020, while millions of Americans struggled to pay their rent and feed their families. Speaking of which…

2020 saw a lot of talk about “heroes” who were forced to work in hazardous conditions for an unlivable minimum wage. Is it any wonder workers were pushed to strike? Maybe we should stop treating them like “heroes” and start treating them like human beings.

One extremely weird aspect of 2020 has been Rudy Giuliani’s arc as President Trump’s personal lawyer. In particular, the unhinged press conferences — where he rubbed snot on his mouth, dripped hair dye down the sides of his face, and accidentally booked the parking lot of a landscaping company — have been noteworthy.

It’s time for him to stop inventing flimsy conspiracies about falsified votes and get back to ridding New York City of the very real problem of falsified non-fat yogurt.

Speaking of voter fraud conspiracy theories, how is it okay that the president refuses to acknowledge the results of the election nearly two months after the fact? With dozens of spurious lawsuits — most of which have been thrown out — and a lot of (hopefully) empty bluster about martial law, the whole situation has called attention to the fact that American democracy is a baroque mess.

Do we really need to have 51 distinct state-level elections to decide who should be the president of the whole country? If we had one popular vote with one set of rules, this would all be so much simpler, and it would be much more difficult for a con man to ignore the fact that Joe Biden’s 81 million votes are a lot more than his 74 million votes.

What else? Oh, right…

The fact that there is a deadly respiratory virus currently spreading around the world would be bad enough on its own. But the fact that the president and the GOP are actively trying to “yadda yadda yadda…” past more than 320,000 Americans who have died of COVID — while countries like Taiwan and Australia have successfully contained the virus — is pretty awful…

Obviously, this is only scratching the surface of all the terrible things in 2020. But as long as we’re keeping track of all the worst aspects of this awful year, let’s not forget about the best part of 2020: the fact that it’s almost over.