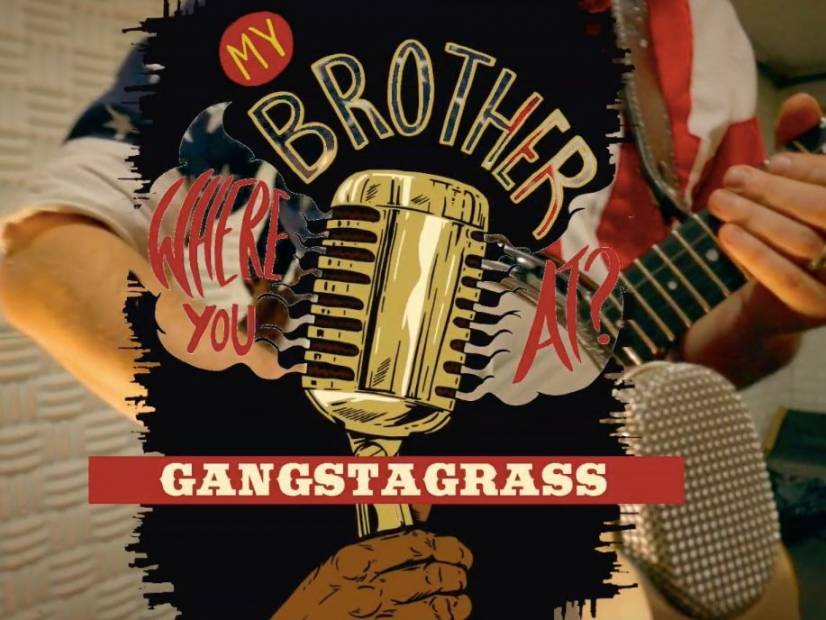 GroovyTracks Premiere – Organized Konfusion MC Pharoahe Monch and the Pharcyde’s Slimkid3 are marveling at Gangstagrass’ new mixtape, My Brother, Where You At?

The eight-track project reimagines several Hip Hop classics, putting a bluegrass spin on them — from Pharcyde’s “Passin Me By” to Pharoahe Monch’s “Simon Says.” The members of the group bring an uniqueness to each song while managing to keep the original track’s integrity intact.

“I think it’s a dope twist, and you have to be honored any time another artist digs your music enough to do an homage,” Pharoahe Monch tells GroovyTracks. “And they committed 100 percent. Two thumbs up.”

“That was so dope!” Slimkid3 adds. “I love it! They really did a great job of making a classic their own. It was a wonderful twist on Hip Hop meets the Bayou.”

According to the press release, the idea for the mixtape was born from a Gangstagrass rehearsal. As they were discussing the idea of doing versions of classic bluegrass tunes, it became clear to musician R-SON there was no real treatment like that of classic Hip Hop songs — but he knew Gangstagrass could do it.

As the mixtape began to take shape, they made sure to choose songs with instantly recognizable samples that were also easily translatable with the band’s instruments. The initial tracklist grew to over 15 songs in a matter of hours, so they decided to trim it and make it a multi-volume project, adding new songs, styles and artists.

Weekly rehearsals began last month and they recorded the entire project on January 5 at JayBlakLabs in Philadelphia. The rest is history.

Check out the My Brother, Where You At? album stream, cover art and tracklist below.