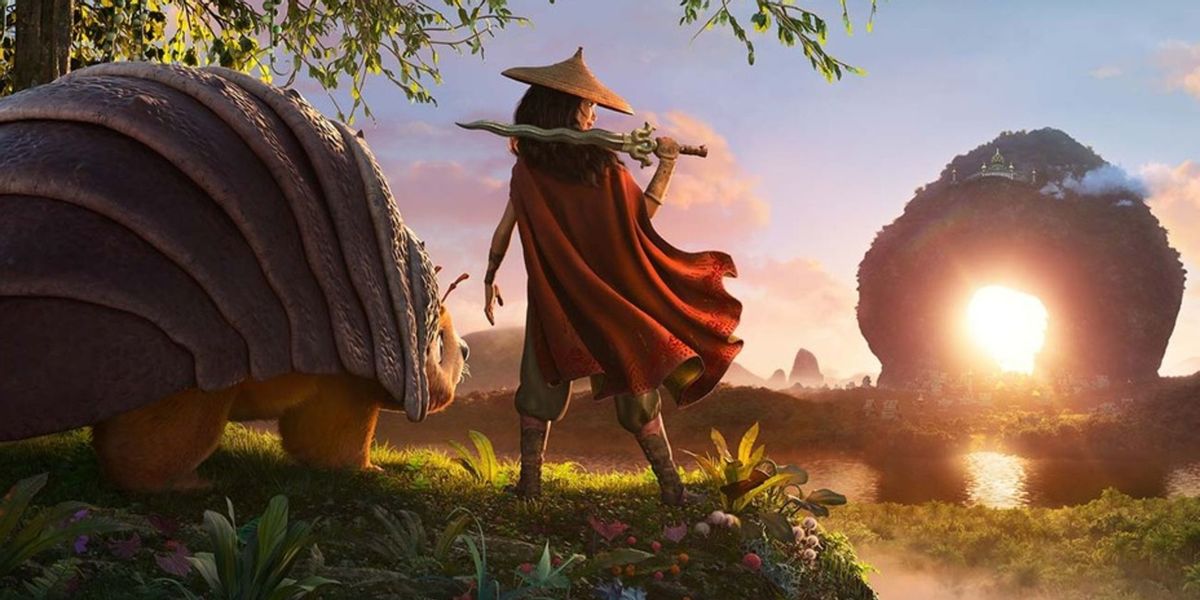 The first trailer for Disney’s upcoming animated movie, Raya and the Last Dragon, has just been released.

The movie, scheduled for release in March of 2021, stars Kelly Marie Tran as Raya—guardian of the dragon gem—and Awkwafina as Sisu the last Dragon. And it honestly looks pretty great…if a bit familiar.

Let’s break it down. In a world occupied by strange and fantastic creatures—some of them seemingly hybrids of animals we know—long-standing peace has been disrupted, and humanity is divided into four cultures identifiable by their color schemes, emblems, and associated animal companions.

Now, the only hope to restore peace to the world is for a young female warrior to find a powerful user of elemental magic—a figure who is blend of a human and a mystical being, and the last survivor of their kind—and to help them to tap into their latent magical abilities…

If that sounds remarkably like the premise of Avatar: The Last Airbender, then congratulations on having seen that show’s intro. Even the new film’s official synopsis sounds pretty close to that intro:

Long ago, in the fantasy world of Kumandra, humans and dragons lived together in harmony. But when an evil force threatened the land, the dragons sacrificed themselves to save humanity. Now, 500 years later, that same evil has returned and it’s up to a lone warrior, Raya, to track down the legendary last dragon to restore the fractured land and its divided people. However, along her journey, she’ll learn that it’ll take more than a dragon to save the world—it’s going to take trust and teamwork as well.

But that’s not really enough to label Raya and the Last Dragon a ripoff. Many of these elements are classic tropes of the fantasy genre and could just as easily be used to prove that Avatar is a ripoff of Pokemon or Naruto or Harry Potter.

While these parallels alone are edging toward suspicious, there’s really not enough to call foul. The elemental magic, for instance, seems to play a much smaller role in the world of Raya.

Likewise with the fact that the two properties seem to take place in a version of Asia that draws elements including martial arts, clothing, and artwork from a variety of Asian cultures. That’s just sorely missed representation of a part of the world that is home to more than half the people on Earth.

And, actually, the water tribe never really had a clear animal companion in Avatar. Unlike the earth kingdom (badgermoles), the fire nation (dragons), and the air nomads (sky bison), the water tribe attributes their power over the water to the moon spirit…who then transformed into a koi fish (before fusing with a teenage girl…), but it’s not like water benders ever rode around on koi! And each of the four tribes in Raya clearly has a distinct animal they travel with, so… that’s different!

Even a battle with a mysterious sword-wielding figure in a Noh-style demon-mask can be chalked up to parallel inspiration drawing from Samurai and other traditions. If you’re creating a fantasy world with real-world cultural touchpoints, minor coincidences like these are bound to crop up. You might as well be mad that both Raya and Avatar contain dragons.

This whole conspiracy theory is falling apart at the seams! Except…for one outfit.

A blue wrap with some light/white trim is already enough to remind Avatar fans of the water tribe’s signature aesthetic—similar to Sokka in season 2. But if you’ve seen the sequel series, The Legend of Korra, then adding the darker blue sleeve-gloves, and the hair in a high ponytail with two dangling strands in front held in place with blue hair accessories…

Leaving aside any loose resemblance in their actual character design, the outfit Raya is wearing in much of the new trailer is so similar in all these details to one of Korra’s signature looks that it’s hard to imagine getting their without directly drawing from Korra’s signature look in Avatar: The Legend of Korra.

While it’s possible that someone on the creative team might have subconsciously absorbed that aesthetic and accidentally recreated it for Raya, it calls attention to the other elements that are similar to the Avatar universe, until it all seems like way too much to be a coincidence. But would Disney really take the risk of blatantly ripping off such a popular and well-known franchise?

Well, it takes some time for a polished animated movie like Raya to come together. Moana, for example, took about five years to make. If we track that back from Raya’s original release date of November, 2020 (since pushed back to March of 2021) we can assume that Raya and the Last Dragon has probably been in development since 2015 or 2016—not long after the final season of The Legend of Korra aired.

At the time, the series was not well known. After its first two seasons aired on Nickelodeon, it moved to Nick.com for two web-exclusive seasons. Even the previous series Avatar: The Last Airbender was fairly niche—with a devoted but relatively small fanbase.

Maybe Disney wanted to make a Last Airbender or a Korra movie but wasn’t able to reach an agreement with Nickelodeon or with the series creators Bryan Konietzko and Michael Dante DiMartino—who had already been burned by M. Night Shyamalan’s awful adaptation. Or maybe Disney decided the brand had been too damaged by that 2010 live-action disaster.

At any rate, nothing can stop Disney. Disney rules the world. So it might be that they figured out a way to make Avatar theirs too. They could take the core appeal of the show’s fantasy world its central arc and change it just enough to not be infringing on anyone else’s IP (they certainly know their way around copyright legislation…).

Swap the long-lost avatar of an ancient light spirit for a long-lost water dragon and make up some new cute fantasy creatures. Then just take away the blue from the water tribe’s color scheme, blend it into the fire nation’s red, and now you have white and purple instead! Boom!

Maybe they figured that—even if the main character took some pretty obvious cues from Korra, it wouldn’t really matter because there wasn’t a big enough fan base to really cause a problem.

It wasn’t until earlier this year—when the series came to Netflix amid the pandemic lockdown—that the world of Avatar reached a wider audience. By that point, Raya and the Last Dragon was likely close to completion—too late to make major changes.

Of course all this speculation could turn out to be way off the mark. We only have one trailer to go by. Trailer number two is probably not going to introduce an acerbic and blind martial arts prodigy, an centric inventor with a long-suffering assistant, or a royal nemesis with a prominent facial scar.

It might even turn out that Sisu, the savior-dragon, has none of Aang’s goofy, frenetic energy, although—given the character design and the casting of Awkwafina—that seems unlikely.

Still, even if it turns out to be a total rip-off, it’s hard to watch the trailer for Raya and the Last Dragon without thinking it looks like a lot of fun. And—considering the likelihood that Netflix’s live-action Avatar series will be another disappointment—Raya might be the closest thing to a worthy successor fans can expect.

And if some accusations of plagiarism can inspire Disney to loosen their stranglehold on US copyright law, all the better.