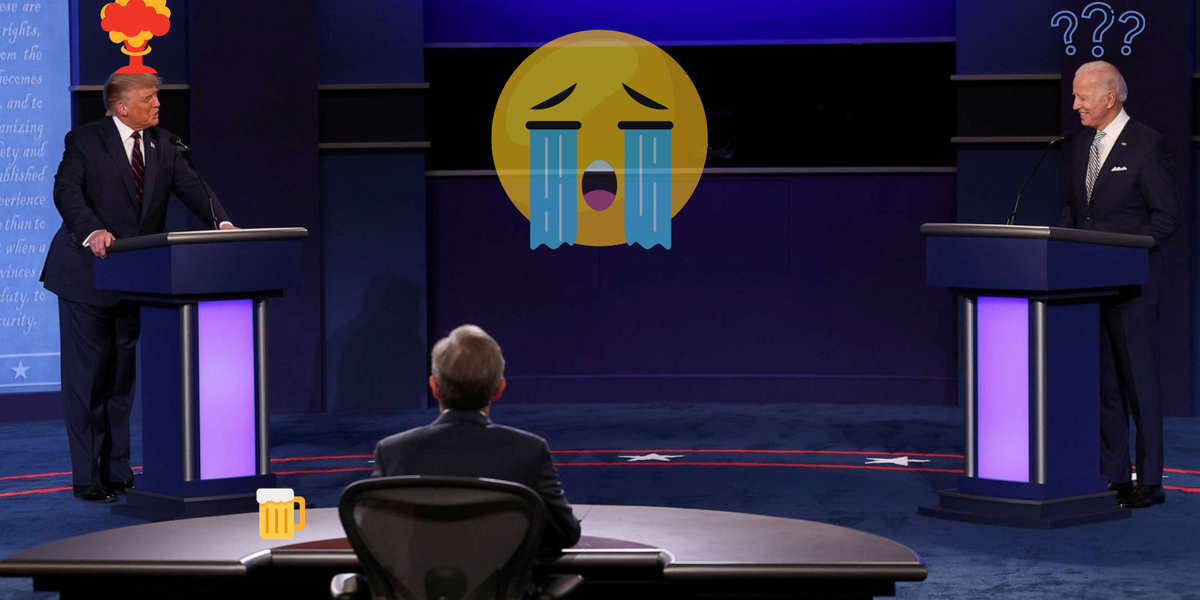 While we’ve known for a long time that Trump doesn’t think treating others with basic respect is a necessity, that fact has never been clearer than last night when he spent 90 minutes interrupting and insulting both opponent Joe Biden and moderator Chris Wallace. Not only was the majority of the debate just the three men talking over each other; when Trump did actually form a complete sentence, he mostly spouted blatant lies and falsehoods—not to mention that he flat-out refused to condemn white supremacy.

In fact, if you want to see just how many times both men exaggerated, twisted, or just straight up denied the truth, check out Politifacts 100% accurate fact check of the debate. It will quickly become clear that Trump almost exclusively lied while on the debate stage.

Still, facts have become a negligible facet of democracy under the Trump administration, so it’s no surprise that Trump supporters still feel certain that their president’s truly childish behavior in the debate was not only acceptable but praiseworthy. To be honest, it’s difficult to fathom that there are many truly undecided voters at this point. You’re either against the rise of fascism, white supremacy, misogyny, and misinformation, or you’re voting for Trump and have decided those things are fine with you. In the most polarizing political moment perhaps in the history of America, the undecided voter is rare (and probably not paying attention).

So if most people are already certain about who they’re voting for, why did anyone watch the debate? Let’s be honest with ourselves: we watched because we knew it would be such a disaster it would be entertaining, we watched as a form of passive self-flagellation, and most of all we watched so we could keep up with the Twitter discourse. The only bright spot in the darkness of 2020 is the endlessly hilarious Twitter takes that both encompass the chaos of the moment and remind us not to take anything too seriously.

Here are our favorite Tweets about the first 2020 presidential debate, divided by category.

Watching the debate as a form of self punishment

Self care is easier said than done, and as the months of social isolation wear on, we’re all getting more and more prone to doom-scrolling on social media, reading opinions that we know will make us angry, and engaging in Facebook comment battles with our weird great uncle who might be an actual Neo-Nazi now. For many of us, watching the debate was just an extension of this toxic behavior.

We protected our mental health by not watching this debate.

The amount of times Trump interrupted either the moderator or Joe Biden were truly countless, and ultimately forced Biden and Wallace to interrupt him and each other to get a word in edgewise. What resulted had a similar energy to a Kindergarten classroom if all the students were on amphetamines.

We HAVE the technology to mute a microphone. That is something that we have.

Poor Chris Wallace had the toughest job of the night. He had to try to maintain some semblance of control while asking important questions and then ensuring that the American people could actually hear the answers to the questions. It ultimately proved to be an impossible task, and America was divided on whether or not he could have done better.

Someone start a GoFundme for Chris Wallace’s bar tab

Chris Wallace is struggling, trying to seem like a jovial hale fellow well met., while being mugged.

If I wanted to watch three out-of-touch old white men yell at each other, I would have just waited for my family Thanksgiving in Texas.

Thanks, I’m fine. But everyone better vote. https://t.co/fkuQ042HvM

Men are too emotional to be president.

From the moment Joe Biden said “Would you just shut up, man,” many started thinking about the double standards for men and women in power.

It’s not about looks, but these are pretty funny.

Biden: It’s hard to get any word in with this clown
Trump covered in orange makeup: Hey hey let me just tell you

Again, Trump refused to condemn white supremacy outright. He told the Proud Boys to “stand by and stand down,” something that some members of this violent extremist group are taking as a call to arms.

There were no winners and the losers were the American people

While we think Biden did his best to retain some level of calm under the circumstances, there is no question that the entire debate was a disaster that provided almost no concrete information.

trump: i support bad things. my opponent supports good things
biden: shut up, man. i do not

While I feel that I could summon the rage to creatively disembowel Trump, Joe Biden only makes me angry enough to w… https://t.co/CNwxsZKBdr

Disgustingly, Trump repeatedly went after Biden’s family, insulting his son Hunter repeatedly and (falsely) claiming he had received money from Russia and been dishonorably discharged. Trump then later made it very clear that he is prepared to deny the election results should he lose.

Politics aside, if any other American were on national TV bum-rushing a parent as they talked about a vet son havin… https://t.co/xpIEa1n12v

For those who hadn’t been listening for the past 4 years, Trump just told you that he ain’t leaving and that he is… https://t.co/dd0XUILF9y

No matter what you took away from the debate last night, make sure you’re registered to vote and have a plan to do so. Check your voter registration at Vote.Org.