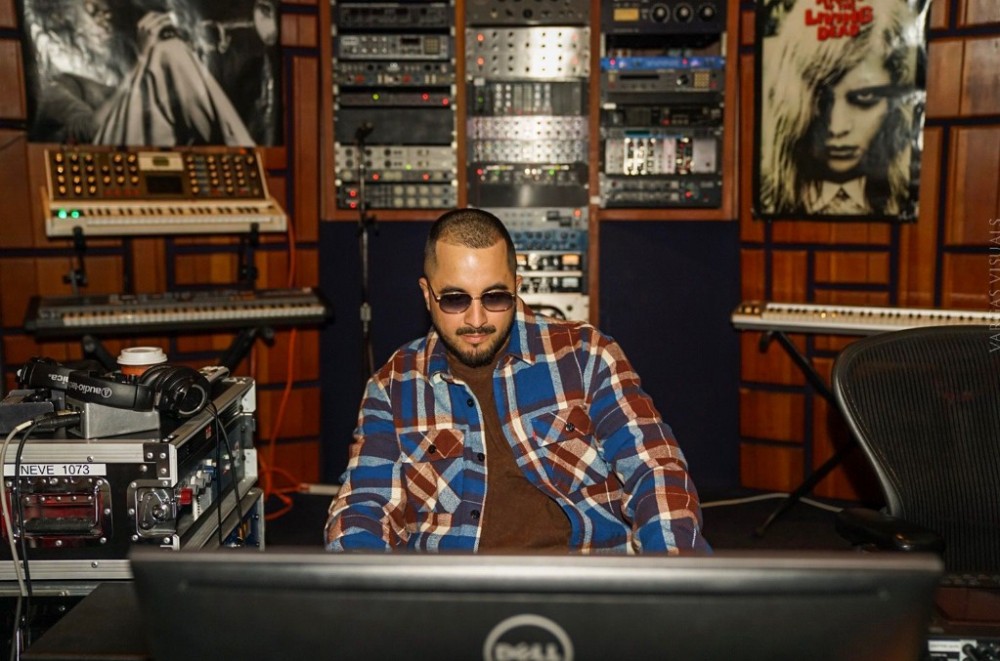 With the coronavirus pandemic highlighting essential workers who would normally be glossed over on normal weeks, many in the music world also slip under the radar and don’t get their fair due. CA$HPASSION is a name people might not be familiar with outside of a select group of fans who decided to ink themselves with a Cactus Jack tattoo.

Hailing from Modesto, Calif., Jimmy Ca$h made the move to Los Angeles with the intention of learning the ropes as a freelance engineer at Hollywood’s Paramount Studios to support his rap dreams. A 2011 session then changed his life when he met a neophyte Travis Scott, who he remembers exuding that same chaotic energy that’s become a staple of La Flame’s raging artistry.

The duo immediately clicked, and Ca$h has been Scott’s engineer ever since, as the Houston native pretty much refuses to record with anyone else. Jimmy’s role as Cactus Jack’s secret weapon can’t be boxed into just engineering. Like a five-tool player on the baseball diamond, Ca$h is a chameleon in the studio who contributes to vocals, recording, engineering, producing, and writing with a hands-on approach.

Earlier in March, Jimmy co-produced a pair of records in “Company” and “Candy” alongside WondaGurl on Don Toliver’s anticipated Heaven or Hell debut album. Ca$h also recorded Toliver’s hazy vocals for the project and mixed the 12-track LP alongside music savant Mike Dean. “He’s got a crazy tone and he’s singing so prolifically,” Ca$h tells Billboard. “It reminds me of when I met Travis, actually.”

Hesitant to give away any secrets from the secretive Cactus Jack workshop, as fans patiently await La Flame’s ASTROWORLD follow-up, Ca$h divulges that Scott has been “full-fledged on the production” and wants to do “the majority of everything” when it comes to his next project, which he hints could arrive later in 2020. “We’re definitely working toward that — most definitely trying to make that happen,” he says of the possibility of Scott coming with his fourth album this year.

Check out our interview, where CA$HPASSION teases another JACKBOYS pack on the way, the release of his own project,  recording Stevie Wonder in Hawaii, and more.

Billboard: What’s Travis up to right now? We saw him working at his studio crafting beats on his MPC during the quarantine.

CA$HPASSION: Yeah, exactly that. That post is what Travis and I are on. We’ve just been cooking and making beats. He’s been full-fledged on the production, he’s trying to do the majority of everything for his next project. I pulled up on him right before the quarantine. We’ve been cooking from our home studios and going back and forth over email files.

How did the idea for a JACKBOYS pack come about?

The JACKBOYS [project] came about pretty quick in comparison to Astro. That was like a last-minute compilation. Travis was just like, “Let’s put out a compilation for the gang so everyone has a song before they roll out.” Now we’re doing another JACKBOYS. Maybe there’s another pack [coming].

I was a freelance engineer and was working at Paramount Studios in Hollywood. Someone just asked me to do his session, and I didn’t know who he was. He was this crazy-a– dude jumping around, and we just clicked instantly. We were doing Owl Pharaoh.

What was it like recording Stevie Wonder’s vocals for “Stop Trying to Be God?”

That was something from the bucket list. He came in and I recorded him on a rare guitar. He just started jamming with Mike Dean, and Travis was hitting the MPC. We were going for a while and I was tripping out. I feel like Stevie can see. He’s looking over and telling me to turn it up. I’m like, “Wait?!” Then he pulled out a harmonica and went in the booth for “Stop Trying to Be God.” There’s some more Stevie stuff that we did that I haven’t heard since we did it. We did a bunch of s–t.

It’s my understanding that a lot of Don Toliver’s Heaven or Hell album was recorded in 2018.

Yeah, a lot of these records were done in Hawaii while working on ASTROWORLD. The majority were pretty much cooked up in Hawaii. Then there was additional production, added verses and whatnot, but that’s really where I kicked in.

What was it like mixing the project alongside the legendary Mike Dean?

Honestly, that was a blessing. That’s always someone I’ve looked to coming up and working alongside. Just to be able to shadow him and get advice on mixes and learn everything is just nuts. He’s just a beast, man. I’ve been in the studio with him so many times and it’s just crazy.

How did your relationship with Don Toliver start?

Through working with Travis. I’ve been with Travis for the longest, so everybody he brings on, they’ll meet me and we’ll get to cooking. Don is a different beast. We got good chemistry and we have so many records together. I think [on the Astroworld Tour] is when we cooked for the first time on the tour bus. We just went at it, like, every day, and this guy knocks out records. You know, he’s on fire in 30 minutes to an hour.

What alterations are you making to his vocals after recording?

Not much — it’s really just tone. He’s singing with his stomach. It’s just regular with the compressor. He’s really an instrument. You don’t need to do much. Too much AutoTune would be bad for someone like Don. You have to keep that light.

Off the top of your head, were there any songs you were surprised to not make the cut?

There were so many songs that didn’t make the cut. There was this one song called “Clap” from the original [2018 Hawaii] batch that we made. That one was crazy. Travis wanted to get on it, but I don’t think he did. It was one of the runner-ups for ASTROWORLD along with “CAN’T SAY.” Then it didn’t even make Don’s album. I guess he went with “Euphoria” or something.

So was “CAN’T SAY” originally a Don Toliver record?

It wasn’t really a Don record. He went out [to Hawaii] to work on ASTROWORLD with Travis. We were just in a room cooking up records for Travis and he came in the idea and was like, “Yo, what’s this?” And then he just took it. I believe that was Don’s first time meeting Travis. Travis hit him to come out to Hawaii to work on the album. He went crazy and went in and caught the vibe.

How did Don link up with Eminem for “No Regrets” on Em’s album?

That was real last-minute. We literally recorded that on Wednesday, and that dropped the next night. Em heard Don, and his manager hit him saying Em wanted him on the record. Don was like, “What?!” He sent it and I was in the studio with him. We did that s–t so quick. He did it in 20 minutes and sent it back. That was the fastest turnaround I’ve ever done.

Do you come from a musically inclined family?

Not really. My parents just listened to a bunch of Mexican music here and there, a couple uncles played instruments. Since high school, I was rapping with the homies, forming groups, and making tapes. Then I decided to go to L.A. and get behind the boards and learn the engineering aspect so I could get a job and be in the mix. I came from Northern California.

What do you have coming up this year?

I’m actually dropping some projects. I haven’t dropped music in a couple years. I got an album coming in a couple months. I’m writing songs for a lot of people, producing and staying creative. Just keeping the juices flowing.

What do you think of Travis’ evolution growing into a global superstar?

It’s really mind-blowing. I never really think about it, but when I do, it’s crazy. About a month ago, I was like, “You did it. We’re here and it’s nuts. Remember when you first came out here?” Travis was the same first person when I met him before Owl Pharaoh was out as far as his drive, energy, and ambition for what he wanted with his career. That’s why a lot of people would clash [with him] because he was so passionate about what he was doing. He’s the same guy that was jumping on couches going crazy. That’s real-life inspiration. He’s pushing the culture forward.