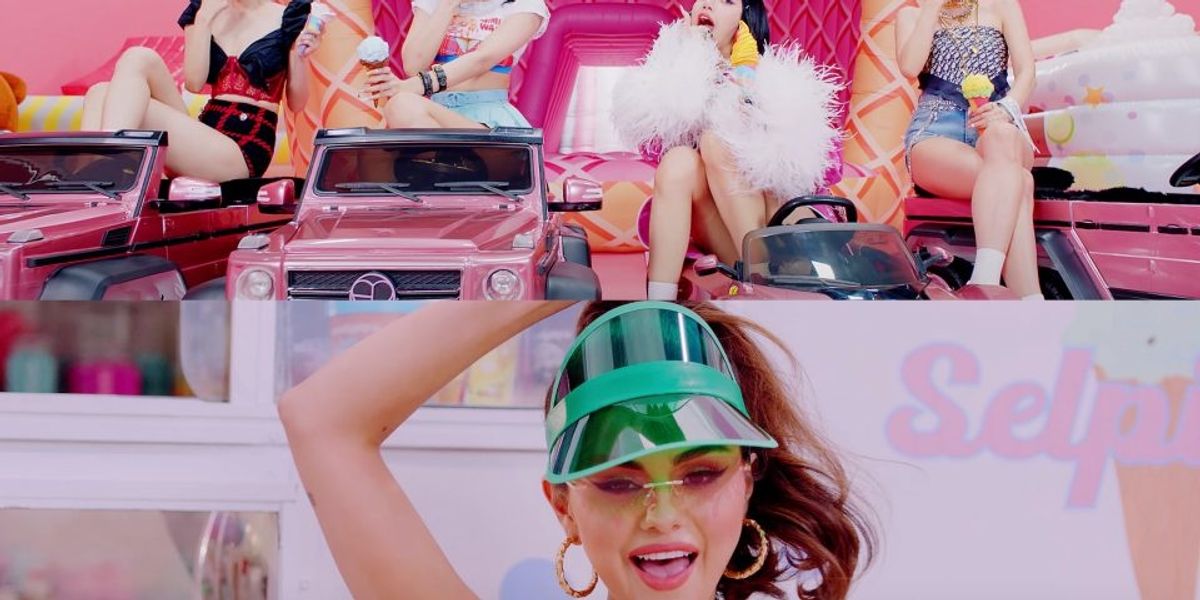 Both the former Disney star and the K-pop girl group are juggernauts in their own right, and the single came complete with ample buzz and an ambitious marketing campaign. To promote the single, Gomez purchased shares in the company Serendipity and launched her own ice cream flavor called “Cookies & Cream Remix.”

❤ this tweet to receive a reminder from @HBOmax to watch my new show #SelenaAndChef premiering on… https://t.co/pA3rMpSaM5

“Ice Cream” is, true to its name, extremely sugary. Visually, the “Ice Cream” video is playful and sweet, playing on the tried and true aesthetics of Katy Perry’s “Teenage Dream” era. But while “California Girlz” seemed purposefully overdone, a sort of commentary on 50s excess as much as a celebration of it, “Ice Cream” leans fully into nostalgia for the era of diners and drive-in movie theaters.

The song’s lyrics are absolutely bizarre, as they’re all articulated in teasing tones that resemble Charli XCX’s vocal stylings. “Brr, brr, frozen,” goes an actual lyric in the song. “You could double dip cause I know you like me. Ice cream, chillin’.” Somehow, these lyrics came out of a writing session with the super-talented Gomez, Ariana Grande, Victoria Monét, Teddy Park, Bekuh BOOM, and producers Tommy Brown and Steve Franks. These minds also came up with this gem: “Catch me in the fridge right where the ice be.”

Selena Gomez and Blackpink’s members are all incredibly talented—and talent isn’t an issue here at all. Gomez’s flawless vocals are extremely impressive on the chorus in particular, and Blackpink has a kind of electric synchronicity that has earned them global stardom. Gomez has the making of a cultural icon, and the Blackpink girls are each incredible dancers and performers, and all of them are capable of filling stadiums and generating ecstasy through their music.

At times, that electricity shines through. One of the best parts of the song is Lisa’s rap three quarters through, which—at its peak—approximates Blackpink’s usual infectious energy. But that moment is a brief respite in a song jam-packed with cliches. No one expects pop to confront social issues or solve any societal ills, but “Ice Cream” and its saccharinity feel a bit jarring when played out against the current state of the world.

That’s not to say we can’t have distracting, joyful pop, though. “Ice Cream” is pure sugar, and we all need escapism right now. But listening to it feels a bit like finishing an entire pint of Breyer’s ice cream in one sitting. Ice cream is amazing, as are Selena Gomez and Blackpink, but the product is just a little too sweet.

Blackpink and Selena can absolutely do better. Most of Blackpink’s discography—”How You Like That” is on a completely different plane from “Ice Cream.” They have immense range, as shown from the progression from “Kill This Love” to “Hope Not” on their previous EP. And previous collaborations with major stars, like “Kiss and Make Up” with Dua Lipa, are electric and dreamy. But “Ice Cream” just doesn’t take advantage of the nuance or range of its stars.

Hopefully, their upcoming album—released October 2nd—will continue in the direction of their pre-“Ice Cream” singles. Certainly “Ice Cream” will chart and provide much-needed summer entertainment for many people, and—before the mean comments come through—the truth may be that I am just too jaded and bitter (and perhaps, at 22, too old) to enjoy it at this moment in time. For now, I personally am about to go put “Hope Not” on repeat, eat an entire pint of Ben and Jerry’s and cry.