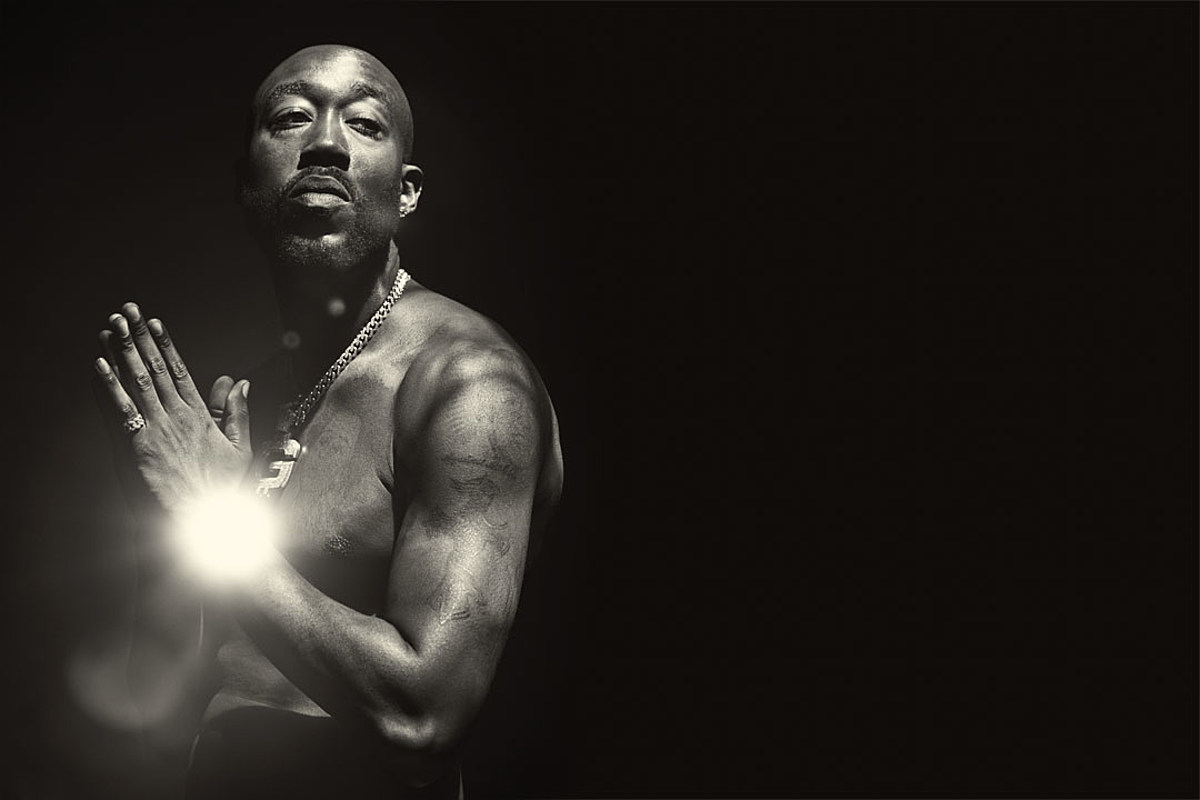 Conversations
As Freddie Gibbs gets further into his career, life just keeps getting better.
Words: Kris Ex
Editor’s Note: This story originally appeared in the Fall 2020 issue of XXL Magazine, on stands now.

Freddie Gibbs is your average rapper. He lives in Calabasas, Calif., a city so de rigueur as a haven for newly successful celebrities that it has become a punchline. Freddie—after years of releasing mixtapes capitalizing on street-level views of impoverishment and criminality in his Gary, Ind. hometown—speaks of himself in an aggrandized sense, with the mix of ego and confidence that comes from having defied the odds to become the kind of artist regularly covered by national platforms and debated by core fans as to his place in the pantheon of rhyme greats. For Gibbs, the answer is easy. “I’m definitely a great rapper,” he says. “I’m one of the greatest rappers of all time.”

Like most rappers, he rattles off improvable claims of his singularness and hood bona fides: “Ain’t really no nigga in the rap game that can go in the rooms I can go into—corporate or in the muthafuckin’ streets,” he declares. “And that’s facts.” The avowals rumble off easily: “I’m selling more vinyl than any nigga right now,” he says. As for what these ancillary sales of merchandising—including his forthcoming rollout of action figures—mean financially, he’s coy but proud. “I don’t even want to tell you what we doing on the merching,” he shares. “I make more money off merch than these rappers make doing a tour.” He claims to be doing so well that he’s becoming a blueprint for the rest of the industry. “Niggas studying my moves,” he affirms. “The label studying my moves. Watch how many rappers do action figures and comic books after this.”

It’s the kind of talk one would expect from a man who makes a comfortable living by proclaiming his greatness to others; a man who claims to have “king’s blood running through my veins” and compares his rapping ability to Bruce Leroy having “the glow” in The Last Dragon. It’s what you’d expect from any rapper.

What are we on?” asks Freddie Gibbs, as a way of a greeting. “Is we on quarantine? Black Lives Matter? What are we on right now?” The questions come off dismissively but not disregardingly, the observations of a man who’s already been jailed in two European nations over rape charges of which he was acquitted, after steadily maintaining his innocence. It’s the level gaze of a man who’d been shot at from close range while sitting in a car after performing a show in New York City; shot at by a man, which video security footage revealed to have been studying the rapper all night, pretending to be part of his entourage and getting within arm’s length. It’s a response of indifference to systemic indifference. While Amerika deals with the dual strains of a pandemic and it’s racist chickens coming home to roost—the opposing pressures of stay-at-home orders and ongoing nationwide protests against social injustice—Gibbs remains unflappable. He’s been through worse.

One of Freddie’s earliest songs was titled “Midwest Malcolm (Inhale),” and while it paid almost no homage to the assumed titular Black revolutionary leader, it painted a bleak picture. “Grew up amongst the crack babies and the Flintstone kids,” he rapped. “17th and Pennsylvania bitch, my whole fuckin’ block poor/Couldn’t afford a baby crib, I slept up in a sock drawer.”

“I’m the nigga I am today because of Gary,” he explains. “Now, do I like the fucking systematic racism and oppression which eventually leads to economic depression and violence and drugs and things of that nature? Nah, I don’t like all that shit. But if you ask me if I could I grow up somewhere else, I wouldn’t. That shit just made me whole. Gary just made me who I am.”

Though Chicago has been a hotbed for rap music and gun violence for some time, neighboring Gary, Ind.—just 25 miles away—is best known as the hometown of the Jackson 5, despite being considered the murder capital of the world in 1995. And, in the mouth of Freddie Gibbs, it is a dark hole of limited options that almost all lead to dead ends.

“There was nobody that I had an example of that was an entrepreneur in my family or on my block or anything,” he confesses. “The only entrepreneurs I knew was the Arabs at the gas station or the Koreans at the wig shop. It wasn’t no Black-owned shit. I was shooting for the stars. I was shooting to get out of Gary [from] the get-go. ’Cause I’m like, I’m missing something in life,” he expresses. “Something ain’t turning up for me or something ain’t registering where I’m at, so I need to move around. I need to do another thing or I’ma be subject to the same shit that my uncles and my father and they fathers was subject to, a never-ending cycle.”

As a kid, rap was not on his mind. “I definitely wasn’t beating on a goddamned desk, doing no freestyles in the lunchroom,” he reveals. “My high school thing was either trying to play sports, get some girls or smoke some weed. Mainly sports. When I was at that age—between like, 16 and 18—I definitely thought sports was the ticket out. I knew I didn’t want to go work in no fucking factory like my uncles. I knew I ain’t want to work in a post office like I was gonna do something. And that sports shit didn’t really work out.”

The sports shit didn’t really work out after he was kicked out of Ball State University for not attending class. “Only thing I was doing in college was going to football practice,” he admits about his time at school. “I ain’t really know class existed.” He also got kicked out of the military after being sent there by a judge as part of pre-trial diversion over small troubles he was steady getting into. He chose the Army because he didn’t like the Navy’s uniforms, but was dismissed due to failing drug tests. “That was kinda the plan to get kicked out of here,” he maintains. “I wasn’t going to no Iraq for no Clinton, Bush or Obama—none of them niggas. That wasn’t my life plan.”

It was then that he began to rap. “Being from Gary, you just can’t ignore that street element,” he says matter-of-factly. “So, I started hanging around a lot of street niggas [who were] always into some shit that I wasn’t necessarily into myself at first. A lot of those guys were going to the studio and making records and stuff like that, and I just start hanging around that culture and eventually started doing it myself. Niggas getting high, niggas freestyling, niggas selling drugs—it all culminated into one thing. It was like a culture in my city. You damned-near couldn’t rap if you wasn’t from the streets, ’cause you couldn’t be in the studio. It wasn’t like it is now where every nigga got a studio in their living room or in their bedroom. [Back then], you had to go in a street nigga studio around a bunch of other street niggas—drug dealers, killers, robbers. I’m from that for real.”

Freddie Gibbs is not your average rapper. He lives in Calabasas, Calif.—but only after having lived in less-glamorous parts of Los Angeles like Inglewood and South Park since 2008. “I ain’t just some rapper that came out and start living in Beverly Hills,” he boasts. “My face card [is] good out here in L.A. Niggas will see me in the hood by myself getting some Jamaican food.”

He says he moved to the suburbs to be in better school districts for his children—a now 5-year-old daughter and a 2-year-old son. “If it’s good enough for LeBron’s kids, it’s good enough for my kids,” he says. (He also wants more children—enough to have a “Gibbs tribe” because, after all, “I got king’s blood running through my veins, so why not spread it out to the world, man?”)

The trade-off for his current zip code is a sense of isolation. “My neighbor is like a thousand feet away from me,” he remarks. “I don’t conversate with these people. I knew everybody on my block in my neighborhood in Gary. I knew every mother, every cousin, every auntie and they’d whoop my ass just like my mama. It was a sense of family. It was a sense of community. I ain’t got that shit in the suburbs.”

The tension is apparent in Gibbs’ music—his voice and rhymes are dark and often humorless; but he also wears playful wigs and his music is bounded by a sense of loyalty and remorse. He may or may not be one of the greatest rappers ever, but he is one of the last pure gangsta rappers standing and one of the ones who address the “trap” as a trap for Black lives. In his earliest years, he sounded like Bun B. And that’s meant as praise—not many rappers can come out the gate sounding authoritative, avuncular and accomplished. He says it’s the rapper Scarface that raised him musically and it shows.

There’s a mix of internal turmoil and hood politics in Freddie that seasons his rhymes with hood-level social awareness and weariness. It was these things that led to him being signed first to Interscope Records in 2005 (he was dropped before an album was released), and six years later to (Young) Jeezy’s CTE record label before the two went their separate ways. But, it wasn’t until he collaborated with the reclusive producer Madlib for 2014’s Piñata that he broke through both critically and artistically. “I was on the outs with Jeezy—I was about to be dropped or whatever the fuck they call it,” says Freddie, who dropped his critically acclaimed album, Alfredo, with Alchemist in May.

“They wasn’t about to fuck with me no more and if the Madlib shit didn’t work for me, I wouldn’t be talking to you right now. It’d be a whole different kind of conversation. I had to make that shit work. I said I gotta challenge myself to rap on a whole ’nother level and rap differently than the whole rest of the game is rapping right now. I could have been doing shit like straight trap rap all the time. I love all of that shit, too. I rap on those beats, too. But I could have been stuck in a certain musical bubble, not versatile. And I didn’t let myself get stuck there. I was like, I got to be me and be the most versatile guy I could be, the most versatile guy in the game and that’s where I took it.”

Gibbs recently signed what he considers “a Master P deal” with Warner Records, and is set to release his first record under the deal soon, though he’s keeping the details—down to the title and release date—close at this time. “I ain’t never put out an album on a major label solo in my career. But, I been knowing how to survive in the cold. I been knowing how to survive when the shows ain’t rolling in, when people ain’t fucking with the music. I knew how to do that. So a lot of muthafuckas are suffering through the quarantine, but I’m not one of them. I was already prepared for this shit.”