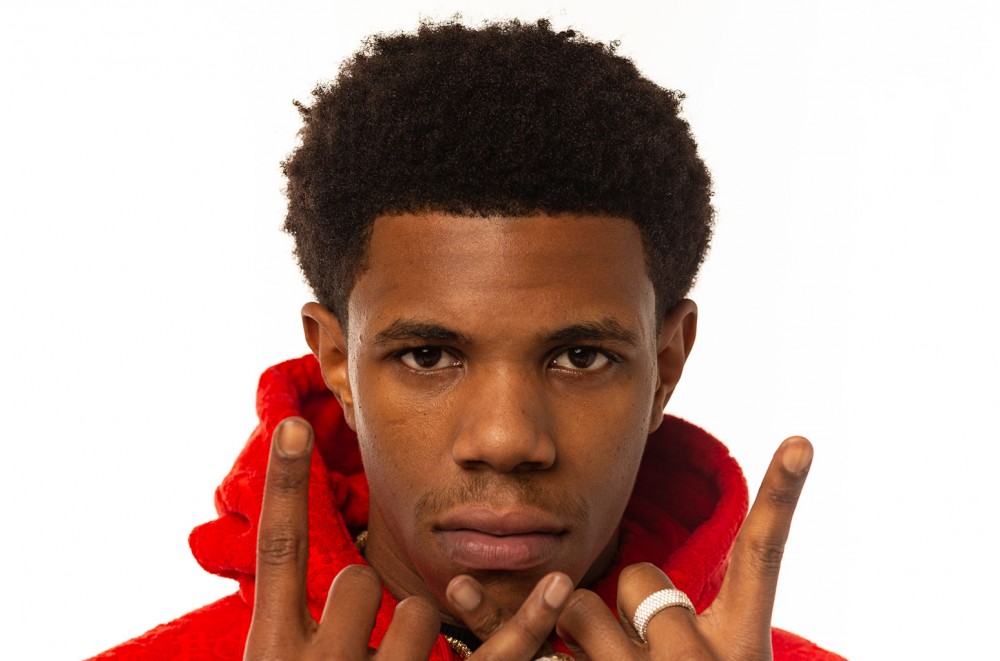 The thought of running New York City can spark a jolt to even the most timid person. Though the city's grit-and-grime persona can be a bit much to handle, some revel in traversing through the jungle if it means it can get them to the mountaintop. Though A Boogie Wit da Hoodie and his Highbridge family once salivated over that elusive crown, today, the glow doesn't seem to entrance him as much.

In the past four years, A Boogie has released three albums with his latest, Artist 2.0., out today in honor of his four-year-old daughter Melody and the release of his debut project Artist, which released on Valentine's Day in 2016. Despite only being 24 years old, Boogie has a Billboard 200 No. 1 album with his 2018 sophomore album Hoodie SZN and over 20 Hot 100 records to his credit. Known for his knockout hooks and radio-dominating anthems, the Bronx star has already etched his name as one of New York's prized talents. Despite his gaudy stats, Boogie isn't ready to put his name in the running as the city's ruler.

"Realistically, I'm not there yet. I still have some growing [to do]. Until I feel comfortable to say it, I'm not saying it," Boogie offers. Despite Boogie's humility, it's hard to ignore his insatiable hunger on Artist 2.0. Whether he's colliding with Lil Uzi Vert on the heartwrenching "Luv Is Art," or brazenly portraying life behind the trenches on "Streets Don't Love You," Boogie outclasses himself and his previous projects with his stout effort.

Billboard caught up with A Boogie to talk about his new album Artist 2.0, artists stealing his sound, maintaining his edge while working with pop stars, the importance of collaborating with female artists and more.

Artist came out four years ago and shaped your career. Why was it important to not only drop the sequel but on its anniversary of Valentine's Day?

First of all, happy birthday [to my daughter] Melody. That's the biggest reason to me for why I had to drop it on that day. Second of all, just to continue the tradition to drop Artist 2.0 on the same day — Valentine's Day — it's only right that any Artist [project] drops on Valentine's Day. I feel like I can't ever drop an album called Artist or anything unless it's that day.

What do you miss most about the mixtape, pre-stardom days?

There were no due dates and no time limits. That was the best thing about that. I miss those days when I can just make a song and the next day, just put it on SoundCloud to see what type of responses I get. The only thing that I hate about these days is that wait, man. The fans were waiting and they hated it. I hated that s–t, too, man.

When we spoke in 2018, you were going through your Jordan Year, having just turned 23. Since then, you had a number one album, you have a new child on the way and worked with Ed Sheeran and Khalid. Which part of your journey are you most proud of?

What you just mentioned right now: I love the fact that I can really switch lanes and play around with my sound, 'cause it's not all about just the tradition [of Artist] that I was talking about earlier. To me, it's all about the art and the creativity. So when I'm making my songs nowadays, it's not about "that one song," it's about the follow-up and the smooth ride home. Driving home in your car for a whole hour listening to an A Boogie album. That's the best part.

I can't just drop a single and call it a single no more. I don't even drop singles, I just drop songs whenever I wanna drop a song and I want people to hear it. I feel like a single is more commercial, you know? I'll do commercial when I want to do commercial. I go off my vibe and timing more.

When you do team up with pop titans like an Ed Sheeran and Khalid — who is also on this album — how do you make sure to keep your edge as a rap star?

You gotta know how to balance things, man. First of all, everything is similar. Every subject matter is similar. Like, music is like life. If you don't balance your album, it's gonna be all over the place. If you don't balance your life, it's going to be all over the place. You can't go from a rock star song into a certain vibe. You gotta blend it the right way and really make sure everything completes as one. That's my main thing: just making sure everything doesn't sound too crazy, but, at the same time, it's my goal to hit and reach every genre.

So being in the studio with Khalid, period, is a blessing coming from where I come from. I know he probably looks at it the same type of way, but I know I'm probably more appreciative 'cause I think I want it too much. My mom told me the other day, "Sometimes, you just gotta relax and let life guide you instead of trying to figure it out." I'm a Sagittarius, so I think a lot about everything. [Laughs.]

You went from being a surprise guest during Drake's Summer 16 Tour at Madison Square Garden to performing at the Knicks halftime show last month. Talk about that full-circle moment.

That was a real nervous feeling for me.

Yeah? You've done Barclays and big-name arenas before, though.

Because that was one of those moments like, when I was a kid, I always watched basketball. All I could imagine was me sitting on the damn couch looking at a halftime show and watching myself. [Laughs.] It didn't seem real. That s–t crazy. That was a little different, man. Performing on that big ass basketball court. It's a different type of setting, different type of stage.

Switching gears, you have a tight friendship with Roddy Ricch. What's so special about that relationship inside and outside the studio?

I'm not gonna say we both have that same exact mindset, but we both have the right mindset in a way where we could respect each other's space and open up around each other at the same time. You know how you are with your day-one friends? We could be like that, but at the same time, we understand each other enough to know, "Aight, I can be next door from him. He's working on his project, I'm working on my project and we just sit in our own spaces and zone out." But then, he can pull up on me like when he pulled up to New York and I'm in Jue Lan club.

Same thing when I go to L.A., I pop up on him and it's the same love. So anytime somebody treats the relationship like that, you gotta keep it going and keep that genuation. I said genuation. That's a good a– word. [Laughs.]

You once told me you were the King of New York. In what ways do you feel Artist 2.0 solidifies that status for you?

I'm not gonna say Artist 2.0 solidifies it, I'mma say my route. Just my route, period. My body of work with the whole four years I've put out [projects] 'cause it's not all about that one thing that you do, it's everything you do. You can't just do one thing one year, two years, it's a process. That's what I always say when people ask me why you're not so confident when people say you're the King of New York.

But when the time come, I'm really gonna know. I know a lot of people probably feel the same way, but they're not saying it like, "Aight, he's almost there." But everybody is cheering me on. Realistically, I'm not there yet. I still have some growing [to do]. Until I feel comfortable to say it, I'm not saying it.

You have the stats. You did the Garden and Barclays. So you can make an argument if you wanted.

You've vocalized your issues with artists today taking your sound. How did you manage to stay creative with Artist 2.0 knowing that people are emulating your style?

There's many ways to go about that. I've been through all those options in my head, going in circles and after awhile, I seem to understand now that you can't take none of that stuff serious. It's all a cycle from the beginning to the end. Look at T-Pain. After posting that [tweet], I realized something — a lot people reposted it and were like, "Welcome to the club."

So I thought about how T-Pain felt. He probably felt like everybody took his sound. I thought about it like, maybe we shouldn't feel this way — but I want the game to be a bit more competitive in a way where the sounds are different and not the same. It's like we all doing the same songs over and over. It's not fun no more. It's still fun to make music for me, 'cause I'm still doing my thing, trying different s–t, but I feel like if everybody tried different s–t, we can see who's really nice.

Why do you think people are scared to try different s–t?

[Laughs.] That s–t crazy, but people are probably scared to try different s–t 'cause… [Pauses.] I don't know. I can't relate, bro. It's crazy. I can't relate to that s–t.

You had a really tight relationship with Juice WRLD. What's your fondest memory of kicking it with him outside of music?

There's multiple, but I feel like the main ones are just the talks that we had — the deep talks that we had. Those memories ring in my head a lot. Even though I won't talk about the talks 'cause they were that deep, it makes me move a certain kind of way now. It makes me choose my ways different and s–t. All of us rappers are in that mood a lot where there's a lot of pressure on us and there's certain choices that we gotta make where we gotta talk about it sometimes with certain people. But he was a good person to talk about it with.

I'm hearing you're taking a break from music after this project. Is that true?

I'm taking a break but not too much of a break. It's just like an accomplishment. I want to do other things before I'm 30. I don't wanna wait until I'm 30 to start. [Pauses.] I'm not gonna tell you what I'm gonna do. I'm not gonna say it until I'm done.

At Made in America 2017, you told me you were gonna go back to school. Is that it?

Yeah, it's certain things like that, but I figure certain n—as are about that school s–t, too. I'm a businessman.

I'm gonna come back bigger. That's why it's not gonna be much of a break, it's gonna be a difference. It's not the time, it's what changed.