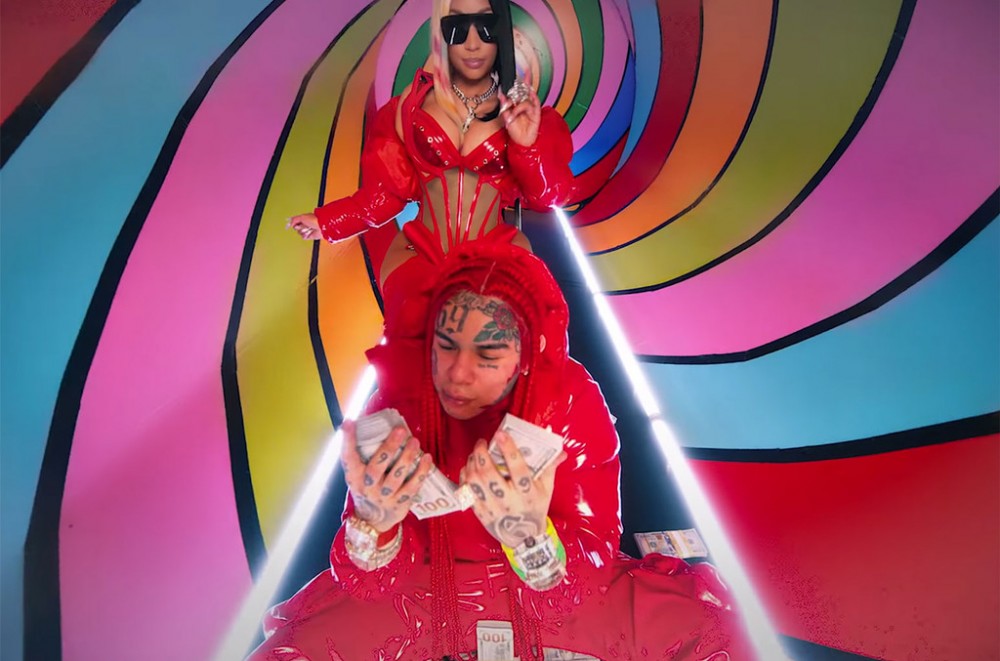 6ix9ine scored his career-first No. 1 hit on the Billboard Hot 100 this week (chart dated June 27) with “Trollz” featuring Nicki Minaj, who achieved her second leader within six weeks after Doja Cat‘s “Say So” remix.

The Barbz made “NICKI STILL REIGNS” trending on Twitter today (June 22) when the news broke out after she set the record in May for most Hot 100 chart appearances (109) needed for a first No. 1 song. They also celebrated “Trollz” earning the two rappers the biggest sales week of 2020 (since Taylor Swift and Brendon Urie‘s “Me!” back in May 2019) with 116,000 sold.

Minaj’s loyal fans gave themselves credit for the hype surrounding the song, while some buffs got creative with their celebratory efforts and shared original artwork based on the rainbow-colored music video and single animated cover art.

Check out 6ix9ine and Minaj’s fan reactions below.

Nicki: breaks 2 records in a day

She’s not a female rapper, she’s a Rapper
She’s not our idol, she’s our Sister
She’s not a bad guy, she’s Chun Li
We’re not a fandom, we’re family

They said she would never get a #1 & that her career was over & now 2 years later Nicki making history by topping the charts & becoming one of the best selling artists of 2020 in less than 43 days.. I just know her haters are seething

Onikafact: Nicki Minaj makes history as "TROLLZ" hits #1 on the Billboard Hot 100. She's the first female rapper to debut on top of the charts since 1998 and to top the charts twice within 6 weeks. Nicki still reigns!

Congrats @NICKIMINAJ and @6ix9ine. A number one single I can respect bcos 118k pure sales! PURE! No support from all the streaming platforms. Pure sales. Well done! #trollz

THEY HATE TO SEE IT @NICKIMINAJ @6ix9ine WHERE MY BARBZ AT???? WE FUCKING DID IT #TROLLZ pic.twitter.com/UVZGINWKiq

Thank you to all barbs that helped and pushed so much for this whole week getting Nicki Minaj her second number 1. Team Minaj was created to help due to the lack of support of big barb pages not helping. We are now signing off because our job here is done – TEAM MINAJ

5 Fanbases tried to block #Trollz from being number one. FIVE!!! Nicki and 6ix9ine has 118K+ PURE SALES. Sales like that just don’t exist now days. I’m so proud of the barbz for going this hard. & we aren’t slowing down anytime soon. Nicki still reigns.❤️