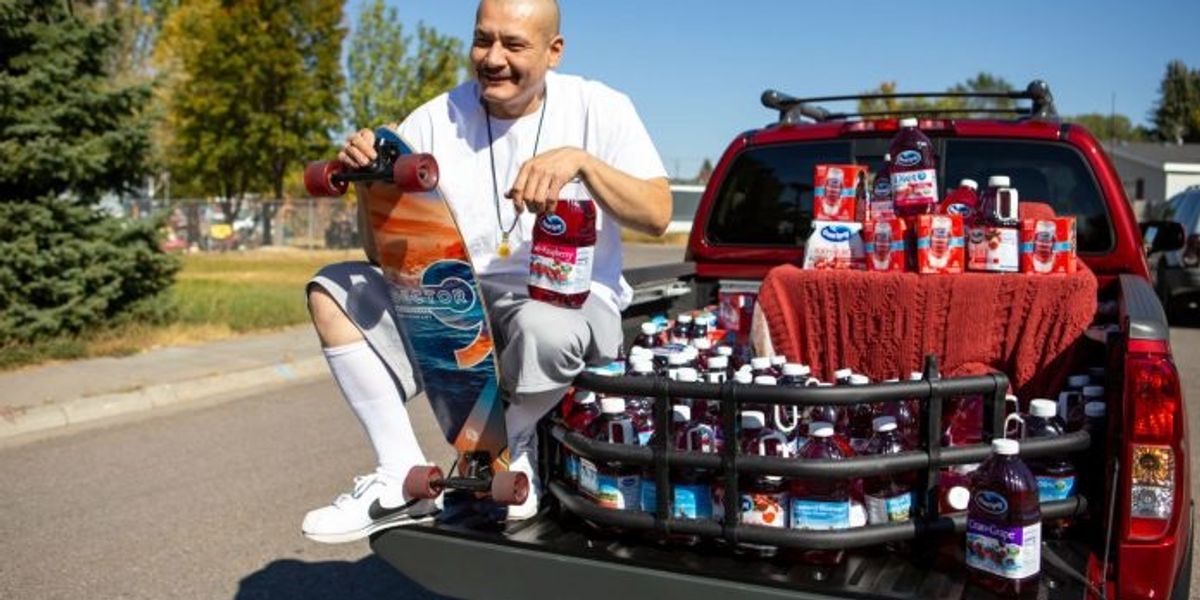 It’s become something of a legend at this point.

Nathan Apodaca was on his way to the Idaho potato factory where he had worked for over 13 years when his trusty old Dodge Durango’s battery went out.

“I was just sitting there, and I’m like, ‘OK, I’m not gonna sit here and wait for nobody to pull some jumper cables,’ ” he told NPR. “‘I’m not gonna flag anyone down.’ So I grab my juice, grab my longboard, started heading to work.”

The 37-year-old pulled out his longboard and a jug of his beloved Ocean Spray cranberry juice and began making his way to work. Then he took out his phone.

In the video, Apodaca almost appears to be floating through the air beside the highway. He turns away from the camera, taking a sip of juice. Importantly, vitally, “Dreams” by Fleetwood Mac plays. He turns back to the camera and begins to lip sync a few lyrics.

Apodaca, who had joined TikTok at the behest of his daughter, had been making TikToks for a few years, mostly during his lunch break. A few of his videos have been met with some success before. But the video he made that day would go on to change his life.

It would take Apodaca a few hours to upload the clip. After making it, he put his phone away and promptly forgot about it. “I almost didn’t post it, but I was like, ‘Let’s post it and see what it does within an hour,'” he said, thinking he could always delete it if it performed badly.

The now-famous clip racked up over 100,000 views in its first hour on TikTok. Today, it’s reached over a half-billion views and has over 134,000 tribute videos (and counting). It’s even generated its own challenge: the #DreamsChallenge, whereby people recreate the video’s chill vibes.

Those who have taken the challenge include a deeply grateful Ocean Spray CEO Tom Hayes.

The video has also earned some love from Mick Fleetwood and even queen Stevie Nicks herself.

How the “Dreams” Video Sparks a New Resurgence for Fleetwood Mac

Apodaca’s video volleyed Fleetwood Mac’s former No. 1 single, “Dreams,” back onto the charts, where it’s currently residing at a cool No. 21. The week of October 8, “Dreams”—the second song on Fleetwood Mac’s beloved Rumours—had its best ever streaming week, reaching 13.4 million streams.

Its virality only seems to be growing, and it’s pulling Fleetwood Mac’s entire discography up with it. Rumours, which was No. 1 on the Billboard charts for 31 weeks in 1977-78, has returned to the Billboard Top 20 for the first time since it received a tribute on an episode of Glee in 2011. Some of its other tracks, including “Go Your Own Way,” are also soaring in popularity.

Fleetwood Mac’s Mick Fleetwood, for one, seems thrilled. He created a TikTok and posted his own tribute TikTok in honor of Apodaca last week, which he posted with the caption, “420doggface208 had it right. Dreams and Cranberry just hits different.”

Recently, Fleetwood surprised Apodaca on a BBC interview. “One, we owe you,” Fleetwood said. “It’s such a celebration of everything. I’ve heard you talking about it, and it’s so joyous and fun.” But Fleetwood isn’t just grateful for his own band’s newfound virality—after all, Fleetwood Mac has never really needed any form of extra PR.

Mick Fleetwood thanks the man behind the viral video that’s made Fleetwood Mac’s Dreams a hit all ove… https://t.co/zCnXdWEXZz

“I just wanna say, outside of Fleetwood Mac, we owe you. It’s such a great story, and so needed,” he said. “In days that are really challenging…it makes people smile, and I’m so happy to be part of it. Congratulations on a wild, wild skateboard journey that has led us to talking today.”

“I feel blessed and I appreciate you,” replied a stunned Apodaca. “It’s just awesome.”

And on October 14, Stevie Nicks—the sole songwriter and lead singer on Dreams—joined TikTok to jump on the trend. Her video features Nicks tying up a pair of roller skates and of course, singing along to the track. “Afternoon vibe. Lace ’em up!” she wrote in the caption.

Needless to say, Apodaca’s life has not been the same since he posted the video, which has achieved the kind of attention and virality that millions of teens, executives, and corporations have tried to generate on TikTok to no avail.

Since he posted the video, Apodaca has received thousands of dollars in fan donations, which he is saving for a downpayment on a house. At the time he was making the video, Apodaca lived in his brother’s yard in an RV without running water.

Since receiving over $20,000 in donations, Apodaca has given his mother $5,000, bought his father a car, and has apparently already purchased clothes for his daughters and bought a new washer and dryer for his girlfriend. He attempted to give money to his sister, too, but she told him to focus on getting himself a house first.

Apodaca’s video and story has resonated with many different people for different reasons. It’s gained special recognition from the Native American community, many of whom recognized the feather tattoo on the left side of his head–a tribute to his mother, who is Northern Arapho.

“I just want to say to the Indigenous people out there, stay strong. I know times are tough right now, especially on the rez,” Apodaca said, according to Indian Country Today. “To the Indigenous people, get out there and make videos, go do what you want because I’ve been seeing a lot of Natives on TikTok just blowing up. Follow your fellow Natives, follow each other,” he added. “Be one with each other. One nation, we rise.”

Tributes and Fame Pour In

Apodaca’s personality—which appears to be comprised of 100 percent good vibes—has helped to make him into an increasingly beloved public figure following the video. He now has a publicist and a manager and has been creating merchandise. Though he still has his job at the potato warehouse, he’s taking a few weeks off work to see where all of this takes him.

“It’s just a video on TikTok that everyone felt a vibe with,” he said. “I’m happy that I could chill the world out for a minute.”

“Everyone” also includes a gubernatorial candidate in Montana, where Apodaca’s daughters, 12 and 15, live. In his video, Mike Cooney filmed himself drinking a bottle of Ocean Spray while looking out from the sunroof of his car, using the very 2015 Tumblr-esque caption “montana dreams.”

Music has always been a center of Apodaca’s life—he was raised imitating MTV dances and has always found solace in entertaining people—and now he seems poised to become a star in his own right. Apodaca’s personal favorite tributes include videos by Thugs-N-Harmony rapper Bizzy Bone and Jay and Silent Bob. Rapper Travis Scott has apparently also asked Apodaca to make a promotional video for his upcoming album. Now, everyone he meets, even elderly women in gas stations, seems to know who he is.

“I can’t go nowhere. It’s movie star-ish I guess, but I’m not trying to be that guy. It ain’t me,” Apodaca said of his newfound fame. “It’s just weird and crazy to me because I feel normal still. But I feel a little more comfortable now because I just don’t have to wake up and just worry. Everything seems like it’s coming in line now. It’s a blessing, no doubt.”

Why This Particular Video Went Viral

Why, exactly, did Apodaca’s video go so viral, and why does it continue to resonate weeks after it was posted?

Apodaca, vibing so hard and balancing such a precarious situation (the juice, the skateboard, life) so effortlessly, almost seems to emanate a Buddha-like energy in the video.

In many ways, that vibe also defines the song “Dreams,” which preaches a message of cool, mystical release. It’s a song about letting go, embracing one’s own crystal visions, and realizing that the person who’s wronged you will eventually come to regret ever letting you go. “When the rain washes you clean, you’ll know,” sings Stevie in the song. And clearly, Nathan Apodaca knows.

His video teaches us that sometimes, a stalled car can be an opportunity to vibe out and spread the love. When life itself feels like a broken-down truck, maybe it’s time for us to all find our own personal skateboards, cranberry juice, and a little Fleetwood Mac to carry us through.